Your Fight Scene Sucks, Fight Me! 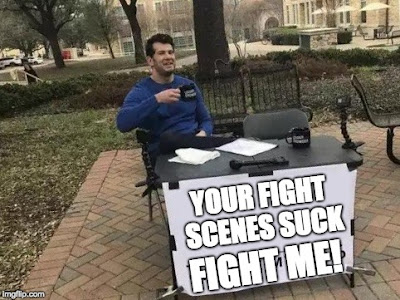 When watching a movie, if I can, I'll fast forward through a fight scene, otherwise, I'll get all glassy-eyed until it is over. Don't even get me started on comic book movie fight scenes. When reading, I'll usually scan through the paragraphs of a fight scene to see if anyone happens to die and then I'll catch up with the story in its proper place. Why? Because fight scenes suck.

I probably should have said, "Most fight scenes suck because they are too long and there are usually no ramifications for the characters afterward." Characters need to get injured in their fights and these injuries need to be long lasting, not forgotten by the next chapter. Also, fight scenese are way too long. I really don't know if "way too long" even covers it. Go to Youtube and search for "street fights" and you'll see that most fights are only seconds long and usual end in some sort of grappling, fleeing, or one-punch knockouts.

What fight scenes should not be are chapter-length episodes that one might read in a typical New York Times thriller. Let's join Jack Reacher after 778 words of fighting and beating three opponents in "Night School": "By that point the clock in Reacher’s head told him the fight had been running a little over four seconds." That's almost 200 words a second! Yawn, so much yawn. And there are still five more bad guys for Reacher to take down. I'm aware that these superman characters are supposed to be all that but having a fight drag on like this is as boring as it is preposterous:


Reacher exploded at the guy and got there three inches into the bat’s forward swing, which gave him time to catch its sweet spot in the meat of his palm, and jerk it away, and add his other hand, and stab the knob of the handle at the guy’s head like a rifle butt, and connect, like a ferocious punch through a single knuckle.

James Bond is infamous for its crappy fight scenes.

But why do fight scenes suck? JD Stanley has an interesting article on this topic. Stanley breaks the problem down into three sections: No Injuries, Too Much Dialogue, and Most people aren't Rambo. Stanley also gives a few suggestions on how to make your fight scene work. 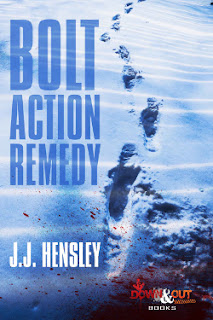 Here's a fight scene that worked, it's from JJ Hensley's "Bolt Action Remedy" (Down & Out Books).


“I’ve talked enough,” he said as he raised a fist and stepped forward to put me within striking distance.

Snapping my left foot forward, I managed to kick a heap of snow into the larger man’s eyes. He instinctively raised his hands to his face and I took one long stride and used my right arm to deliver a solid straight punch to his diaphragm. People engaged in hand-to-hand combat often make a mistake by focusing on hitting an opponent in the head. But if you ask any experienced fighter, he’ll tell you that he’d rather take ten punches to the head than one good shot to the body.

The human torso contains all sorts of important organs and most of them are protected by little more than thin rib bones. But most importantly, every fighter needs one very important thing to keep fighting: oxygen. If you take your opponent’s oxygen, you take your opponent. I took Mark Letterman’s oxygen and it was going to take him a while to get it back.

The fight continues a little bit afterward, but Hensley has this fight end almost a quickly as it started which is one of the reasons why it worked. The other, it was basically over with one punch. Maybe the fight lasted two seconds long which comes out to maybe 90 words a second which as a reader I appreciated–my eyes didn't have a chance to glaze over. 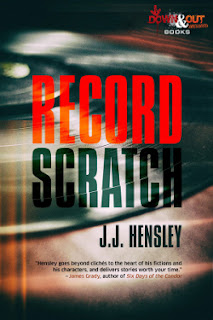 The other week, Hensley also had a good piece about how to write a successful action scene over at The Thrill Begins. This guy knows what he's doing.


Every time I write a fight scene, I think of the judo class I took or my first experience with boxing. Every…single…time. Each time, I can feel the leather of the headgear on my face and see the white strings dangling from the boxing gloves. Details like that make action scenes more authentic and relatable to the reader.

Are you writing a car chase scene? I bet at some point in your life you’ve smelled rubber burning and can describe it to the reader.

So please when you are writing a fight scene keep it short, keep it realistic and for god sakes have people get hurt. Otherwise, I might just tell you that your fight scene sucks. ;-)


I reviewed Hensley's "Bolt Action Remedy" last month over at Unlawful Acts and Hensley's latest book, "Record Scratch" (Down & Out Books) comes out in late October.
Posted by David Nemeth at 2:30 AM