American Static in your ears -- and more

First, I'm on the French radio waves, with a musical mixtape. Check it out.

Second, the newest episode of 7 MINUTES WITH is up. I chat with Jedidiah Ayres about movies, Holly West about the small screen, and Chris Holm about music. Check it out on iTunes or SoundCloud.

And our main attraction today -- Tom Pitts, whose AMERICAN STATIC is now available on audio.

I had a strange experience recently. I drove roundtrip from San Francisco to Los Angeles and got lost in an audiobook. Why is that strange? Because I wrote the book.

I’d always wanted to record my own audio version of my novels, at least I thought I did, but something always got in the way. Something? Let’s face it, procrastination got in the way, along with finances, equipment, and the pure hatred of hearing my own voice. 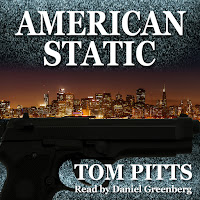 That last one may seem odd—especially coming from someone who’s got a live interview show up the on the internet, someone who’s sung for a rock ‘n’ roll band and is comfortable behind a mic—but I’ve never been able to playback an episode of Skid Row Chatter without shuddering. Can’t do it.

I’ve been told I read well at live readings, but those are short stories with arcs like a well-oiled joke. The audience’s laughs and gasps had a lot to do with my perception of how well I did too. Then I thought I’d maybe try one of my novellas first. You know, dip my toe in the water. Enter procrastination.  I finally faced facts; I didn’t possess the wherewithal to get the ball rolling.

So I finally took the leap with American Static. I put it up on ACX and found an actor, a pro. The search didn’t take too long. I received a handful of auditions and knew right away when I heard the man best suited for the job: Daniel Greenberg. Straight forward, not too much acting with the characters voices, but enough to let you feel them and grow to know them, and, above all, a focus on clarity.  I knew what I wanted in a reader.

You see, a few years back my wife and kids straddled two apartments, one in San Francisco and one in Sacramento. That made for a long lonely drive between cities, and a lot of time for audiobooks. I started my habit by digging used cassette tapes from bins at thrift stores (a practice I highly suggest, because when you’re paying a buck for a book, you’re likely to try something you otherwise wouldn’t) and then moved on to CDs. Eventually I’d burned through every thrift store in Sacramento. When I was forced to upgrade my car, I upgraded my audiobooks too, with Audible. Now I could listen to what I wanted, not just what I found. Anyway, the point is I listened to a lot of audiobooks and I found a style I liked, and that’s what I found when I heard Mr. Greenberg’s audition.  How was it working with a total stranger? Nice. Daniel was responsive, helpful with the process, and let me lean on his experience a little ‘cause I’m a rookie.

On the drive to L.A., listening for glitches or mistakes that may need correcting, I found myself getting lost in my own story, forgetting about the structure and the sentences, forgetting I wrote the damn thing ,and just enjoying the motion of the tale. I wondered, how the hell did this thing come out of my brain? It’s a strange thing when you listen to your own prose read back to you. You start off by being hyper-critical, second-guessing every inflection, every intonation. Soon you’re judging the narrator’s choices—I would have done it this way, I would’ve read it that way—until you finally let go and let the reader tell the tale, and before you know it you’re caught up in the action, waiting for whatever happens next. It was a treat just to be along for the ride. I hope—if you give it a shot—you’ll enjoy the same ride. 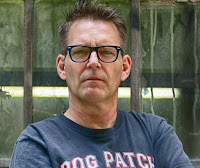 Tom Pitts received his education on the streets of San Francisco. He remains there, working, writing, and trying to survive. He is the author of AMERICAN STATIC, HUSTLE, and the novellas PIGGYBACK and KNUCKLEBALL.
His new novel, 101, will be released by Down & Out Books November 5th, 2018.
Find links to more of his work at: TomPittsAuthor.com