By Claire Booth
Since this is my last blog post before my novel hits bookstores, I thought I’d talk a little bit about the first words you’ll see.
Another Man’s Ground
It wasn’t my original title. The one I initially proposed didn’t gel with the art department – it was apparently difficult to illustrate. Fair enough. I did want a good cover, for obvious reasons, so I gladly went back to square one on the title.
That involved a lot of brainstorming single words that reflected some aspect of the plot. Once I had a decently sized list, I went to one of my favorite things in all the world and started the hunt.
There are lots of quotes about trees in the book. None of them fit. No luck with “woods” or “forest,” either. Then I moved on to “land.” “Soil.” “Dirt?” Ugh. No one had anything sufficiently relevant to say about dirt. Go figure. Then I tried “ground.”
Like a fair house built on another man’s ground; so that I have lost my edifice by mistaking the place where I erected it. –Shakespeare, The Merry Wives of Windsor, Act 2, Scene 2.
Oh, yes. My writerly heart started having happy little palpitations. I dug in. Turns out, that phrase has also been attached throughout the centuries to legal definitions of trespassing.
Trespass lies for an injury done by one private man to another; as entering on another man’s ground without a lawful authority, and doing some damage however inconsiderable to his real property. – The New Instructor Clericalis: Stating the Authority, Jurisdiction, and Modern Practice of the Court of King's Bench (1785)

TRES'PASS (v. int. from the French trespasser) To enter unlawfully on another man’s ground; – The New and Complete Dictionary of the English Language, by John Ash, LL.D. (1775) 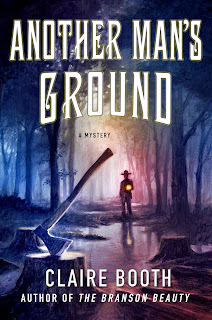 Another Man’s Ground, circa 2017, comes out this Tuesday, July 11. It’s available through Indiebound, at Amazon, Barnes & Noble, Books-A-Million, or anywhere books are sold.