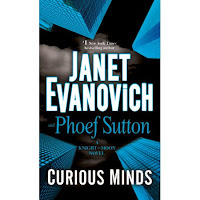 If  you read my post from last week, you’ll remember that I recently read a book “into the dark.” That is, I had zero preconceived notions of the book, the characters, the reviews, etc. I didn't look up any back story on the writing of the book or find any interviews with the author and her inspiration. I simply read the book because the back cover blurb hooked me with a single word (“irrepressible”) and I felt like reading the novel.

But how was it? That’s the point of today’s post.

Curious Minds is billed as “A Knight and Moon Novel.” You see what Evanovich did there? A nice play on words. The first person is Emerson Knight, rich billionaire playboy who is quite quirky. He is described as the cover of a romance novel come to life. I don’t know about y’all but the first thing I think of when I read that was Fabio. But Emerson’s dark hair also gave me a Ryan Gosling vibe. It didn’t hurt that I had recently re-watched The Nice Guys (still love it).

Moon is Riley Moon, junior analyst for the mega bank Blane-Grunwald, and up to her chin in student loan debt on account of her earning two degrees, one from Harvard Business and the second from Harvard Law. She’s whip smart and her Texas upbringing comes across in her attitude and her ability to shoot a gun, something her sheriff father made sure she knew how to do. Her favorite phrase is “Crap on a cracker,” and Emerson never fails to find her charming.

Her job is simple: babysit Emerson and his intense desire to see his gold in Blane-Grunwald’s vaults. His unwavering determination quickly reveals a secret that sends Knight and Moon on a race against time and across the country to uncover a dreadful secret before the bad guys catch up to them and take the out.

The story itself is a breezy sort of yarn, perfectly at home, say, on network television. That’s not a bad thing, mind you. I love network TV. But what you get with Curious Minds is a tale with little in the way of bad language or on-the-page violence. The bad guys often revert to saying what they’d do to a person and let that serve the reader’s imagination. The pace is rather quick with little in the way of scene-setting. Evanovich gave just enough description that I didn’t need a lot of extra words.

This book is, in some ways, like a romance. The plot is there mainly to serve as a means of throwing Knight and Moon together and letting them—and us readers—get to know each other. The will-they or won’t-they vibe is present, but not too oppressive. There are quite a few comments about modern pop culture that I found entertaining.

The tete-a-tete between the two is why you read a book like this and I wasn’t disappointed. Since I read the novel in five days—hey, I have to sleep and go to work!—it counts as the fastest book I’ve read in a long time. I usually had a grin on my face and thoroughly enjoyed myself with this, my first Evanovich book.

How much did I enjoy it? I’m already less than a hundred pages to the end of Dangerous Minds, the second novel in the series.


BTW, I've still not read a single review. I wanted to wait until I wrote my own. Now, my embargo is over!
Posted by Scott D. Parker at 1:00 AM