When You Accidentally Recommend a Bad Book

It was the perfect set up.

I’m a part of a book club with four other gentlemen all of whom love science fiction and fantasy. Some years back—eight years ago!—we all decided we’d love the opportunity to do outside of the office what we kept doing in the office: chat about SF/F book and movies and TV shows. We just thought it would be a good idea to do that somewhere other than our shared office hallways.

So we made a SF/F book club. But recently, another member and I got to talking: what if we expanded our sphere just a little bit. You know: make it big enough to include some books that weren’t exactly SF/F. Not Pride and Prejudice or a romance, but something “manly!” I pitched the idea to the collective and we all agreed.

And boy did I have the perfect book. No, I hadn’t read it yet because it was being published in June 2017. Yes, I had read other books by this author and I enjoyed them. The origin of the novel was perfect. Moreover, this book was tailor-made for our next expansion, and man did it have an awesome cover. 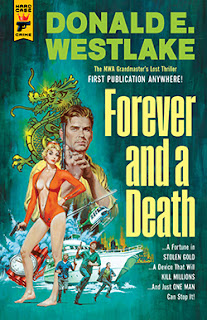 Yeah, that cover is one of the best ever done by Hard Case Crime. One of the guys said he’d read the book based on the cover alone. We all did.

But the book didn’t deliver.

Fair Warning: I’ll be spoiling some aspects of this story.

Let me put it another way: it didn’t deliver on the way the book was marketed. It was all but a dream team-up: crime fiction author extraordinaire Donald Westlake writing a James Bond story that was to have been Pierce Brosnan’s second Bond film. That film ended up being Tomorrow Never Dies, a movie I quite enjoyed, not the least being that Brosnan’s Bond had a “Bond Girl” in Michelle Yoeh who was an equal. When 1995’s Goldeneye was a bona fide hit, the producers needed to rush through the next movie. Westlake’s writing style didn’t match that pace and the two parted company.

But Westlake enjoyed the story he had created so much that he ended up writing a novel—Forever and a Death—using many of the pieces. He certainly couldn’t write an outright Bond novel…but he at least could have had a spy in it.

Forever and a Death isn’t a horrible book by any stretch. It’s competently written as one might expect from someone of Westlake’s caliber. But it just didn’t gel for me. It didn’t get very much either for my compadres. We all had a similar complaint: we kept waiting for one of the good guy characters turn out to be an actual spy. None were. You’d think if Westlake had crafted a good Bond story, he’d at least keep a spy in it.

Too many of the characters seemed to just be there for the purposes of the story. The leading lady—a twenty-three-year-old girl—is nothing like the woman on the cover. She served her purpose for our hero—a girl to rescue—then hung around for no reason other than to do a thing at the end. The leading man literally drops out of the story for a long stretch. The villain is probably the most fleshed out character, but you’d certainly like him to be really villainous. He’s half-hearted. And the ending is just about as abrupt an ending as I’ve read in a long while.

There’s an afterward where the producer who brought Westlake on board tells the tale of how this all went down. The best aspect of the Afterward is him saying which parts in the book we just read were in the final film treatment that was abandoned. You’d think Westlake could have done more.

Which brings back to my book recommendation: I wanted to love this book. I wanted my friends to love the book and go read more Westlake. I thought this book was going to be a slam dunk. It wasn’t. And I hope my friends will give Westlake a chance.

So, my lesson learned from this experience: Before I recommend a book, actually read it first.

Have y’all ever had a similar experience?
Posted by Scott D. Parker at 1:00 AM

This happens in my book club all the time. We assume because of earlier books that a new one by an author will be good--and it turns out to be a lesser effort. Or a book which has little to discuss. We never seem to learn that it works best if someone has read the book.

Hey, Scott -- I had the same disappointments with the book (especially with the marketing, I'd expected some kind of Bond-like figure in there) but still enjoyed it. It's interesting, especially with the information in the afterword, to consider the paths Westlake must have taken to get from the screen treatment with Bond front and center to the book here, the artistic choices he made. And I still enjoy Westlake's prose, of course--he just makes so much of it look effortless.

Still, I can understand--especially with a book club--how tough it is to navigate that giant gulf between expectation and what's actually in front of you. Still, I think there are benefits to reading a book that no one's read, everyone discovering it for the first time. In a worst-case scenario on the alternative side: I've been in book clubs where someone recommends a book they've read and love only to find that everyone else in the group HATES it--an awkward meeting to be sure.

Thanks for perspectives here, both on book clubs and on the Westlake itself!

I liked the book and gave it a good review but you nailed it with, "... it didn’t deliver on the way the book was marketed."