The latest in First World problems sees the internet collectively losing its mind over a girl.

Some people, it seems, think a girl can't be a doctor. Who knew? In 2017, apparently, there's still a list of what different genders are permitted to do. Online articles pulled responses from Twitter to talk about the backlash. 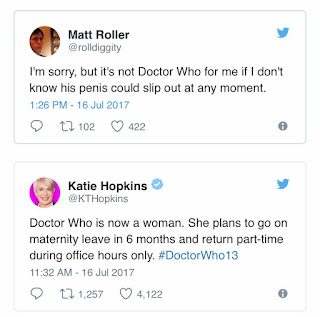 This brought to my mind The Shield. CCH Pounder's character "Claudette Wyms was originally supposed to be a man, but Pounder's agent called creator Shawn Ryan and convinced him to change the detective to a woman. However, Pounder still requested that none of the original dialogue was changed so her character would be able to "hold her own" alongside other male detectives."

Another thing this brought to my mind was the ridiculousness of people who are afraid to write about people of the other gender. People are people. They all have hopes and dreams and fears and likes and dislikes. There's a male in this house more terrified of spiders than any girl that lives here.

I suppose, for me, the idea of true equality means there's a smidge of hope for acceptance for some of us. If you thought sexism was a thing of the past, you only needed to hit the internet yesterday as people were losing their minds over Dr. Who, but the bench of those who perpetuate gender stereotypes is deep. One place I worked at was a perfect example. They were supposed to champion the rights of people with disabilities, but they had a clear preference for female staff who were cutesy and dumb. A supervisor told me early on that I may have a problem because I'd worked in more professional environments in the past.

If I smiled and laughed a little more and thought a little less I'd do fine.

For real. In this decade.

You know what I say to that? Fuck them.

There are no spoilers in the first few minutes of this; it starts with episode 1. The critical bit I was thinking of is from 4:48-5:45 approximately; as Sansa is getting her hair done, she moons over a boy.

It's so typical of what's almost expected of a girl when she has a crush; she loses her mind and rushes headlong into her obsession without thinking things through.

It's actually interesting to watch the bit just before that scene, when the king arrives and greets the Starks. Sansa isn't even a name to him; she's assessed on appearance alone. It is Arya, the rebel sister, the one who is more interested in the sound of a bow than the needlepoint in her hand, that earns her identity with the king.

The author behind Game of Thrones has taken a lot of criticism for how women are treated in his stories, but I find nothing to fault him on. He has female characters, like Sansa, who are trying to fit into the mold of society's expectations. He has other characters, like Arya, who have no interest in conformity. Martin said:

The books reflect a patriarchal society based on the Middle Ages. The Middle Ages were not a time of sexual egalitarianism. It was very classist, dividing people into three classes. And they had strong ideas about the roles of women. One of the charges against Joan of Arc that got her burned at the stake was that she wore men’s clothing—that was not a small thing. There were, of course, some strong and competent women. It still doesn’t change the nature of the society. And if you look at the books, my heroes and viewpoint characters are all misfits. They’re outliers. They don’t fit the roles society has for them. They’re ‘cripples, bastards, and broken things‘—a dwarf, a fat guy who can’t fight, a bastard, and women who don’t fit comfortably into the roles society has for them (though there are also those who do—like Sansa and Catelyn).


I think that Gwendolyn Christie pretty much nails her assessment of what Game of Thrones has really done with the female characters.

“This was a television show that would put women at the forefront,” the actress, who plays Brienne of Tarth on the HBO series, says in The Top 10 Game-Changing Game of Thrones Moments, a special on the PEOPLE/Entertainment Weekly Network (PEN). “We were going to explore female characters in a way that conventionally doesn’t happen.”
With characters like Sansa and Arya Stark, Daenerys Targaryen, Cersei Lannister, and Brienne, she says the show’s women are as independent and complex as they are powerful. “They wouldn’t simply exist as the mother role, the girlfriend role, the wife role, or the sister,” Christie explains. “They would be people in their own right.”


If for no other reason, Game of Thrones is actually well worth watching just to see the extent of the character development at work. The women who start out controlled, meek, submissive do not stay that way.

As my husband says, the show is really about the fall of the patriarchy and the rise of the matriarchy, because it's long been clear that the women are asserting control and having the most significant impact on the events that are unfolding in Westeros.

While it's fair for someone to say they aren't convinced about an actor who's earned a specific role, if they refuse to give them a chance just because of their gender, that's sexist.

There's a reason that The Handmaid's Tale entered the pop culture mainstream this year, and has become a symbol of public protests. It's tragic that in this day and age, in the western world, that women working for the White House earn 80 cents to a man's dollar. Not based on credentials. Not based on experience. Based on gender.

This, right here folks, is why my husband has been right in his Disney princess aversion. He never wanted his daughter thinking she just needed to be someone's little princess. He was never so sexist that he called her his princess. She wasn't reduced to being a man's possession.

Instead, they were watching Princess Mononoke.

If western culture is still so backwards that people are financially penalized for having ovaries, then we must cheer for the creators who are putting women at the forefront, showing that they can hold their own and do anything that a man can do. For me, it isn't about dominance. I love a great story about a man; I love writing male characters too.

But thankfully, it's now far more common for people to write about women who are more than some man's eye candy. Those are the women I want to watch. It may be that Game of Thrones is one of the first shows I have a really hard time choosing a favorite character from, but of the top five, only one man makes the list, and it isn't because there aren't a lot of great male characters. The bench is deep, which makes the fact that so many female characters

I personally haven't been a Dr. Who follower in the past, but I say that whether the new actress in the role works on not will depend on a number of factors, starting with the writing, and can only be determined once seen. For anyone that finds it hinges solely on the lead's gender, well, I guess they have to ask themselves why they are okay with perpetuating discrimination.

“And then there’s the whole issue of sexual violence, which I’ve been criticized for as well. I’m writing about war, which what almost all epic fantasy is about. But if you’re going to write about war, and you just want to include all the cool battles and heroes killing a lot of orcs and things like that and you don’t portray [sexual violence], then there’s something fundamentally dishonest about that. Rape, unfortunately, is still a part of war today. It’s not a strong testament to the human race, but I don’t think we should pretend it doesn’t exist... I want to portray struggle. Drama comes out of conflict. If you portray a utopia, then you probably wrote a pretty boring book.”

And perhaps, sadly, that's the part of Martin's stories that's more of a fantasy than dragons, because apparently we still live in a world where women need a strap on and flat chest to be treated as equals.
Posted by Sandra Ruttan at 8:23 AM

Ps the one tweet from that article may we'll be a joke. It still serves, though, because jokes are made in response to the public atmosphere and other responses to the situation. Also not the only dick comment I saw on Twitter or elsewhere. Sadly.