If you've been reading my weekly posts here for any amount of time, it's safe to assume you know two things about me: I love Tarantino movies, and I have major reservations about true crime as entertainment.

The recent announcement that Tarantino would be tackling the Manson Family in an upcoming film has left me deeply ambivalent. The things I love about Tarantino are the exact kind of things I can't imagine loving in a film about real people, real crimes, and real victims. The Hollywood Reporter states that "one of the stories" will be based on the murder of Sharon Tate, her unborn child, and four other people.

The copious amounts of fake blood, snappy dialogue, and brutal depictions of violence that Tarantino is known for aren't the kind of care I'd hope for in a true crime film. Lifetime Original Movies have made bread and butter of movies based on violence against women, and despite having an almost exclusively female audience, they over-sensationalize (and almost always over sexualize) their true crime stories. Imagine if they had free range to get as brutally violent as an R rated film? 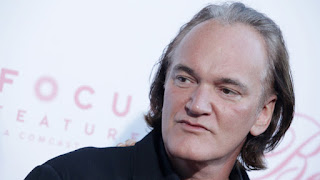 None of this is to say that Tarantino can't possibly get it right. Recent years have him going in different directions with his films. Where he hasn't felt the need to be historically accurate in his historical films, I hope he won't lean sensational in this venture into true crime. It's almost an odd move for someone like Tarantino. It seems like true crime is having a huge moment in popular culture, and he's jumping on the bandwagon. Tarantino has been accused of a lot of things (fairly and unfairly alike) but being trendy isn't usually one of them.

Given no precedent in his oeuvre to work from, it's impossible to know how this will shake out. I'm hoping for the best but fully aware I might be signing up for the worst when I inevitably go see it.  When the news notification popped up on my phone, I think I made a face. I've always thought crime fiction and true crime serve different purposes, and it generally makes me nervous when they cross too far. Given what I know of Tarantino from my long time love of his movies, I just can't imagine what this movie will look like - or, perhaps the problem is, I can. And it's not a look that makes me feel good.
Posted by Renee Asher Pickup at 3:00 AM

I hadn't heard this news. An interesting move for him indeed, and your reservations seem warranted, to say the least. Thanks for sharing—both the news and your perspectives here.

I have perhaps a different take on Charles Manson than most. Years ago, Manson used to phone me to chat. How that came about is a professor from the U. of Toledo, Russ Riesling, was writing a book about "Famous Drug Users in Their Youth." Included were chapters on Manson, Big Brother of Big Brother and the Holding Company... and moi. The way that happened was Russ was visiting Charlie at Corcoran for an interview and he happened to have a copy of my book Monday's Meal with him. Charlie saw my photo and picked it up and began reading it. He told Russ, "This guy is the real deal." (Well, duh... yeah... I'm an ex-con, Charlie...) Anyway, he asked Russ if he could "borrow" the book and Russ gave it to him. A week later, he called Russ to see if I would talk to him on the phone, and I said, sure. He began calling and we talked on and off for about a month until I got my phone bill and it was... substantial. My wife Mary was in shock and said we have to pull the plug on this guy and we did. I had no idea he was reversing the charges--when I was in prison we weren't allowed to call anyone so I just didn't know how it worked. Basically, my take on the guy is that he's boring and just a little punk. He's in safekeeping not because he's any kind of bad ass--he isn't at all--but because he'd be rendered room temperature in about five seconds if he ever hit general population. I had some interesting conversations with his cellmate, Roger Smith, the "Most-Stabbed Inmate in U.S. Prison History," who at least wasn't a punk like Charlie but had actually killed folks his own self and didn't send women out to do it for him.

I too love Tarantino. He's one of my favorites (although I think "Jackie Brown" was the last Tarantino film I really dug). When I heard about him doing a film based on the Manson family I had very mixed feelings. I really couldn't figure out why, and I thought maybe we've had enough of Manson, but no, you nailed it here. It's Tarantino's over-the-top take on crime fiction that I love but it's not something I would appreciate with true crime. So, yeah, we'll see. Thanks for an insightful post and articulating exactly what I was feeling.

Les - I can imagine how quickly the shine fades on someone like Manson once you actually get to talk to him. Especially when he's caged and without his crew. That sucks about the phone bills. All my (received) prison call were with phone cards or calling collect! I had no idea you could reverse charges like that without the other person knowing!

I'm with you, Renee. The moment I heard the news, I had simultaneous thoughts: why in the heck would he do this and I'll likely not even bother to see it. I'm not a fan of true crime material much at all, and I can't imagine seeing a film that celebrates Manson even in the slightest.