A Funny Thing Happened on the Way to This Blog Post

This is one of those weeks where I'm having trouble coming up with something to write about for this blog. That's a good thing, because it means my mental energy is being taken up by more substantial projects. So what I'm really saying is: my gain is your loss. Or something like that.

But something happened last night that was kind of funny. We were watching the season finale of Veep and my former shrink popped up in one of the scenes. I mean "popped up" literally--Selena Meyer's legs were up in stirrups because she was giving birth and suddenly his head popped up from between them. He was playing the delivery doctor. He's a psychiatrist by trade and thus he went to actual medical school, so in this case he's a doctor just playing one on TV. 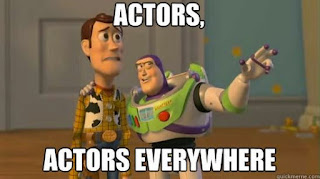 Mind you, he's a practicing psychiatrist who I'm pretty sure still sees patients. He also appears on TV news programs a lot to explain different medical issues. Like when Carrie Fisher's death certificate was released he went on TV to talk about the drugs she had in her system and how they might've contributed to her death. One of his career goals was to be a "pop-culture" shrink, and he's been fairly successful. Think Doctor Oz without the quackery.

But it's not like my doctor was "Psychiatrist to the Stars," at least not when I was his patient. He was the UCLA intern who assessed my situation when my primary care physician referred me to a therapist. He was at the end of one part of his training and invited me to stay with him when he went on to the next part of his training.

Wait, why am I telling you all of this? 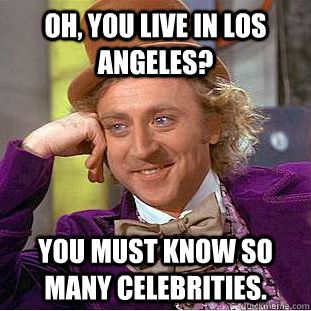 Anyway, that Veep scene wasn't the first time he just showed up on TV out of nowhere. Years ago when I was his patient, I saw him on a commercial for a bad breath remedy. He played the guy with bad breath who was grossing his dance partner out. Imagine asking your shrink if it's possible you might have seen him in a television commercial for something like "Amazing Breath?" Imagine him saying yes? That's pretty much what happened.

I'm not gonna lie, I started second-guessing our relationship after that.
Posted by Holly West at 3:00 AM