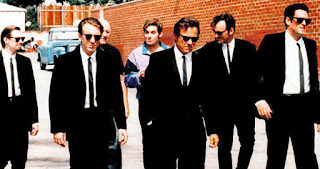 When I was in junior high we had a small, family owned video store around the corner called U.E.P. Video. I never knew what it stood for, but I'd regularly get a few bucks from my mom to go down and rent a video. There was never any real restriction on what we watched (though, I suppose my mom would have put her foot down on porn), so the small store was full of possibilities. My uncle has recommended From Dusk Till Dawn to my parents and we watched it together. He didn't mention it was a vampire movie, and none of us had seen the previews that made it clear. It was a huge, fabulous surprise. At least, for me. My parents hated it.

Armed with a few bucks and new knowledge, I went down to U.E.P. to rent Reservoir Dogs.

They wouldn't let me. 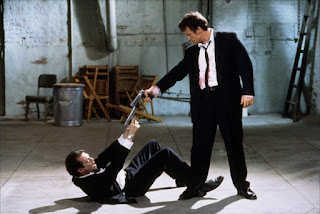 Now, I had rented R rated movies before, I'm sure of it. This was before you had to have an ID or parental chaperone to see R rated movies in the theater. People generally guessed that parents would do whatever parents do, and kids would probably find ways around it, and R rated movies couldn't hurt anyone too badly or require too much therapy in adulthood. But they wouldn't let me rent Reservoir Dogs. I was fucking pissed. I called my mom at work to tell her about this grave injustice, told her that now U.E.P. said she would have to sign some waiver letting me rent R rated movies or that she would have to rent them for me. And just what the hell was I supposed to do today between finishing homework and my parents getting home? How was I going to relish these beautiful hours when no one was fighting over the TV (I always lost).

My mom went down to U.E.P. on her way home from work to sign the waiver and pick the movie up. I got a call from the store, my mom on the other line, "What was the movie you wanted? River Rats?"

I corrected her, and she got the movie for me. I had to wait until the next day to watch it, because by that time of day, I was on the losing side of every argument about what would be on TV. The next day, I guess my mom was at work because I remember what happened so clearly.

I was watching Reservoir Dogs (for the second time), and my mom was standing behind the sectional listening to Tarantino's Mr. Brown give his theory on the song "Live A Virgin." Right after he says, "Dick, dick, dick, dick, dick, dick, dick" my mom took a deep breath, like she wanted to say something, and then shook her head. "I was going to make a comment about the language in this movie but I guess it's not any worse than what you hear in your own living room." She walked out.

I don't remember buying it, but I must have because I saw it easily fifty times that year in between sampling all of Tarantino's movies and dipping into Robert Rodriguez's oeuvre as well. I had the most fun showing them to my dad who loved crime movies and had no reservations about watching Tarantino wax philosophical about big dicks with me sitting next to him. As strained and tumultuous as my relationship with my dad was, we could always have a good time with Tarantino or Rodriguez. Always.

So it's the 25th anniversary of Reservoir Dogs. I haven't got to watch it again this week because I've got a sick kid at home who isn't sleeping at her regular times and I'm zonked by the time I get her to bed, but I could probably recite the movie from first line to end line (including Mr. Pink begging for mercy outside the warehouse at the end). I told my brother recently that Reservoir Dogs was always going to be my favorite movie because it's been my favorite movie for so long. There's so many memories attached to it, it opened so many ideas for me. I know it's maybe a little ironic, being the outspoken feminist, and citing the one Tarantino film were not a single woman exists in the foreground as my favorite, but it is what it is. It fascinated me, it gripped me. The dialogue lit me up (I was already experimenting with writing novels by then), and everything about it was exciting. It held up to second, third, and thirtieth viewings. Even now, all these years later, I find new and different things to love about the story, about the way it's shot, about how fucking insane Michael Madsen is as Mr. Blonde.