For those of you who don't know, Bouchercon is the World Mystery Convention. This year's Bouchercon starts September 15 in New Orleans.

DSD folks are going. Jay Stringer is going. Holly West is going. Kristi Belcamino is going. Others, too. Maybe McFet?

Back in 2010 I went to NoirCon, a smaller affair in Philadelphia. I wrote a thing about it then. Then five years later I tried Bouchercon, which was in some North Carolina hotels.  I did not write about last year's Bouchercon, as no one at the bar offered to buy me a drink and it made me pretty sad and so I didn't like the idea of reliving that, you know?

If you want to go to Bouchercon in New Orleans, you have until September 9 to register. Holly West is promising karaoke. Also, there will be a Noir at the Bar reading thing, along with all the usual panels and signings and cosplay. Keep up with everything B'con on Facebook.

As I was saying a second ago, I won't be at Bouchercon this year. If you're not set to attend, you're missing out on the fun. But fret not, for you can still enjoy a bit of the fun and pretend you're there.

Have some cocktails. (Again, if you're like me, you'll have to buy your own as I had to at the bar because, well, I don't know why. Who cares? Best to not dwell on it. I mean, people say all year how cool it would be to meet you and how the first round is on them and then you go to the trouble of showing up and you're just kinda waiting and talking and being, you know, utterly charming (as if you have any control over your high charm levels) and you're just kinda waiting still and nothing and so the bartender makes the rounds and asks what you want and no one offers to buy you a drink and you just sit there like a moron like when you were in fifth grade and no one wanted to dance with you in the gym which is fine because you don't need other people anyway and besides maybe the second quarter of the junior varsity game isn't a time for dancing or whatever).

After you've had some drinks, enjoy some Noir at the Bar readings:

And for a panel/interview feel, here's Laura Lippman and Michael Kortya from Bouchercon a few years back, B'Con 2008 in Baltimore:

And if you're going to miss New Orleans Bouchercon, you can still catch the fun in Toronto in October 2017. Looking at the Toronto B'con page, the Sheraton location seems, um, homey? 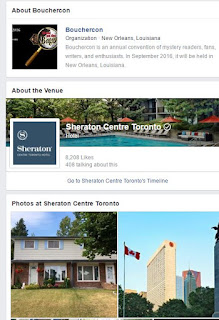 I'm feeling very guilty now for not having bought you a drink.
I'm only moderately relieved by having indeed served you food when you came to the Burke Library event.
I say "moderately" because you and I both know the food was leftovers.

Next time I see you, the first round's on me.

And I mean it this time.

Shit. No question, I owed you a drink. At the time, I was aware that you only had one day there and lots of people to see/meet and I didn't want to monopolize all of your time. Because I would've. But I still could've bought you a drink.

I've got an idea, Holly. You and I can buy one another a drink and we'll just toast northeast in Steve's general direction. Then everyone is happy, yeah?

Holly & Art,
Now THAT sounds like a great plan

I'll be in DC on the 28th. No car...but I owe you dinner. You should drop all plans and tell the fam to cool their pies. Let's do thissss

I would have bought you a drink, but your arrival at B'Con last year was such a shock I nearly died. Or whatever it was that felt like near death. I really did want to hang with Chad and you.

Hope to meet you again.

I'll buy you a shot of Draino.

I was waiting for an elevator and Weddle came behind me and startled me. That's why I bought him no drink.