This past week, our good friends' son stayed with us while his parents took his older sister to college in Massachusetts.

It's been a long time since I've felt like this much of a loser.

It turns out that beyond regular meals and rides to and from school, I have nothing to offer a fifteen year old boy. Except, perhaps, for when I was querying agents, never have I worked so hard for approval and gotten so little back in return.

It's not him, it's me. He's a good kid. Polite, respectful, a little bit sassy, funny and observant. But not overly talkative. Which left it up to me, of course, to fill the silence.

We took him to sushi on Saturday night. I struggled in advance to come up with topics we could discuss during dinner. How the hell was I gonna engage this kid for the duration of a meal out? I settled upon telling him about an idea for a story I had, set in a high school and based very loosely on The Good, The Bad and The Ugly, which we'd watched earlier that day. I asked him for feedback: what do high school kids really want? What motivates them? What do they care about? I don't have children, teenage or otherwise, so I'm pretty clueless about kids in general and I was hoping he could give me some insight. 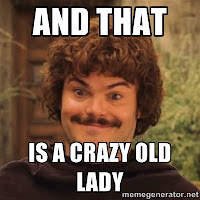 I know. It was a lot to ask and I'm pretty sure he was sitting there trying to figure out a way to get the crazy lady to shut up and drink her sake. But really, my only goal was to try to come up with a plot for my story. Explaining that didn't help open him up.

I still don't know what motivates teenage boys, but I'm pretty certain it isn't discussing story ideas with middle aged female writers. With help from my husband, our dinner conversation devolved into devising methods of tricking our Fitbits into recording steps while we were just sitting there.

At some point during his visit, I texted his mom: R is spending a lot of time in his bedroom. Is that normal?

She assured me that it was, but I still felt guilty, as though I'd locked him in there and wouldn't let him out except for the bowl of gruel I set out in front of his door once a day.

So many of my conversations with him started with, "When I was a kid..." In some ways, I share a history with him since I've been friends with his mother since we were nine. Turns out he wasn't very interested in my reminisces about his mom and grandparents and high school (he attends the same one I graduated from).

Our remaining discussions consisted of me asking what he wanted to eat. At some point, I said, "I guess grown-ups spend a lot of time thinking about what to feed people." He declined to comment.

During the week, I learned one thing with certainty: Despite all my efforts against it, I have not only become a grown-up, but also, my mother. The realization is horrifying. By necessity, actual parents must come to this understanding early and get used to it to some degree. But in my day-to-day life, I labor under the delusion that I'm young and hip and oh, so with it. Never mind the fact that I wasn't hip or with it when I actually was young.

It's a cruel lesson to learn all at once, with no warning whatsoever. Hey--I just agreed to watch your kid. Questioning my own identity wasn't something I signed up for.

In the end, we all survived and it was a good week. We watched lots of TV and movies and I got to know a great kid a little bit better. And let's be honest--it's probably time I grew up some.

Not too much, though. I'm going to New Orleans next week and I intend to laissez les bon temps rouler.

Email ThisBlogThis!Share to TwitterShare to FacebookShare to Pinterest
Labels: being a grown up, sushi, teenagers, The good the bad and the ugly

Enjoyed this post, Holly--and also meant to reach out and say how much I enjoyed "Don't Fear the Ripper," such a good story!

Boom! You just made my day. Thank you so much, Art.

We go days and days without seeing our teenagers

I don't know how parents do it.

Holly, I have 3 14-year-olds and a 16-year-old. Trust me, it's not you! Our kids pretty much think we know nothing right now! They are sweet and exasperating and yes, really like to be in their rooms. You're a nice friend for helping and he probably took more away from the experience than you think or that he'd ever let on. Boys are like that ;-)