When Bad Guys Go Too Bad

Before I begin this week's post, I'd like to announce that Thomas Pluck will be sharing Wednesdays with me starting next week. I always enjoy when Tom writes a guest post, so I think we can all look forward to some insightful and entertaining content from him. Welcome, Tom!

The following post will be a bit spoiler-y, particularly if you haven't watched the last-ish seasons of House of Cards, Nurse Jackie, Breaking Bad, The Sopranos and Orange is the New Black. No plot revelations, but I'll be discussing character development of these shows.

I'm sure I've said this before, but I love a flawed protagonist. They are, in fact, my favorite kind of protagonists. I'm attracted to misfits and characters who walk the thin line between good and bad. Characters who are fundamentally good but for some reason do a lot of bad things--maybe because they can't help themselves or they can't get ahead in life or they don't feel they have a choice. Maybe it's their job. Characters who are somehow able to justify the bad things they do in such a way that the audience is able to root for them in spite of their flaws.

Take Tony Soprano. In the beginning, he was the perfect flawed protagonist. Admittedly, he was more bad than good, but that works for me. He did terrible things, but dammit, he really loved those baby ducks. And his struggles with his mother? I'd watched my own father have similar ones with his mother. I could relate. Tony was so simple and yet so complex and I loved him completely.

And while we're talking The Sopranos, what about Nurse Jackie (played brilliantly by Carmela Soprano--er, Edie Falco)? Another superbly flawed character whose drug addiction causes her to lose nearly everything. At first, the awful things she does are balanced out by her brilliance as a nurse but eventually, she hits bottom and we're left to wonder if redemption is possible. Has she pushed us too far, like she pushed away everyone else in her life?

Which brings me to the point of this post: what happens when characters go so bad they're no longer enjoyable to watch/read? I'm not talking about the bad guys--the guys whose job it is to be terrible. I'm talking about the so-called good guys. Flawed or not, the ones we tune in for each week (or turn each page or buy each book in a series) because they're compelling and sympathetic in spite of the bad things the do. In some cases, because of it.

In Tony Soprano's case, it became increasingly harder to empathize with him as the series wore on and that made him less interesting. There was no chance of redemption for him as a character because he'd pushed me to my limit and he wasn't giving enough back. Where are the baby ducks when you need them? I was ready to let him go before the series actually ended (though I loved him so much in the beginning, I still wanted him to live on in some kind of alternate universe, even if I no longer wanted to watch him).

I'm not saying that a character shouldn't, over the course of a series, become unredeemable. Often, that's a compelling arc and I'm into it. But as writers we need to be cognizant of when a character has reached the pinnacle of his/her evil and not let it drag on too long. Know when to cut him off at the knees. He can't go on indefinitely without consequences (and sometimes, the consequences are the end of the series).

A good current example is House of Cards. At the end of season three, I wondered if perhaps the Underwoods had become truly evil and whether I wanted to watch them any further. They no longer seemed to have any moral dilemmas--their only problems were keeping the power they'd gained and not getting caught for their many misdeeds. I'd watched for three seasons thinking they were working for some kind of greater good only to learn that they themselves were the greater good. Womp womp. But then, the season three finale ended with a good cliffhanger so I watched season four. Unfortunately, I think I'm through with the Underwoods--the series should've ended this season (and if you've seen it, you know they had the perfect opportunity). 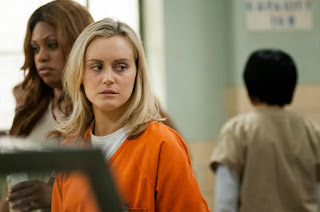 I also mentioned Orange is the New Black. We're half way into the latest season I'm having trouble with the main character, Piper. Perhaps the goal was to harden her as the series proceeded (because let's face it, she is in jail and even if the inmates are magically able to have sex whenever they want it's still taxing) but she's lost most of the vulnerability that was so appealing at the beginning of the series. She's one-dimensional now. Not complex and not interesting.

Want an example of a show that did it right? Breaking Bad. The series ended at precisely the right time. I could still root for Walter because he was in the end stages of his disease and well, that's got to fuck a person up, but really, he'd turned so bad that having him live on would've been tedious. His story was finished and it was time to kill him off and move on.

I'm aware that I've only discussed television shows here. But these rules apply to books, though maybe not in the same way, unless you're talking about a series. Thinking about these issues reminds me to work harder at character development. Add some subtlety. Maybe a quirk or two. Good fiction demands we magnify some of qualities for effect, but no one is all good or all bad and we need to keep this in mind. We're creating characters here, not caricatures.
Posted by Holly West at 3:00 AM