When we were cool: FASTPITCH

As someone who reads and writes about early to mid-20th century baseball, I dug the idea of FASTPITCH, Erica Westly's fabulous, amazing new book.

A hundred years back, towns had their own baseball teams and communities rooted against each other on the field. Heck, nearly everything was semi-pro then. You still get some of that amateur feel in the Cape Cod League and the Tidewater Summer League and so forth, but you don't really get that "town pride" that you had back in the 1920's, it seems. (Get off my lawn, etc.)

Westly's new book (which I totally lurved) shows you that feeling again, but also shows you the people who played softball, the companies that fielded teams, the atmosphere that made professional softball so cool, so cruicial to what made those decades such a cool time to be alive.

I've been looking for an old Brakettes jersey since I read the book, by the way. And the folks at Jezebel have a swell interview with Westly up over at their site. 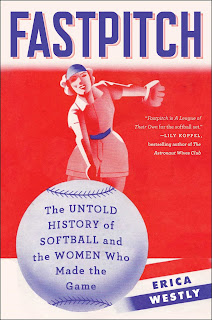 Q: One of the women you follow is Bertha Ragan Tickey, and you open the book with this image of Bertha and the height of the Brakettes from Stratford, Connecticut, who were sponsored by the company Raybestos. Clearly the company was a major part of the town’s economy, and it seems like that team was really a culmination of this type of experience, how they built it up into a major local attraction.

A: Exactly. There’s a town pride element to it, too. Starting in the ‘50s and then going into the ‘60s where more people have televisions at home, not that they didn’t follow the professional teams from the nearest city, but people didn’t have the same need for the small town teams as much. But in the ‘30s, ‘40s, and ‘50s, it really meant something to have these softball teams from your town winning at the state and national level. That was really a big deal. It made front page on the newspapers and they really wanted those teams to be as competitive as possible.

What is heart-breaking is that there aren't many options for a softball player after the Olympics. A football player can continue his professional career by playing in the NFL, but the softball player doesn't have the same options. You have the National Pro Fastpitch League, with a whopping six teams. There was a time when fastpitch softball rivaled baseball, when players were treated like celebs.


Hey fans, we have a camp coming up THIS SATURDAY out at Scrap Yard Sports! Register: https://t.co/f2WIMQAg28 pic.twitter.com/6HJnK2GwVz
— Scrap Yard Dawgs (@ScrapYardDawgs) July 21, 2016

Try finding them on ESPN, though. Or Monday Night Fastpitch.

If Westly's book were only about the history of the game, it might have made a good essay. Instead, she develops the story and shows us the people who made the game what it was, shows us the time period in which the game thrived, and, more importantly, shows us in great detail what we're missing now -- and what we still have that we can enjoy.

So, if you can get to a fastpitch game these days, do it. Follow NPF on Twitter and keep up.

More: Erica Westly
Posted by Steve Weddle at 7:17 AM

This looks like a good read. Just what I was looking for.