Small details about my characters are the ones I have the hardest time nailing down. Are they drinkers, smokers? I tend to have that handled straight out of the gate (most of them are, so that one's easy). Do they listen to heavy metal or like sci-fi movies? How the fuck should I know? So, working on the current WIP, I knew the male lead had tattoos, but I had no visual in mind for them. Of course, the need for that information comes quicker than you plan for.

I don't know what I was expecting when I started looking up "prison tattoos", because we've all seen faded stick n' pokes and teardrop tattoos, but I ended up learning some interesting stuff.

The issue is, if you're prison tattooed character isn't part of a high profile gang, a white supremacist, or a Russian, there's not a lot of standard fare - just a lot of crappy tattoos. So, while taking a break from the writing I read about Russian Gulag tattoos because I'd had some interaction with them before and they're fairly fascinating.

Inside a Russian prison, the tattooing process started with the ink - burnt rubber made into powder and liquified with urine, and was carried out like any other stick n' poke tattoo would be done. A long, painful process of having your own urine jammed into your skin. Now, prison tattoos are supposed to be kind of badass, the ink a con gets behind bars can't compare to the ink you get in a clean shop with a talented artist and real ink, done with real guns. But Russian prison tattoos take this shit to another level.

My guy? Well he's just a thief from Indiana. He's got a bunch of faded out stick n'pokes that are totally urine free. Simple designs that we often associate with prison tattoos - but check out the detail on some of these Russian prison tattoos: 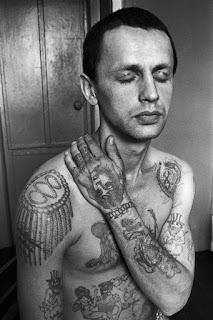 I saw the epaulets a lot, which denote rank. Unlike most tattoos, Russian criminals insist their tattoos mean something - and apparently, wearing one without meaning (or with false meaning) could get a your ass handed to you in jail. 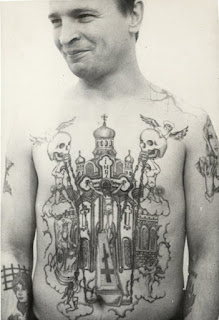 Even seemingly religious tattoos are code for things like prison sentences (the number of cupolas on the above tattoo reference number of times in jail, or length of sentence) and types of crimes. The Virgin Mary signifies a thief, the tiger "aggression against police."

It's all a lot more  complicated than neo-Nazis with SS symbols on their necks and a hell of a lot more creative than the popular MS 13 that signifies - you guessed it - that the wearer is a member of MS-13.

What's interesting about the Russian prison tattoos is that many, if not most, of them are downright beautiful. The Russian criminals took their tattoos seriously, and it shows.

Renee, ever see Cronenberg's EASTERN PROMISES? Good stuff in it about Russian criminals and tattoos.