What to Do with My New Finished Story?

For quite a while, I had trouble figuring out what to do with a story I'd completed. The reason for the difficulty? The story's length, an unfortunate 13,000 words.  Not that I consider the story's use of language unfortunate, but its length, neither a short story nor a novella.  The story is an in-between thing some people call a novelette. A novelette is a perfectly respectable literary term but it's one I never liked. Though it does mean, according to some dictionaries, "a brief novel or long short story", it also means, in other dictionaries, a work that is "typically light and romantic or sentimental in character". This story, called "Summerfield's Film", has humor but it is not especially light, and it is neither romantic nor sentimental.

So I had this thing, this long story, and I felt I'd written it pretty well.  I'd spent a good bit of time polishing it and then I sent it to someone I trust, and in this case paid, to look over for more editing.  He did almost no editing and expressed strong enthusiasm for it, as did the two friends I showed it to for their feedback. One of these two is a novelist, the other a guy who writes and directs movies, and I have known both for many years.  Both are friends who when it comes to giving criticism are honest, constructive, and ruthless, and so when they also weighed in on the story positively, I felt set to put it out somewhere, and excited to do so, except.....what the hell do you do with a 13,000 word story?

Broken River Books, who've done my last two books, publishes mainly short novels but not anything as short as "Summerfield's Film".  I thought about adding short stories to it to make a collection, but that would mean writing some new tales to have enough to go with the ones I already have and feel are worthy to publish, and I didn't want to spend months writing stories when I had a novel in progress. Finally, I spoke to a few people about the situation, conveying my frustration about having a story I liked just sitting there in my computer, and each person suggested the same thing. Why not just put the story up myself on Amazon as a solo work, an e-book, and let the chips fall where they may?  For some reason, not having gone this route before with any stories, I hadn't ever considered this option, but it made sense. Hire a pro to do a cover, put everything together myself, press a few buttons, and voila! The novelette that's not romantic or sentimental is out in the world.

So what the hell is "Summerfield's Film" about anyhow?  Here's what the Amazon description will say:

Now that he's a stay at home father in New York, taking care of the baby while his wife works, Tyler can't get out to the movies often. On one of his rare theater outings, something unexpected happens. He stumbles across the famous director K.M. Summerfield. Once prolific, now a recluse, the filmmaker vanished from public view years ago after he went blind.  No one knows where he's been living, and nobody knows what happened to the legendary film he supposedly made just before he lost his sight.  It's said he made a horror film, but nobody can be sure.

Thrilled about the encounter, Tyler hatches a plan.  If he can get his hands on that unseen film, if he can release it to the world, he'll be a hero to film fanatics everywhere. Still, something seems off to Tyler.  Is he playing Summerfield as he thinks, or is the once great director, for reasons of his own, playing him?

It's a story I had fun writing.  It draws upon the period of years I worked nights and had no other responsibilities and could go to movies in New York City every day of the week if I wanted.  There were several revival houses in the city (some still exist) and it's at these places, with their festivals and great programming, that you could see any film from any era from any part of the world - and on the big screen. A whole subculture of cinephiles exists in New York, people who devote the better part of their lives to going to all these revivals and art house showings around the city. These are people who apparently don't work at all, but just go to films.   As you might expect, most of these people are on the older side, retired probably, and I would always find it amusing to be at matinees with these fellow film nuts, and I would be the only one in the theater under the age of sixty. "Summerfield's Film" is a story about a guy who used to be part of this world of moviegoing addicts, but now he has settled down with his wife and their baby.  That is, until his accidental discovery of the whereabouts of the mysterious director Summerfield brings all his old film obsessiveness back. 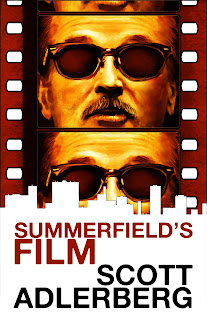 Anyway, I'm just glad I found a solution for what to do with a 13,000 word story. Thanks to everyone who offered their suggestions.  "Summerfield's Film" will be out on Amazon as an e-book later this week.

Scott, will there be a print version? I have your other books but I am not an e-reader guy. I'd buy it in a heartbeat if it came on paper.

Bound paper, with a proper binding so I can shelve it with your others. Just in case you wanted to sell me a Xerox.

To me, your situation may be where e-books have their greatest lasting impact. Authors need no longer cut or pad a story to get it to an "appropriate" length. Use exactly the number of words the story needs, and you're done .

There's a great and wonderful tradition of "long" stories such as yours. Most of Chandler's "short" stories ran as serials in Black Mask et al, and when assembled into a single block are much longer than the typical short story, but nothing close to a novel or even a novella.

Rick, I wasn't planning on doing a print version, but let me look into it. Otherwise, you sure you don't want a beautifully deluxe handcrafted Xerox edition?

Dana, totally agree. And I love those Chandler long short stories. They have a certain heft because of their length.

That is a beautiful cover? Dyer Wilk?

A little insight on doing a print version. For POD you can, but it won't have a spine title as it will be too narrow. You can find offset printers who can accommodate the spine, as I've seen novelettes in print before. Thinking about it, you might be able to get a spine if you went small like ADR prints their books at 4.2 x 6.8. Should create more pages which will give you a wider spine.

Look forward to it, regardless.

Ron - Thanks for the insight about POD!

And the cover, yes, Dyer. He does great stuff.

Your protagonist looks like Weddle's photo in he sidebar. Suck up.

The beautifully bound deluxe hand-crafted edition sounds expensive. But if you added some gold leaf to the cover, then *maybe* I can spring for it. But I'll take a POD print book even with a blank spine but I've got some pretty thin ones with spine texts ("High Adventure" magazine has sixty some leaves and is printed by CreateSpace with a spine every other month).

How nice is it to have readers beg for your work?