First, thanks to Holly for offering this coveted spot. I’m a daily reader of DSD and getting to post here is always a treat.

There are two types of series heroes: those who evolve and those who don’t. Readers seem to prefer those who don’t: Robert B. Parker’s Spenser and Mickey Spillane’s Mike Hammer jump to mind. The problem with them was the series went on so long the characters became virtual caricatures of themselves, kicking ass and taking names well into their 70s (and 80s for Hammer). This might not have been so jarring had Parker and Spillane left out references to their heroes’ history as time went on, but they seemed to relish in reminding us that Spenser saw action in the Korean War and Hammer served in the OSS. Kind of took me out of the stories after a while.

Not that evolving the hero is safe. Raymond Chandler left Philip Marlowe pretty much alone until he married him off in PLAYBACK which is, without question, the weakest Marlowe book. (Even POODLE SPRINGS is better, and Chandler didn’t write all that much of it. Parker didn’t do a bad job finishing it up, but it’s no competition to Chandler’s best). Dennis Lehane domesticated Patrick Kenzie and Angie Gennaro in MOONLIGHT MILE and it’s by far the outlier of that series. (I always had the feeling Lehane got tired of people bitching about wanting another Kenzie-Gennaro book and wrote  MOONLIGHT MILE to shut them up in more ways than one).

The two best examples I have of evolving the hero are current series still relatively young, but that show great promise. Adrian McKinty’s Troubles Trilogy is now five books long and displays no signs of slowing down. Sean Duffy moves through Northern Irish history as lone Catholic on the Protestant police force in an era where that wasn’t much safer than being a Jewish security guard at a Hezbollah convention. The books retain their vigor in large part because of the inevitable effects of the times on Duffy and those around him. John McFetridge is only two books into his Eddie Dougherty series (a third is on the way) but Eddie’s growth is apparent even in A LITTLE MORE FREE as he investigates cases and lives through a tumultuous period of Canadian history.

Stagnant protagonists are nice if I just want to read a series novel at random but reading through the series can get stale. No matter how creative the author gets with the plots, an aura of sameness permeates the book when you know the hero is going to remain essentially unaffected by all the horrible things that have happened to—and been done by—him. I like to see the characters move through time as real people would. That’s the point with fictional characters, right? To make them real.

That’s what I’ve tried to do with Nick Forte. He can’t quite bring himself to take prophylactic action to remove a threat to not just himself but his family in A SMALL SACRIFICE. In THE STUFF THAT DREAMS ARE MADE OF he tries to do what he thinks is the right thing and it backfires. THE MAN IN THE WINDOW shows a Forte who’s contracted what one hopes is not a terminal case of Don’t Give a Shit. In A DANGEROUS LESSON (due out May 15 at all finer Amazon outlets everywhere), he’s another step down the road that takes him to his guest appearance in GRIND JOINT, where he’s gone full circle from being the hero of his own series to the psycho sidekick in another.

(Note: Forte’s chronology is complicated. Four novels were completed before his guest appearance in GRIND JOINT. When GRIND JOINT found a publisher, I brought out A SMALL SACRIFICE myself because…well because there was no reason not to and some who had read drafts encouraged me.  A DANGEROUS LESSON clears out the Forte backlog, though a few weeks ago I completed a book that takes place after GRIND JOINT. Publishing queries are welcome.)

So would I say evolution of the main character is what keep a series fresh? Not so much. Forte ideas get harder to come by all the time. The next Penns River book (RESURRECTION MALL, due in early 2017 from Down and Out Books) started out as a Forte story. I couldn’t make it work and finally realized is wasn’t a good vehicle for him and belonged in Penns River. He evolves, but it’s difficult to change his circumstances too much and remain true to the series.

Penns River is a different. It’s a fictional depiction of a real place; ideas are coming faster than I can keep up with them. Rare is the week I don’t save something from the local paper to my hard drive that could be a plotline, or at least a scene. I like Detective Ben Dougherty (no relation to Eddie) as a series lead and cops and other characters will come and go, but it’s the town that drives the action. I can see that series running for quite a while.

Walking along a stream with Gustav Mahler, a young Bruno Walter lamented classical music had reached an end of innovation, “Look!” said Mahler, pointing. “There it goes. The last wave.”

Ideas for Forte will pop up from time to time, and I’ll be happy to work on them; I like the character and supporting cast. It’s The River I expect to flow for a long time. 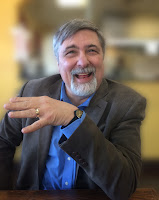 Dana King lives in Maryland with The Beloved Spouse. Last month he signed three deals with Down and Out books to re-issue and extend his Penns River series of novels. His first PI novel, A SMALL SACRIFICE, received a Shamus Award nomination in 2013. A short story, "Green Gables," appeared in the anthology BLOOD, GUTS, AND WHISKEY, edited by Todd Robinson. Other short fiction has appeared in Spinetingler, New Mystery Reader, A Twist of Noir, Mysterical-E, and Powder Burn Flash.

Dana’s blog, "One Bite at a Time," resides at danaking.blogspot.com. You may contact him there, or sending an e-mail to DanaKingCrime@gmail.com.
Posted by Holly West at 3:00 AM

Email ThisBlogThis!Share to TwitterShare to FacebookShare to Pinterest
Labels: a small sacrifice, Dana King, down & out books, evolving characters

Except for the Chili Palmer character and his appearance in two of his books, I loved the way Elmore Leonard did this with so many of his lesser characters (good guys and bad) ... as did Higgins with Dillon in Eddie Coyle and later in Cogan's Trade (when Dillon is dying from cancer and more a reference than an actual player). It was definitely something I had in mind when I started writing crime novels ... but taking care of their ages, etc., oy vey. I guess there's a way to be organized about this stuff, but I've been too lazy to do it. It comes to mind from time to time ... but then it's gone before I do the work. I'm contemplating one I started down in Tampa before the start of last NHL season with one of my bad guys, but I'm still not sure how old he'd be ... oy vey.

I can think of at least one example where a book that wasn't planned to be part of a series not only became a series but the recurring character wasn't even planned to be in the book.

Loren Estleman decided to write a book upon a character based of Jeremiah Johnson and his feud with a tribe of Indians. In the first chapter he wrote a short history of the character and then without even thinking about it he wrote: "That's where I came in."

The novel became the first of his Page Murdock series even though he had not planned on the character of Murdock being in it.

Dana, a couple of recent series I like where the author had the characters evolve very naturally are the Wallander books by Henning Mankell and the Inspector Wexford books by Ruth Rendell. In the Wallander series he gets older and starts to feel his mental powers weakening and he has ongoing relationships with his daughter and aging father that feel so real. Similiarly with Wexford who has a marriage that's solid but has the normal irritations of a long time marriage, and he sees his two daughters grow up and at least one gets married and I think divorced or at least separated. The last Wexford, he's actually retired and kind of moonlights on a case led by his long time second in command Mike Burden. Neither series, as you say happens with series characters set in stone, ever grows stale.

An author may spend a year and a half writing, editing, and promoting a novel that covers two weeks in a series' character's life. Why, then, should the character necessarily develop or evolve by the next book? How much have you I developed or evolved in the last two weeks? Give the character new stuff to do in each book, which is not the same as having that character evolve.

A Little More Free brings Eddie Dougherty more to the fore and integrates him as a character with the novel's historical setting to a greater extent than Black Rock did. But I'd say that means the author had evolved rather than the character.