It's easy to think of Prince as a musical icon but in the days since his death I've been struck by how much writers can learn from him.

About a devotion to art:

Prince was a man bursting with music — a wildly prolific songwriter, a virtuoso on guitars, keyboards and drums and a master architect of funk, rock, R&B and pop, even as his music defied genres. In a career that lasted from the late 1970s until his solo “Piano & a Microphone” tour this year, he was acclaimed as a sex symbol, a musical prodigy and an artist who shaped his career his way, often battling with accepted music-business practices.

About surrounding yourself with the right people:


"He would ask me 'Who is that? Who just walked in the room,'" recalled Kim Berry, Prince's hairstylist and friend for over 20 years. "He was watching at all times."
Prince Rogers Nelson was a man who couldn't afford not to be.

In an age where many celebrities don't want to do anything away from the public eye, Prince avoided the spotlight. Instead, he wanted it to shine on his art.

Prince was careful and built his inner circle almost as meticulously as he did his compositions.


About generosity and our attitude towards other writers:

Prince will happily talk about how much he adores Adele (“When she just comes on and sings with a piano player, no gimmicks, it’s great”) or Janelle Monáe, but he won’t criticise other artists. “The new pushes the old out of the way and retains what it wants to. Don’t ask me about popular acts. Ask Janelle. Doesn’t matter what I say. We ain’t raining on anyone’s parade. I ain’t mad at anybody. I don’t have any enemies.”

About fighting for his rights as an artist:

Having crafted a musical empire, taken on his industry to fight for the rights of artists and survived with a career artists half his age would have envied, Prince was careful and built his inner circle almost as meticulously as he did his compositions.

“When I first started out in the music industry, I was most concerned with freedom. Freedom to produce, freedom to play all the instruments on my records, freedom to say anything I wanted to,” he said when he was inducted into the Rock and Roll Hall of Fame in 2004.

He was a man who, despite his showmanship, shied away from fanfare.

About acknowledging his own talent:

He keeps playing down his own stardom... but does he ever think, perhaps midway through playing When Doves Cry to 30,000 people: “I’m really very good at this”?
“Well I don’t think it,” he smirks, raising an eyebrow. “I know it.”

a wildly prolific songwriter, a virtuoso on guitars, keyboards and drums and a master architect of funk, rock, R&B and pop, even as his music defied genres. 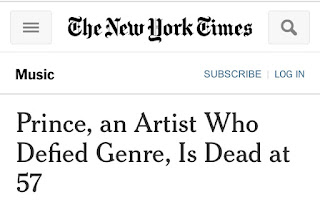