When I was an undergraduate in Louisiana, I read Thomas Pynchon because his books seemed cool and he seemed mysterious. (Years later, when we became good friends, I realized Tom was much weirder than anyone knew. (Yes. We're pals. If you don't believe me, just ask him.)) I enjoyed Gravity's Rainbow and V. quite a bit, especially the parts I didn't understand. I enjoyed Lot 49, which is sort of the Pynchon for people who never read Pynchon.

Later, in graduate school in Kansas, I read Vineland and some of Mason & Dixon. (I think Mason & Dixon was too clever for me.) While in Kansas, I checked out Slow Learner from the library, Pynchon's story collection, stories he'd written in the late 50s and early 60s. 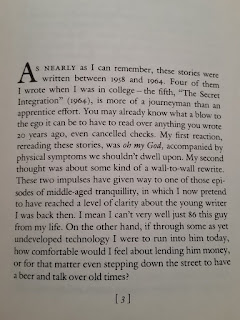 The amazing thing about the book was the introduction, in which Pynchon laid out in horrifying detail what went wrong with each of his stories, all of which were published (Kenyon Review, Saturday Evening Post, Epoch, etc). He writes that he got dialog wrong, characters wrong, motivation wrong. The intro reads as if some sock puppet is attacking him on Amazon. It's heart-breaking and glorious.

This book sticks with me for a couple reasons. One, when I went back to return the book after two weeks and ask whether I could renew it, I was told I hadn't checked it out at all. According to the records, the book was still on the shelf. I held the book in front of the librarian and explained to her that, well, no, the book was indeed checked out. She said that it was still on the shelf. I said that it was not. At the time, I was not as pleasant and charming as I am now, of course. My state of being has taken decades to perfect, as you'd expect. So, it is possible that we each became rather grumpy with each other. I absconded with the book, down the steps and to the sidewalk. I thought I was brave enough to live with stolen property, but I was not. I went back to the library and returned the book directly to the shelf. A few days later, when I went to check the book out again, it was gone. A different librarian said that they had no record of the book, that it did not exist in their card catalog. She was nicer than the other librarian, but no less unhelpful.

Last week I purchased a used copy of the book. (Tom doesn't need the money, believe me. He won a substantial amount a few years back betting on a town council election in Escondido.) I was reminded of Pynchon's writing lessons in the introduction, his explanations of where he went wrong. Many readers hated this book when it came out, calling it "self-indulgent" and worse. Fine.

What I appreciated in the book was that an accomplished author walks the reader through his earlier stories with hindsight. I am thankful for his hindsight and think that, as a writing book, Slow Learner is horribly under-rated.

If you can find it on the cheap, you might want to give it a shot, just for the introduction. Also, your library might have a copy. Or not.
Posted by Steve Weddle at 7:10 AM

Take it from a librarian. Every library has phantom books. Nobody knows why.

It's possible that a vast organization that goes by many names but that nobody can pin down as definitely existing was behind that off the shelf on the shelf library situation. Very mysterious.

I read just one of the stories from SLOW LEARNER in a separate anthology - "Entropy" was the story - but I remember that intro getting praised when the book came out and I read it through once in a bookstore. You're absolutely right. It's a great piece by Pynchon and full of sage writing advice.