Word on the Street - Interview with James Queally

Sometimes when you get to talking to someone with great insight and stories to tell, you lose track of time and forget you're going to have to transcribe the conversation in an interview format for the readers of Do Some Damage - and that's exactly what happened when I sat down with James Queally, a crime reporter for the L.A. Times, just days after his paper won a Pulitzer for their coverage of the San Bernardino shooting.

James shared some great stories and gave me a lot of his time, so rather than trying to butcher the wonderful thing we created, I've decided to split his interview into two entries. In this entry, we discuss the importance of crime reporting, the tensions during the Ferguson protests, and how small details tell more than one might imagine when reporting on crime.


You’ve been doing crime reporting for a while now, how many years?
I’ve been on and off for about seven years. I did breaking crime at night, so like, graveyard shift homicides all across New Jersey for about two years at the Star Ledger, then I started covering the Newark Police Department and statewide crime there.

When I came out here the first year, I was doing… working on this like digital breaking news desk so it was kind of a diversion. Then, for about the last year I’ve been kind of like a general assignment crime reporter for the Times, mostly crime around L.A. County, so that could be anything from an investigative project to getting sent to South L.A. because a body got found in a refrigerator.

That actually happened, I’m not that imaginative.

Wow! So, I mean what I want to know, from your perspective is (and it may seem obvious to you): Why do you think it’s important to have people like you out there covering crime as it’s happening?
It’s a variety of different things. It keeps an open dialogue, especially in the past two years with every officer use of force, pretty much, that happens in the U.S. under scrutiny. It allows the other side of any argument to come out. It’s the same as the importance of covering politics, of covering you know, court system. It gets human voices, it gets dissenting voices into a conversation that would otherwise be dominated by the press release or the sentencing transcript, or the court transcripts. I guess court’s a bad example ‘cause that is pretty open dialogue.

But you know, it’s let’s us be there, in the moment getting witnesses, doing as much of our own investigation as we can. A lot of what drove Ferguson, aside from social media was simply the “Hands up, don’t shoot” narrative kind of coming out of witness statements, coming out of Twitter, coming out of the St. Louis Post Dispatch’s early reporting down there. It kind of, depending on what side of that argument you’re on, you could say it’s for better or worse, but it kept it from just being the original police department narrative. And that’s kind of what I’ve always found, and it also just gives you more avenues to a more human story.

I’ve found plenty of good features, good other interesting characters to write about. Moreso when I was in Newark when I was really plugged into the city, just by going to homicide scenes. You know, you may go there and it might be what on it’s face looks like a typical murder. Your average police department press release is not terribly illuminating. It will generally be this is the age, the hometown, gender of the dead person or people. There are survivors, they are in this condition. They’ll generally say they don’t have a motive or suspect, or if they do release a motive it’s because it’s something basic or obvious like a domestic violence call or a known gang thing. And that’s usually it.

That’s all there is – and at the end of the day, somebody died. You know, there’s still a story to tell there. It’s not going to be every murder case, but you need to go down there. It’s probably your best crack at finding witnesses – obviously at finding witnesses, but also finding family members who will show up before everyone kind of just kind of scatters away. It’s a lost opportunity to not armchair cover.  When drowning in Newark, in nearly a hundred murders per year, there were days I would occasionally not run on the scene, but more often than not, I tried to get to every one I possibly could.

Do you feel that, in the time that you’ve been covering these kind of things that people seem to be more interested in the more human details than maybe they have been in the past – with things like the Freddie Gray incident in Baltimore and realizing that there are competing narratives?
Yeah, I mean, people have always been obsessed with crime and true crime narratives, but I definitely think everyone – you know, you have a facebook account – everyone is armchair quarterbacking the way police handle everything, especially use of force these days.

So I think it is more important than ever to have the other side of the argument – even if the police are right – it’s just like any conversation you need both sides. I do think there is more interest in it now, it’s also more important, I think, just to get factual information to have traction. Because you know “millenials are evil’, it’s my generation that’s doing this, but they kind of live and thrive off social media 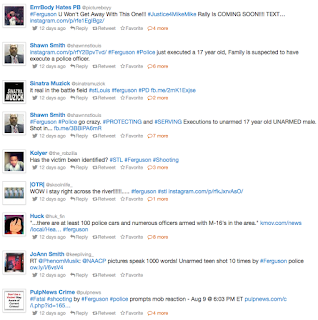 But you know, Ferguson was both a good and terrible example of this because while on the one side of things, Twitter definitely made that issue front and center – I really think that, more than Eric Garner, is what pushed us into the scrutiny and the climate we’re in now. But like I said, it brought all that attention the day of, and the week of when the shooting first happened. But also, when I was down there you could see people yelling and screaming things that were happening, that just weren’t. They would say the buildings were on fire that I was standing in front of, or that looters were in a certain building that they weren’t. You can just say anything. So I think now more than ever it’s important for those initial accounts to get out there and to get them from reporters on the ground, people you can trust. Get them online quicker.

If we’re not physically there in the moment and you’re waiting. It might sound like it’s a police sanitized narrative – but like I said before, the press releases are so limited that even while I was down there and I got to Ferguson – I landed about an hour after the grand jury decision, so things had already gotten bad. I could see the smoke coming up while I was landing at the airport in St. Louis. Anyway, there was a press conference about 2 am with the St. Louis County Police Chief, and he told you everything he could. But I mean, at the end of the day the official account of hundreds of people obliterating the main road through a city, he can’t cover everything that happened.

There was one thing I saw that got picked up by a few media accounts, but not a ton – there was a near catastrophe down there that I think I was one of the only reporters standing around for.
Things were insane. There was a gas station that had already been looted earlier in the night and – some of this is just illumantive to the tension, it’s not really a major story on it’s own – this caris just trying to get out of the street, from these rioters and peels off into the gas lot to get out of the way. And two officers arrived there, pull their rifles and advance on them. These were like sixteen year old kids, just trying to get the hell out of Dodge. That was like five seconds away from something absolutely mortifying happening. And in a vacuum, it’s chaos, no one is wrong to some extent. The officers are defending themselves, these people are trying to get the hell out of Dodge, but it’s just… you get examples like that, that really highlight the tension, almost more than any quote, anything a police officer is going to tell you, anything a city official is going to tell you. THAT image stayed with me and it was something I kept harkening back to writing about it later. You get those little pockets of action that you just might not see otherwise.

One of the worst murders I remember covering in Newark. There was some street dispute, I don’t remember exactly what lead to this. I think it was 2011. But a thirteen year old kid was murdered by this twenty-four year old. They were apparently fighting over the same woman. But when we got down to the scene it was less than an hour after it happened. A reporter who I was working with on it, found that the kid’s mother was outside, powerwashing the blood off the street. That’s kind of always been a hallmark of urban centers, the street Mylar balloons and candles, its always the one repeat image of homicides there, and she was cleaning the spot that was eventually going to turn into that. If that’s not indicative of the hellacious urban violence that happened in that city the whole time I was covering it, I don’t know what is. I just feel like finding those pieces can sometimes highlight what’s going on better than any comment.

And obviously, going back to what you said before, yeah what we’re talking about, especially increased scrutiny of police now – it’s not just getting the witnesses right there and not letting misinformation get traction, it’s also you wanna get to people before, you know like anything – like anybody, like a police officer would, too – you don’t want to talk to them after they’ve told their story three and four and five times and refined it. And they’ve talked to TV or have been coached, or they’ve been deposed by a lawyer. You don’t want to talk to somebody who was there three days later. You want to talk to them right there, right then, right now. So you’re gonna get the clean story.
You’ve just got to be there. It’s not a good way to do business otherwise

Look for part two where we discuss True Crime TV, OJ Simpson, and more. Read James's work at the LA Times here, and follow him on Twitter.
Posted by Renee Asher Pickup at 3:00 AM

This place is clean and has nice ambiance, more like modern than classic. Our visit was just amazing. I believe it was a treat to be at venues in Chicago. It would be a treat to attend another event here.