Back in the sixth issue of Needle: A Magazine of Noir, we had a swell story from Jeffery Hess.

In addition to writing short stories. Hess has himself edited a number of story collections, and his novel, Beachhead, hit the stands this week.


It’s 1980 on Florida’s Gulf coast. Sun, drugs, gambling debts, and dirty deals push Navy-prison parolee, Scotland Ross, deeper into the life of crime he never wanted. His sister’s life, a potential newfound love, and his own freedom are all on the line as he tangles with a redneck gangster intent on becoming the state’s next governor. Will Scotland make the right choice or the one that keeps him alive? Beachhead is dark noir set in the state of sunshine. A story of crime and loyalty, love and hate, and choices made when everything you care about is on the line.

Pinckney Benedict has compared the writing to that of John D. McDonald. Fred Leebron mentioned Elmore Leonard as a comparison. Ron Earl Phillips said, "Hess moors together a compelling story of land grabbing, political aspiration, government graft, and adulterous jealousy that will leave you reeling in its wake." And I said this about the novel: “Jeffery Hess’s BEACHHEAD sets a relentless pace with a brutal story of Scotland Ross, dealt a bad hand and determined to go all in. Whether the crimes are of passion, politics, or violence, every minute of this Florida thriller gleams with conflict and character.”

Beachhead is just the latest in a growing list of great books from the folks at Down & Out Books. I caught up with Hess for a little Q&A. It went something like this:

Do Some Damage: What makes Florida the best setting for this book? Why not Maine or Nebraska?

Jeffery Hess: My wife and I were sitting at a beachside bar on St. Pete Beach one spring day when the bartender told me I should be writing about the fishing ban that was happening in the Gulf waters right in front of us. He was pissed off about it and really animated. It seemed worth looking into. I didn’t know much about grouper fishing, but I’ve lived in Florida since I was four-years old. And Florida has a rich history in crime fiction from John D. MacDonald and Elmore Leonard, sure, but also Harry Crews and Jeff Lindsey. While the east coast gets so much attention, I was anxious to bring some of that fun to the west coast. 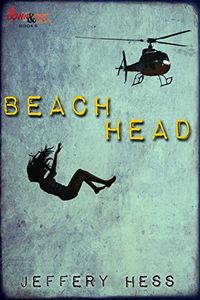 More to the point, I turned fifteen the year this book is set. Florida, especially back in 1980, was (and has always been) a place of extremes—a rich juxtaposition of nature and modernity; cabbage palm and pine scrub next to gleaming sub-divisions; beaches and swamps; lakes and limestone mines; bungalows in the shadows of high-rises; palm trees growing next to live oak trees. Then there’s second and third generations of Floridians who got integrated with all manner of transplants from other states, including senior citizens, young families, tourists, and what I’ve always known as transients, who came for the job boom in construction and the like. While those with the means “winter” or vacation down in the sunshine state, others don’t fare so well. That just makes it a natural choice for me. And these characters are Floridians in all those ways.

DSD: How important is it for you to have characters that readers care about or does that matter? Do you aim to make characters interesting? How do you go about building characters?

JH: Care about? Yes. Like? Not necessarily. I can’t say deliberately try to make characters interesting other than they’re already interesting to me. It’s character authenticity that I’m striving for, so in order to make that accurate, I either have to know something about them or go learn something about them. It’s tough for me to pull off stuff I’m not interested in. Of course I hope these characters appeal to readers in the same way. If I do my job correctly, the characters and their situations and their resulting actions will evoke at least a little empathy, which is the goal.
That said, the way I build characters varies from character to character and story to story. Sometimes they come fully formed, but mostly they come in increments, like at a dinner party, where the longer I’m around somebody, the more I pick up on certain actions, traits, attributes, and flaws. Characters, like people, generally act and react to present tension and stress based on experiences and lessons of their past. So, going forward oftentimes fills in the backstory, too.

DSD: Why this book? What is it about this story that is important to you?

JH: What’s important to me about this story is also a juxtaposition—one of loyalty to your loved ones and yourself, but also of distrust of authority, not in disobedience, but in challenging that authority. Crime stories are often about reactions to oppression of some sort. The more time I spent with my characters, the more invested I became in them.

DSD: As a reader and as a writer, do you differentiate a "happy" ending from a satisfying ending? Once you become invested in them, as you say, how difficult is to do really nasty things to them? How tough is it to give Scotland Ross a good beating?

JH: The “satisfying vs. happy” ending debate is similar to the “like vs. care” issue mentioned earlier. I don’t recall many happy endings in noir fiction, but many of them are satisfying in their absence of happiness. Look at Jim Thompson’s The Getaway, for an extreme, and often contentious, example. The ending of that book (which is immensely more satisfying than the endings of either film version) is not happy, but it’s so unexpected in its bleakness that it satisfies me. For a more conventional example, take Richard Stark’s, The Hunter. I wouldn’t call that a happy ending, but it was also satisfying.
As for my characters, there’s this perverse sense of obligation that my characters must endure the purest form of hell capable in their world, or as close to it that makes sense. It’s like following them around and seeing how they fuck up and how that can be made worse. That’s the beauty of noir, these characters can’t stay out of trouble.
As for putting Scotland through beatings, Beachhead opens with him getting a good beating and it only gets worse from there—despite a few short-lived upticks.

DSD: You point to stress and tension for your characters and experiences. Can you think of a point in any writing -- this book or other stories -- where you've realized that the scene needed more conflict? Do you go back through and "up" the stakes in the story? What is your editing process like?

JH: To me, Noir fiction is about people faced with situations they know they should get away from, but for some reason they are powerless to resist—they willingly go into the dangerous situation every time. They volunteer for their own doom through choice, coercion, or compulsion, but whichever it is for each particular character, he or she goes headlong into it and I just follow them.  As for needing more conflict, sometimes in revision, I’ll go back and see that an area needs to be ratcheted up, but more often what’s missing is a greater sense of what’s at stake. I try to be conscious of the “So what?” and “Who cares?” questions when I write, but especially in revision. Results vary.

The way I go about revision, these past few years, is scene-by-scene. I don’t like to move onto a new scene until the last one has been printed, read, marked up, and revised. It’s not the fastest way to write a first draft, I but I go through the whole draft (of novels, stories, even essays) this way. By the time I end, I have a relatively cohesive story and a fairly clean first draft. Then I go through. Scene-by-scene, again, each time looking at mechanical and craft issues and fixing, cutting, and stressing as necessary.

Get your own copy of Beachhead.
Posted by Steve Weddle at 8:09 AM