Alabama Worley, You're So Cool

I never got into romantic comedies. I can't suspend my disbelief, and half the time the woman "finding love" would be the bitch in a story told to you by your friends: "So then, she LEAVES HIM AT THE ALTAR and runs off with her high school boyfriend! Can you fucking believe that?"

But I do love a good love story.

Not many love stories are written with people like me in mind. Maybe my father over-romanticized Bonnie & Clyde when I was a kid, or maybe there is just something fundamentally wrong with the part of my brain that processes traditional love stories, but when I say "a good love story" I mean a story like True Romance.

There are a hundred different ways to approach explaining my love for this film, and how heavily it influenced what I consider "a good love story" and "a good crime movie" and "a good performance by Christopher Walken", but I want to focus on the real badass in this film: 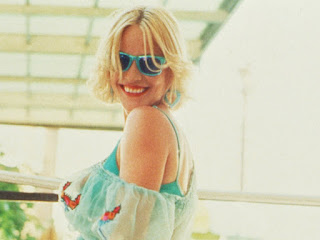 Look, Clarence is a sweet guy. Bama didn't choose poorly, even if marrying a guy on the first date is ABSOLUTELY INSANE. But the facts are the facts - without Bama, Clarence would have been dead three to five times in the course of the film. This movie could have been about a hooker with a heart of gold, but Tarantino and Tony Scott didn't take the easy way with any of the characters.

Arquette plays Alabama with a sweet sort of naivety that tricks the viewer into thinking she needs saving, but when push comes to shove - don't fuck with Bama. I don't know if Arquette going head to head with Gandolfini is the best fight scene I've ever seen - but I know that if you didn't fall in love with Alabama Worley the moment she starts laughing at him and flips him off you don't have a soul. 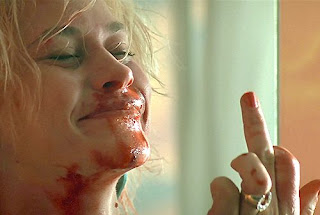 It's easy to forget that Alabama was already in a bad situation when she met Clarence. Whatever lead her to Drexl didn't take the childlike innocence out of her, but it definitely hardened her in ways we don't immediately see. She sees a pile of coke and her brand new husband and thinks "sure, let's do this!" You might even believe she just drifts into whatever life throws at her, hoping for the best, until you realize this woman actually laughed her way through a brutal beatdown and came out on top. Then, she doesn't run scared or go running to Clarence with second thoughts - she puts on her Elvis shades and gets down to business.

I have a real hard time with happy endings, I really do. The darker and ending, the better I like it. If this film had ended the way Tarantino originally wrote it, I wouldn't have minded one bit. But you can't help but be happy that Tony Scott changed it at the last minute (he really didn't decide to let Clarence live until midway through shooting the movie). I will go as far as to say, if it had ended with Alabama alone, driving away with the money, it would have been a killer movie, but it would have lost it's ranking as a "love story."

Regardless, Bama earned that ride into the sunset. She was hot on her feet and, as usual, took care of business.

Bullets are flying, Clarence is shot, no one is getting out alive. She doesn't run. She doesn't go somewhere to hide and cry. She gets the money, gets her man, and gets the hell out of Dodge. Nothing stops Alabama. Nothing throws her off her game.