A Tale of Two Trailers

Two movie trailers dropped this week, both for movies I’m really looking forward to paying money to see. One thrilled me with euphoria, the other, frankly, fell a little flat.

The first long trailer for Star Wars: The Force Awakens broke on Thursday. I saw it just after lunch. I was in my office/cube and had only access to my iPod and earbuds--which I blasted.  I’m not ashamed to say that I got goosebumps as soon as  the force theme played across that vast desert landscape. Then, when Luke Skywalker himself spoke, those bumps multiplied. The image of Vader’s burned mask was a surprise but, in retrospect, probably not. Then the images of all the new characters who I will meet in December. Then, after a fade to black, the voice millions of kids adored: Han Solo himself said, “Chewie, we’re home.” And Chewbacca warbled his response.

I was over the fourth moon of Yavin with happiness. And was that some sort of dust in my eyes? I won’t hide the fact that I got a little misty. Think about it: those were voices I hadn’t heard in 32 years. Thirty-two years since the last words spoken at the end of Return of the Jedi, when Leia told Han that Luke was her brother. (Odd when you think about all the remaining moments of the film and there were no words.) Thirty-two years since I had heard from some old friends who helped to shape my childhood and the childhoods of millions of kids over multiple generations.

Just take my money now. Some worry that the hype won’t live up to the expectation, that JJ Abrams can’t deliver on the dreams of millions. I think he will. Now, I’m fully aware that nostalgia plays a big role in this. Understood, but the look, the feel, the vibe of the trailer tells me that we are in good hands.


The other trailer was leaked footage on the internet. It was for Batman v Superman: Dawn of Justice, still a mouthful of a title. I don’t care that court cases don’t use the ‘s’ in vs.,’ they should have used an ‘s’. Anyway, I watched the footage as shot by a hand-held camera. And it was dark. Very dark. Both in tone and in visuals. A day later (Yesterday), the official version was released. The visuals were not as dark as the hand-held footage but the tone remained the same.

Lots of night shots, the better to hide the full look at Ben Affleck’s Batman. No vocals from Superman, which is a shame. I like Henry Cavill in the role. He can convey a lot with his face and those nuances go a long way to making his a good Superman. And, from what I saw, Affleck’s Batman looks really good. He’s even got the white eyes that we’ve seen for decades in the comics. And the robotic, modulated version of his voice was a nice addition. The Flash, on TV, modulates his voice and it’s a good effect, the better to avoid the Christian Bale growl.

By the end of the trailer, Batman and Superman meet, Supes hovering in the sky, Bats in armor on the ground. And they’re gonna fight. And they’re gonna be friends in the end so that they can form the Justice League. The question that entered my head was this: Can’t we just skip ahead to the friend part?

I get that BvS is going to be a reaction to the wide-scale destruction from Man of Steel. This is a post-9/11 world after all. I get that. I get that Bats will stand in for humankind and confront Superman. I get that. But that doesn’t mean I have to like it. I just hope that the battles between the two will be somewhere in the middle so we can get some smiles and sunshine in this movie. As I wrote on Jay’s Facebook page: “I love Batman and I can find good things in just about every property out there re: Bats. Now, yesterday, we had the Star Wars trailer and that sent me over the moon. Euphoria. This morning, I saw the leaked BvS footage. I clicked with high expectations. I was...I'm not sure. I'm not sure why it is that trailer almost did nothing for me. Yes, I like the themes (i.e., voiceovers) presented, and I liked Bats's metallic voice. But... after the bright excitement of Star Wars, all I'm seeing is dark, dark, dark. Yes, I will see it, without a doubt. I don't hate MoS. But what does it say about that movie and/or franchise when someone like me is almost indifferent? What it just poor timing? Will future trailers reveal more? Why the heck do heroes ALWAYS have to fight?”

Still, there was that moment, the moment when Superman and Batman were on screen, live action, for the very first time. That was indeed tres cool.

Another Facebook friend started a new thread saying “This is my Superman.” It started with a picture of Christopher Reeve and a Harlan Ellison quote. Here it is. 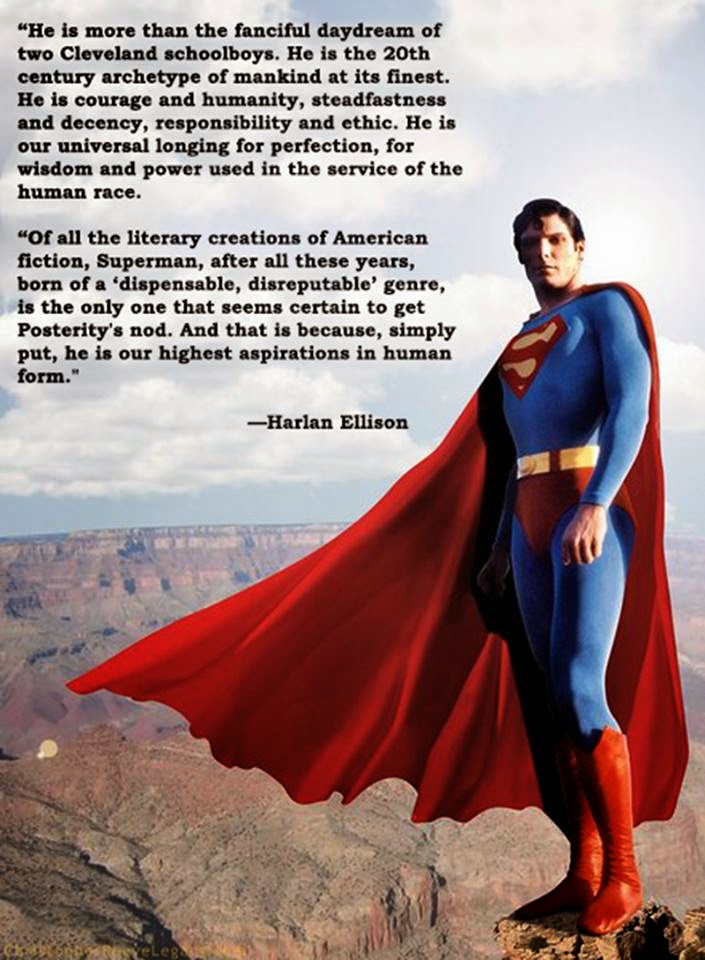 After that, I got to thinking: if Snyder is re-imagining Superman for the 21st Century--and the 1938 Superman/1950s TV Superman/1978 Movie Superman say one thing about him and us as a society in those respective years--what does MoS and BvS say about us now? Is this who we've become?
Posted by Scott D. Parker at 1:00 AM