Hilary Davidson has been a guest, a subject, or a topic at DoSomeDamage 836 times in the last five years. That’s not surprising, of course, as she has a hardback or paperback book dropping every three months.


Hilary’s debut novel, The Damage Done, won the 2011 Anthony Award for Best First Novel, and the Crimespree Award for Best First Novel. The book was also a finalist for a Macavity Award and an Arthur Ellis Award. The novel’s main character, Lily Moore, is, like Hilary, a travel writer. While their personal lives have little in common, they do share a few things, such as a love of vintage clothing, classic Hollywood movies, and Art Deco design. The second book in the series is The Next One to Fall (Tor/Forge, 2012) and the third is Evil in All Its Disguises (Tor/Forge, 2013). Read the reviews. Hilary’s first standalone novel, Blood Always Tells, was published by Tor/Forge in April 2014 and released as a trade paperback in March 2015.

On the occasion of the paperback publication of Blood Always Tells, Hilary took a break from racing across the airport to answer a few questions.

DSD: You've had hardbacks and ebooks and paperbacks and anthologies and magazines come out with your name in them. How is a paperback release different from the others? What makes it special? 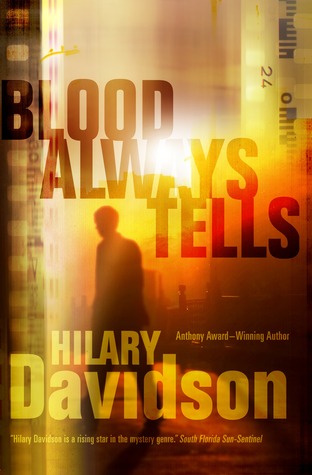 Hilary Davison: I get excited over any book release, but paperbacks are near and dear to my heart because that's what I grew up reading. Part of that was convenience — from the time I was 12, I had at least two hours a day of commuting time, and I spent it reading. The other part of the reason was financial: why buy a hardcover when I could buy two or three new paperbacks with the same amount of money? So when a book of mine comes out in paperback, I feel like it's reaching an entirely new audience. I'll buy paperbacks by authors I've never heard of, just because they sound interesting. Hardcovers, no. More than anything, I'm excited to get the book into more readers' hands.

DSD: You just did a Noir at the Bar recently. By my count, you've done 87 of these. Do you find them much different than when you read by yourself in a bookstore? How are these different?

HD: I love doing events with other writers. I know it's not the same as musicians jamming, but there's a similar collaborative spirit behind it. Everybody brings something to the table, and you never know what's going to happen, or how it will all turn out. It's different from doing solo bookstore events, because those don't change much from town. At a Noir at the Bar, I can read whatever I want because I'm not trying to sell anything!

DSD: We're coming up on crime fiction conventions and conferences from now until, heck, December, it seems. What kind of panel would you most like to see and what sort of authors would you want to see on it?

HD: I was just at Left Coast Crime, and I love that conference's mix of serious panels and fun ones. I was on one panel about violence in crime fiction, and another that was basically a game show. Both were great. One change I'd like to see is more genre-mixing on panels. By that, I mean don't put all the cozy writers on one panel and the hardboiled/noir ones on another. One of my favorite panels at LCC was the Cozy-Noir Summit that Katrina Niidas Holm moderated. Mixing it up is a great way for readers to discover new authors, and it makes for lively conversations. Also, I think audience members should be able to throw things at panelists who set their books in front of them. It's a panel, not an infomercial.

HD:  All I've learned from writing my books is that I can't outline. The upside is that the endings of my books are a surprise to me as much as anyone. That's also the downside. It's a tough way to write, stumbling blinding in the dark until I hit on something that makes sense. Honestly, it makes for a lot of false starts and wasted words. The one thing I hold onto is knowing the emotional arc of the story. I know what my main character is struggling with, and what demon s/he will face. That was definitely true of BLOOD ALWAYS TELLS. I knew the words Desmond Edgars was going to say in the last scene, even though I had no idea how I was going to get him there.

DSD: Do you feel as if you have become a better writer throughout the Lily Moore series and would you have done things differently in the early books?

HD: I think writing is one of those jobs where the more you do it, the better you get. I know there are exceptions to this, but it's generally true. What I struggle with is wanting to do new and different things with each book, so I feel like my learning curve is steep. The standalone I'm finishing now is largely narrated by a man who killed his wife. I've told plenty of short stories from a villain's point of few, but it's much tougher with a novel.
There's probably nothing I would change about the characters or the emotional arcs of my early books, even though I'd love to go back and clean up the writing. The ending of THE DAMAGE DONE will always break my heart. The first part of BLOOD ALWAYS TELLS has the same effect. There are legit reasons for certain characters to die, but that doesn't make me feel any better about killing them.

DSD: You recently won a Derringer Award for your short fiction. What’s it like to be a winner? (asking for a friend)

HD: Winning the Derringer meant so much — in no small part because writing short fiction is my true love. Novels break my brain and cause me no end of angst. They're satisfying when they're done, but until that moment, late in the game, they're actually kind of hellish. Stories are different. Writing short stories is more like a game of "What if?" I have the opening scenario in mind when I start writing, and then I follow it wherever it goes. The genesis for "A Hopeless Case," the story that won the Derringer, is awful: when I was in high school in Toronto, I walked down to a subway platform just as a woman jumped in front of an incoming train. But writing about a person in that scenario makes me process it differently. Instead of being horrified by what happened, I'm creeping under the person's skin, trying to understand them. Even when the subject matter is dark, it humanizes it.

Hilary Davidson's Blood Always Tells is a twisted tale of love, crime, and family gone wrong, by the multiple award-winning author of The Damage Done and Evil in All Its Disguises.