The Story Behind the Story and Reggie (FREAKING) Jackson

By Kristi Belcamino
When you are a writer, there is sometimes a story behind the story.
A while back when my writer’s group reviewed my second novel in the Gabriella Giovanni series, BLESSED ARE THE MEEK, they snickered about this passage:
It’s not the first time I’ve written about a naked car crash victim. The last naked guy I wrote about was drunk and masturbating when he caused a four-car wreck.
After listening to the comments from my fellow writers, it was my turn to talk and I shared the story behind the story:
When I was a cops reporter at the Monterey Herald newspaper, I was making my routine cop calls when the sergeant on duty told me he had a good one for me.
I couldn’t wait.
He told me a hilarious story — and gave me really great, sarcastic quotes — about a drunk guy driving down the road masturbating. The story got better as it went on: the drunk was buck naked. After the crash, he tried to fight off the medics, punching and kicking them. They had a tough time restraining him because his naked bod kept slipping out of their grasp. (Ew.)
It was a good story. Short and sweet. It didn’t get a whole lot of play in the paper and was buried on an inside page somewhere. But people found it. And loved it.
That weekend, my husband and I went to our favorite breakfast spot where I knew the owners from a previous newspaper story I’d written. When we got there, I saw they had taped my naked man story to the wall near the front counter and we had a laugh about it.
Later, I was digging into my eggs and sausages at a table on the patio when the owner appeared at my side. I looked up. Next to her was Hall-of-Famer Reggie (FREAKING) Jackson! 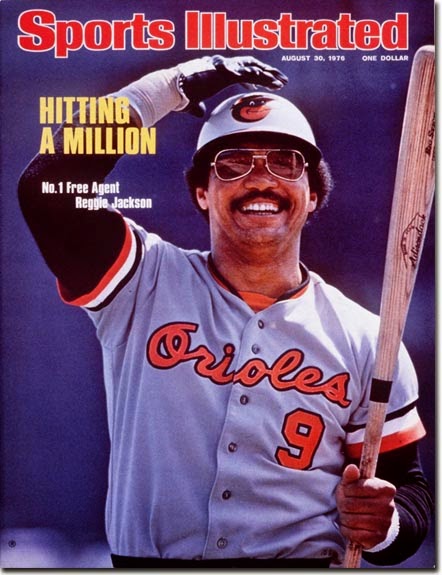 “Hey, Kristi,” the owner said. “Reggie wanted to meet you. He loved your story.”
I practically choked on my hash browns. Reggie (FREAKING) Jackson wanted to meet me? Reggie Jackson, football AND baseball player AND Hall of Famer wanted to meet lowly girl reporter.
Okay. That’s cool.
Reggie (hey, we’re technically on a first-name basis at this point) whipped out his wallet, gave me his card, and then unfolded a well-worn version of my newspaper story. He told me he’d been carrying it around for a week, showing all his friends.
So, there you go, the story behind the story, which is how writing about a naked drunk driver garnered me an introduction to Reggie (FREAKING) Jackson.
Do you have any good stories behind the story you can share?
Posted by Kristi at 3:00 AM

Ha! This is great. Reggie was my brother's favorite player back in the day, whirl I was partial to Tug McGraw.

Thanks, Holly!
I should note that my husband was not amused.