Earlier we dropped part one of a pretty lengthy-wise interview with Steve Weddle. Here's part two.

“Country Hardball is a searing portrait of an America most people would rather forget, where life is cheap, grudges never die, and dinner is always in the microwave. Steve Weddle’s poignant, powerful prose brings it to life in all of its desperate passion and hopeless aggression. Once I started reading, there was no way I could look away.”

—Hilary Davidson, author of Evil in All its Disguises

-Do you think ‘voice’ is something writers should be conscious of?
I think writers can be conscious of voice, and I think that's a problem. Writing a story and thinking about voice is like crossing a canyon on a tightrope and looking down. You can get too conscious of that, and it can be crippling. I'd try to read what I'd done the day before to proof along and also to get back into the voice, to remember whose story I was telling. If I thought too much about it, I had to stop. I'd get to where I was writing a parody of myself and it was no good.
-How did Indy know to close his eyes when they opened the Ark?
Indy who? Is this from a comic book?
-Well, thanks for asking me to talk at length about RAIDERS OF THE LOST ARK, and how its climax works because it serves the characters emotional arc rather than the plot, and how everything that is great in fiction is influenced by this film (even the things that were written before it came out.) But, honestly, we're here to talk about you. You mentioned people who need to have their stories told. Is that where you find yourself now, looking to tell the stories that aren't being told?
I think what I so often find myself concerned with is the emotional arc of my characters' lives, while the plot is the thing that gets them there. Like this movie I was watching the other day about some old man with a whip trying to get a box away from the Nazis. What was more important, it seemed to me, was how the characters were developing, how being faced with adversity forced them to search for this thing they'd lost, and the thing wasn't just a MacGuffin box.

In the stories I want to tell, the writer and reader get invested in the characters, in the world. If I'm going to do justice to the characters and make something worth the reader's time, I'm going to develop the storyline, of course, but I'm going to work to understand the characters, to see how their choices create them, how they impact the world around them. As a writer, it's up to me to thoroughly understand a character, to see both sides of the coin. If I can do that, then I can delve deeply, hopefully digging in the right place.
- You're with TYRUS BOOKS. It's a real sign of quality writing to see their logo on a book. How's it feel to have Country Hardball join that family?
It's pretty cool, isn't it? Many years ago, I started paying close attention to Bleak House Books, which was Ben LeRoy and Alison Janssen (now Dasho). They had all kinds of great authors and wonderful books and clever ideas. They had the Evidence Collection, which put in a rap sheet and fingerprints for the author. I have one of Neil Smith's books like that. And they had a signature collection. And a subscription plan, too.
So I got together what money I could and sent off for some collection they were offering. I think it was three books from the signature collection for $50. Something like that. I got a huge box of books back with a note (pictured) from Alison -- someone I didn't know at all at the time -- that said they'd run out of some of the books and she'd pulled copies from her shelf and had to substitute some hardbacks even though I'd only paid for paperbacks. I thought that was amazingly nice. You know, personal and thoughtful and all. I know now that it was perfect Alison. Fast-forward years and years and my agent is texting me from a conference where she's talking to Ben LeRoy about Country Hardball. Ben is doing Tyrus Books now and Alison has taken a job with Amazon at that point.

Though we'd talked to other people about publishing Country Hardball, we knew Tyrus was the perfect fit -- personal and thoughtful, just as Alison had shown years ago. I have all those Bleak House books, along with the subsequent Tyrus titles, on a shelf in my library. Inside one of the Nathan Singer books is the note from Alison. 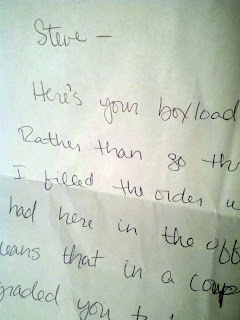 How does it feel? It feels like it's the way it was supposed to happen, you know? It feels perfect and great. It feels, I don't know, it just feels all of it. Every bit of awesome.
-Okay. So Country Hardball is out right stinking now. Why the hell should people buy the book?
I'm told the print version is in stores, too. I think people who like a good read should buy the book. I've worked hard in trying to tell the stories of these people, from the teenage boy just trying to understand the world to middle-aged people who understand it too well. I'm not saying this is the one book you should buy this year. The Shining Girls is a great read, for example. But if people think they might be interested in reading about the working class in rural America, about people who just need that one push to do bad things, about people who keep pushing back trying to not do those bad things, about the brutality we level against each other from credit card debt and workplace furloughs to attacks of cancer and assault, this is a book they should consider. Especially if they want to read about people trying to fight against the bullshit in this world.

-What are you working on next?

If you've gotten to the end of Country Hardball, then you know that Mabel Murphy is abducted by aliens during a Los Angeles Lakers game. I'm working on the backstory to those aliens and why they are forced to share umbrellas.

Oh, Country Hardball? Sorry. Yeah. Well, in that book, Roy Alison is looking for answers about what happened to his grandfather. I've had to go back to 1933 Arkansas to find out. The next book follows some of the characters from Country Hardball into the next year, but also flashes back to 1933 and 1955. It's a difficult, layered story, but the first one took me 42 years, so I figure I've got time.

What are you working on, Mr. Stringer?

-Lost City, the third book in the Eoin Miller Trilogy (three books...I'm told that's how a trilogy works) comes out in January, and I would be mighty grateful if people would read it. Buy it first, then read it. As for the next project? I'm cooking it now. It's set in Glasgow, a move away from my usual stomping ground, and it's something akin to an episode of The Rockford Files if made by the Coen Brothers.

I know i vanished from DSD without much of a word; I'd like to thank everyone who worked with me on the site over the years, and all the readers who came back to read my ramblings week after week. I'd also like to say that I haven't left completely, I just needed to focus on other things for awhile. I'm sure I'll be back to stink the place up at some point.