We've all read books we've hated. We've all wanted that time back. We've all thought about telling the author what we think about the book. We've all Googled county land records to find the author's address and driven to his or her house and sat in the driveway for a half-hour trying to decide what to say when the author answers the door. We've all had to ask our wives to call Tammy over at Ned's Bail Bonds.

But things are getting even weirder. As Kieran Shea pointed out that other day, you can get sued for posting a bad review online.


A judge in Virginia has ordered a woman to change her negative Yelp review about a building contractor after the business won a key legal battle. Jane Perez was slapped with a $750,000 lawsuit by Dietz Development after she publicly logged complaints about construction work the company performed on her home.

The story about the Fairfax woman was in the Washigton Post, Huff Po, the UK's Daily Mail, and a billion other places. 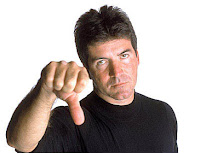 The big sticking point seems to be that her review suggested the contractor who worked on her home had stolen her jewelry. If you're going to accuse someone of a crime that the police say he didn't commit, you're going to have some trouble.

What's interesting about this incident is the stuff on the edges, I think. A judge orders a woman to change her online review. I totally get that in terms of defamation.

And back in September I mentioned this post which seems to fall under the "Authors Behaving Badly" category.

But what responsibility do reviewers have? Legal, sure. Ethical? Moral?

And what happens when courts begin ordering you to alter your post on a review site? Imagine:

A judge in Nebraska has ordered a man to change his negative Amazon review of Dan Brown's THE LOST SYMBOL after Brown's attorneys won a key legal battle. Nick LeBottoms was ordered to remove his criticism of Brown's third Robert Langdon novel after it was revealed that LeBottoms had  read only the first 17 pages.

I know what you're thinking. You're thinking, "Steve, that sounds crazy." Because, yeah, strange stuff never happens in publishing.

What happens when those authors one-starred by "rival" authors on Amazon file a class action suit against Amazon? Or when a TV-advertising, personal injury lawyer is able to prove your review was false and malicious? Or when you review a book and expose the author behind the pen name? What happens when your review is so well written, so clever and cutting, that it can be proven to have caused substantial mental and financial harm to the author?

Can you imagine being called into court to defend your negative review of The Vampyre's Lament?

Plaintiff's Attorney: You claim in your one-star review that this book was like "eating a turd sandwich." Is that correct?
You: Yeah. I guess I said that.
PA: And how often have you eaten a turd sandwich? Is this a taste with which you are familiar?
You: Uh, it was a joke.
PA: Are you joking now or were you joking then?
You: Uh...
PA: Is BigBallz69 even your real name?

As Norman Chad would say, "Pay the man, Shirley."

It would be nice to think there is a standard reviewers can be held to short of lawsuits. For example, if I hated a book enough I only read 17 pages, and felt compelled to say so (I generally only review books I like anymore), I'd say, "This book was so bad I stopped reading after 17 pages" and let those who read my review draw their own conclusions. Given the standards of the law, metaphor and simile could conceivably be outlawed in your scenario.

Any reference to Norman Chad is welcome.

If a book is shit it's immoral not to tell people.

The internet is a wonderful things and it has opened up the access people have to express opinions. With that freedom, people have responsibility and I'm not sure that curve has reached full circle.
It's like Pandora's box and there's going to be crap going on. I'm for keeping things open and the opinions free-flowing (even as a victim of crap reviews from people who've never reviewed a book before in their lives and have got to me by choosing mine to break their duck)and just accept the punches and kicks when they come (and they should if we're writing well). It's what Amazon does with the review system that will ultimately matter to writers and pubishers - if a one star review stops them passing around the book's name and links, then that's where the damage is done.