First of all, a quick plug. I've written before about Sparrow And Crowe; The Demoniac Of Los Angeles. It's a fresh and exciting comic that blends horror and noir. If you like the books by our other friends of DSD, Chuck Wendig and John Hornor Jacobs, then you'll like S&C. The reason for today's plug is a bit of a seasonal treat. The comic book is coming out on a bi-monhtly schedule, which meant not having a fresh issue for Halloween. So the guys behind the book have summoned up a collection of writing and art talent (I assume with candles and a pentagram drawn in blood on a hard-wood floor) and produced a digital-only anthology. Four stories, 47 pages, and for only 1.99 of your ill gotten gains.
If you already read comics digitally, then just add this to your account and sample some great talent. If you haven't tried digital comics yet, what's been stopping you?


**
I've been thinking about short things lately. Mostly short novels. When I talk to other novelista, mostly ones outside of crime but even with some within this genre, I always notice how much higher their word counts are than mine. 80, 90, 100k. Those are epic tomes to me.

In such times you can -and I do- point to the great writers who've written shorter books. Hammett. Cain. I'm not sure there is a better writer working today than Cormac McCarthy, and his award winning book The Road tops out at around the same length I've run up in my first two crime novels. There are some that have surprised me; I was going to include Orwell's 1984 in my list of short novels, but when I took a look at the page count I noticed it was a lot longer than I remember. It just didn't feel like it in the reading.

Therein lies the challenge, of course. The book needs to be as long or short as the story demands, and setting out to write a book with a specific word count is probably counter-productive to that end.

But I've also found many longer books that have been recommended to me have been put back down again within the first two chapters.The authors just put too many words on the page. It's never fair to name names, but there's a series of fantasy novels that it seems everyone has to read these days, and I tried the first book. I found straight away that I couldn't read it. As great as I'm sure the plot is, I don't need to have the clothes of each character detailed to me every time they enter a room. Nowhere on the huge venn diagram of writing -which balances out plot, character and exposition- do I see a space for the word clothes. 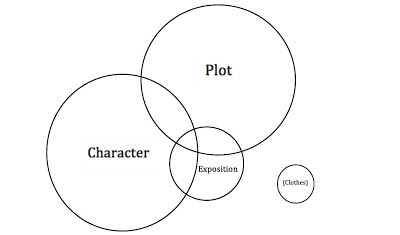 Part of my mistrust of long books comes from my own shortcomings. That's always an awareness worth having. It was a long enough journey for me to read novels at all. The longer ones just seemed like a step too far early on. And then, when I did read a long one, and stubbornly make my way through, I would find that I wasn't enjoying it. As an adult reader I don't let such things stop me, I'll seek out a good book no matter the length, but as a younger reader that was a huge roadblock.

And as a writer I can't imagine writing one that long. This isn't to say nobody else should either. Each person has their own story to tell and their own skill set for telling it. For me, I can't imagine having a story to tell with a beginning, middle and end, that justifies running longer than, say 80k. Unless I'm adding in extra bits, having a story with beginning, middle, middle, fake end, middle, end, epilogue. I like for my work to be as tight as I can get it, and that usually means a lot of shaving as I go along. I constantly hack away at what I've written, taking out anything that I don't think is needed.

I like to challenge myself, though. So for book 3 I decided to change my approach. I set out to write a longer novel. And at first I powered through. The first act came together very quickly and I sailed on into the middle of act 2. Then I started to struggle. It went against my process and my instincts. I need to be happy with what's gone before to be happy with where I'm at. I don't just write a chapter then move on to the next one, I write a chapter then rewrite it, then edit it, then hack it, then move on. It  takes me longer to write a short novel than it would a long one, it seems, because they both start off in the same place but one takes a lot more editing than the other.

So what I've found in book 3 is that operation; write long has been a failure, and now I'm going back to fix things that have been bugging me, things that wouldn't be bugging me if I'd followed my instincts in the first place.

I'm not saying none of you should write long. I'm not saying my brevity is a purer form of writing, or that those of us who cut to the quick are harder workers. All I'm saying is; those of you who can write long? I doff my cap to you. Yours is a skill that I don't have.
Posted by Jay Stringer at 4:41 AM

You had it pegged right at the start: a story should be as long as it needs to be. Everything I write falls into the 75,000 - 95,000 word range. I finished the outline of the next project last night, and it looks like it will fall in there, too.

I believe in 50 years people will look back and say one of the unanticipated benefits of e-books is the elimination of padding. When price points can be anywhere, books will only be as long as they need to be.