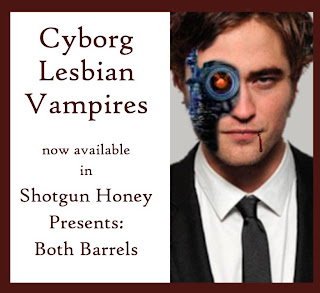 Friend of the blog and recent DSD Book Club pick Tom Piccirilli, as you may already know, is having some medical issues. Here's how you can help.

The good folks at SHOTGUN HONEY have come out with a great collection of stories, BOTH BARRELS, available in print and as an ebook. In addition to some really fantastic work, the anthology contains one of my Cyborg Lesbian Vampires stories.

In addition to that book, many others have recently dropped.

The paperback of The Professionals, by Owen Laukkanen

Our own Joelle Charbonneau's lovely Skating on the Edge 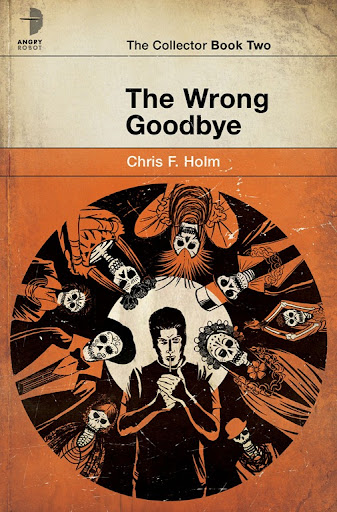 The charity anthology Off The Record -- At the Movies, which features talented authors and me 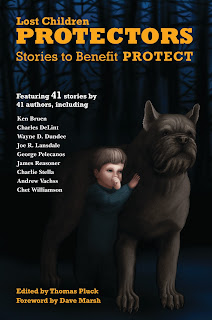 Another charity anthology with great talent and me, Protectors

And many, many other books I've idiotically neglected to mention. (Feel free to add in the comments.)

Also releasing last week was KARMA BACKLASH, a book published by Snubnose Press (Sandra Ruttan and Brian Lindenmuth) and written by my pal Chad Rohrbacher. Check it out. I think you'll dig it.

It’s amazing what a murdered friend can do to a directionless man, the passion and anger it can stoke, the sadness it fires into a body, the need for good old revenge it nurtures. Searching for his best friend's killer, Derby, a blue-collar gangster in a white-collar world, uncovers the beginning of a complicated mob war that threatens to bring down the whole city.

To find the answers he needs, Derby tries to stay focused: Find the killer. Clear his friend’s name. Stop a war. Don’t fall in love.

He traverses Toledo, a city that grows old with him, unearths secrets his boss doesn’t want exposed, and hopes to find that man he used to be before his mid-life crisis becomes the last crisis he ever experiences.


“Look, Derby, I’m telling you they’re like cats who wander into a kennel of Rots and have no damn idea that they’re about to get their heads ripped off even when the dogs are slobbering mad with fangs and muscles and whatnot.”
I don’t know where Reece picked up that word, whatnot, but he used it so often I was about crazy. I told him if he ever said it in my company again I’d bust his lip. Of course, he quickly figured out to say it only at times I couldn’t respond, like right now while eating my Swedish meatballs at my favorite restaurant. Reece was an ass that way.
“I tell you what,” Reece intoned in his nasally accent acquired from too many broken noses, “there is no way, I mean, I like those fellas just fine. Both of ‘em stand up guys as far as I’m concerned, but I tell you, they don’t have a cup of sense to sip on. Neither one of ‘em. You hearing me?” 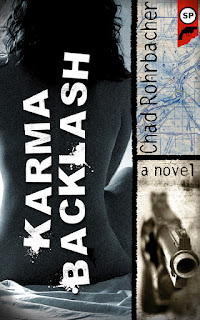 I heard him, but I was trying to enjoy my food and didn’t want to spoil it with talk about lawyers I didn’t even know.
Just about that moment I saw his right eye explode out of his head, spattering my meatballs with a tsunami of blood and gray matter. Reece’s mouth hung open, like a man in some soliloquy who suddenly forgot what he was going to say. (I learned that word, soliloquy, from Rosa who used it just to remind me what a messed up idea I had thinking I could ever be with a girl like her.) And I suppose Reece did forget what he was going to say since a bullet ripping through a person's skull-bone would generally have that affect.
Later I’d imagine the coroner opening him up, recreating the timeline:the shooter was ‘yeh’ tall,  the .44 bullet travelled at this angle ricocheting off his cranium just enough to save his friend’s life.
But I couldn’t imagine anything at that moment. I was too busy thinking, ‘what the hell?’
I sat there like a cat in front of a Rot watching everyone dive under tables, pulling their beautiful pasta dishes on top of their heads. I watched the bartender disappear behind the oak bar. I saw people scurrying into the back hall and I saw the boy holding the too big gun in his shaking hand.
He looked oddly familiar but I couldn’t place where. Sweat fell from his forehead. His brown eyes had a look that reminded me of something very serious, but everyone laughed anyway. His red flannel shirt hung loosely off his slight frame. He sported a thick brown beard, jeans, and the way he was shaking, I knew that was the first time he ever took a human life.
Transfixed, I watched the kid, the kid stared at me, and then he turned and took off.
Even though I owed him more than any man could owe another, I was pissed. Reece always left me in these kinds of situations. Now I’d have to talk to the cops and deal with their questions and glances. I’d have to hope it was McClain first on the scene and not that hard ass, Nevin.
I’d have to order some more damn meatballs and whatnot.