So I have a book out this week. But you already know that. You already bought it. Right? RIIIGHT? Good, we're cool. 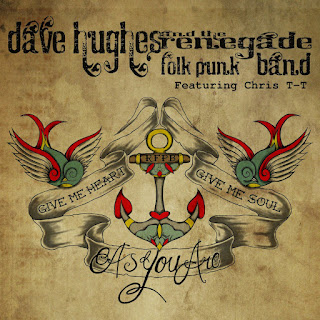 When my wife is in music journalist mode, she'll often ask me if I want to listen to whatever new act or album she's writing about. Sometimes I'll say yes, sometimes I'll shrug and pick my nose, sometimes I'll threaten to burn down the flat if she ever brings that band near me again. An act that I'll always say yes to hearing is Dave Hughes & The Renegade Folk Punk Band, and they have a new single coming out so you can all say yes to them too.


When I blurbed for someones ebook recently I paid them the best and simplest compliment I could think of, which was that he wrote the stories I wanted to read. For Dave Hughes & The RFPB, I could say they play the kind of music I want to hear.

Hughes writes and sings about real people and real things, and the Renegade Folk Punk Band fill out the sound with just enough of a raw edge to keep you guessing about where the song goes next. Steve Van Zandt once said of the E Street Band, "you can take the band out of the bar, but you can't take the bar out of the band," and whether you're listening to the RFPB on CD or watching them play a stage, you always get the same fun and free experience; they're always stood next you with their instruments wanting you to have a good time. There's always that feeling, like The Replacements just before Bobby Stinson did a guitar solo, or the Pogues just before Shane took another sip, of something about to cut loose and run.


Their new single, As You Are, is the most assured and professional recoding I've heard from them to date, but hasn't lost any of the raw fun that makes them tick. It features piano from another of our best acts, Chris T-T, and will be available from Itunes, Spotify and Bandcamp on 13/08/12. Keep an eye on Dave's website or follow him on twitter for more news on the album, In Death Do We Part?, which is going to get a lot of people excited.