The Fine Line Between Heeding Wisdom & Selling Out Creatively

You have a vision for your story. It's been building to a steady boil in your mind for years. You feel you know where you want this to go, and you work at it. A little here, a little there.

Gradually, the story takes shape on the page, and you feel you've done your job. It's the story you set out to tell.

And then you send it to your beta reader or editor or agent. And the response is not overwhelming praise for your brilliance.

No. Instead, the response is something more along the lines of, "Some potential here, but we need to find the story."

Proposals include massive scene cuts, a shift in focus to a different main character.

Do you: a) stand your ground and refuse to edit your story, or b) make the changes and feel like a sell-out?

The other night, watching America's Got Talent, I watched someone face this dilemma on TV, with music. The singer in question had wowed the judges and audience with her audition.

She made it through to Vegas, where she decided she would perform an original song.

The judges didn't think that was a good idea, and when she blew it, they gave her a second chance. To leave the stage, take a few hours and prepare a cover of a popular song they'd know. In the discussion between the judges, Howie said something about how this wasn't a writing competition.

I found myself wondering about that. Isn't it a TALENT competition? Isn't writing a talent? I mean, if all you can do is cover other people's material, you'll never actually be a star yourself.

That's one side of the coin. The other is that it would be unappealing to spend a season watching singer after singer perform original songs you didn't know. I mean, when I watch The Voice, I have to admit that I don't know all the songs being covered all the time. And thank God for Adam Levine, who actually admitted he didn't know all the songs being covered by contestants, either. He and I can at least agree that you can't solely base judging the contestants on comparing them to the original artists.

Howie was right for that point in the competition. The judges gave Dani a second chance, and Dani had to decide if she would stand her ground on her principles.

Or if she'd take the second chance.

She did. And the end result was that she made it through to Hollywood, while the other female singers in her category were both sent home.

Now, some might say that's unfair, and that she shouldn't have had a second chance, or that she had an unfair advantage over the other contestants. But I think a big part of what counted for her was her professionalism, and her willingness to take direction.

We artists have to know our place. Sometimes, it's appropriate for us to stand our ground.

And sometimes we have to find Option C) The ability to see your own story on another level and make changes to the work that meet your needs artistically as well as an editor or publisher's needs commercially. 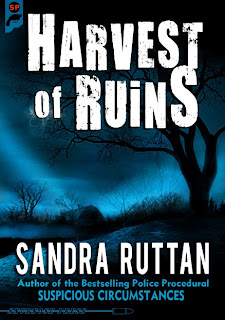 I went through this writing HARVEST OF RUINS. From the inception of the story, it centered on a young girl, and how things in her life that happened shaped her, and ultimately tore her apart.

As the story evolved through rewrites and revisions, and massive cuts in content and the introduction of new scenes, the book no longer centered on Vinny Shepherd. Instead, Hunter McKenna emerged as the central character.

And as more layers were stripped away, the book no longer centered on an investigation and the outcome. Instead, it put Hunter's future in the balance, with the detective sergeant facing criminal charges in court as her personal and professional lives are ripped apart one witness at a time.

The end result is a streamlined, 65,000 word story about a detective sergeant who's on trial for negligent homicide, whose partner takes a leap of faith as he tries to uncover the truth about the investigation they were conducting that led to tragedy, and whether the answers he finds will be enough to sway the jury.

Beneath the surface, HARVEST tells several other stories without losing the threads. It's about how parents shape their children, how susceptible teenagers are to the influence of their peers, how we all bear some responsibility for the choices we make and how those choices affect others, and where to draw the line between personal responsibility and criminal responsibility.

And ultimately, it's a story about forgiveness. Of others. And of ourselves.

Readers have a unique opportunity. Anyone who emails proof of purchase of HARVEST OF RUINS to snubnosepress at gmail dot com by September 1, 2011 will be sent a free copy of the prior version of the book, titled BELOW THE LIGHT, including an afterward by the author about how the book was ultimately revised, and why. You can block out your address and phone number from the purchase receipt. :) Your information will not be shared or disclosed with anyone. Copies of BELOW THE LIGHT will be available early August.

Purchase HARVEST OF RUINS from Amazon.com
Posted by Sandra Ruttan at 3:00 AM

Do you: a) stand your ground and refuse to edit your story, or b) make the changes and feel like a sell-out?

I believe I would happily sell-out if the money was actually on the table. But it never is, it's always just the hunch that one way will sell better than the other. And then, no matter how weird, obscure, against the mainstream something is there's almost always something like it that sells a ton.

It's a really personal choice. For me I realized a while ago I'm never going to sell more than a few hundred copies of a book so I might as well write the one I really want to.

The way I see it, though, it isn't always as simple as those two choices. My pride will kick up and say I'm selling out. But in this case, I sat down and thought it through and realized I could still cover the things I wanted to cover while making significant changes to the execution of the story.

When I was done, I really felt like I'd knocked it out of the park. Maybe that's just the response to actually putting that challenge before me and doing it, or maybe it was a gut reaction to the end product and how I felt about it, or some combination. But whatever the case, I feel like this was a great writing experience for me.

And I think you could sell a lot more, John. It's just finding that audience. :)

An agent once called me and told me to abandon what I was writing for more international (read "James Bond") adventures.

I signed with a different agent.

Well, probably every Canadian writer out there has been told to change their setting to the US. I stood my ground on that over the books that sold to Dorchester, and it's probably why they got a deal in Japan.