By Jay Stringer, pet detective.
As much as we would like to be open minded about all genres, each of us will have a few prejudices. Sometimes they make sense, sometimes they're based on nothing more than a whim. For my part, it takes a lot for me to read a police procedural. It takes something really special for me to enjoy the hell out one. 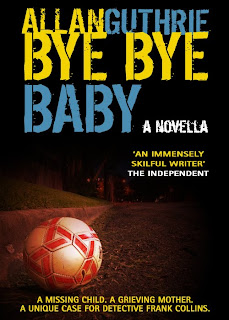 I don't really want to call Allan Guthrie's BYE, BYE, BABY a police procedural, I'd rather point out that it's a dark and funny thriller that has police in it. The approach is so fresh that it makes the whole thing feel like the first time I've read a police story, but all of the regular pieces are there; coppers, kidnapping, office politics, corruption and family secrets.
It also has a few other staples thrown in for good measure; a love triangle, a troubled marriage, an unpopular constable and a high ranking family member. But if that all sounds like a story you've read before, I dare you to find another writer that has taken each and every one of those elements in the direction Guthrie does here.
As with novels like HARD MAN and SAVAGE NIGHT, Guthrie seems well aware of the conclusions the reader is making, and knows just the right moment to turn each one on its head. There is a lot to be said for the art of letting the reader figure things out a couple of seconds before the characters, but the tartan ninja of crime fiction has developed another skill -he let's you think you've figured it out before laughing at you and running down a different corridor.
The story centres around DC Frank Collins. He's the but of a few jokes in CID, and has a sordid sexual past with one of his work colleagues. All of this has to be put to one side when a child is abducted from school, and Collins has to figure out not only where the child has gone, but also what dark secret the mother is hiding. That all seems fairly safe and standard, right? Don't get used to it, it won't last. Let me say; the first twist is a doozy, and it gets stranger from there.
This is an interesting change for Guthrie. So far we've been given events mostly from the point of view of the criminals or the outsiders, the psychopaths and sociopaths that inhabit his version of Edinburgh. The establishment had been relegated to the fringes of his work altogether or, in the case of SLAMMER, has been the machine that grinds people into the ground. Here the establishment is front and centre, but that doesn't mean things have been cleaned up at all. But here we do see a more controlled voice, a more logical and restrained progression of the story. It's also the least blood thirsty of his stories so far. The violence is hinted at and -in some ways I can't reveal- parodied. But of the blood is fake, the morality is still suitably fucked up. There are some very dark goings on, and the casual manipulation of a characters' grief and mental state is chilling if you stop to think about it.
There are still many of the same themes at play here as in previous stories. There is grief, madness, self delusion and greed. Characters are manipulated to near breaking point by their own pride and by forces out of their control. There is also one of the funniest lines of dialogue about a blindfold that you will ever read, because Al's trademark twisted humour is out in force. If this change in gears marks a new phase of Guthrie's writing career, I look forward to seeing what comes next. I would love to see this kind of fresh and interesting approach applied to a full length novel, and too see how many more ways he can twist a police thriller into a new shape.
Guthrie's previous novella, KILLING MUM was published through five leaves press, who also published GUN by Ray Banks and two novels from our very own Russel D McLean. BYE, BYE, BABY is set to be published by Barrington Stoke but you can catch it right now, this very second, by heading on over to smashwords and buying the ebook. You can read it on your kindles, your ipads or your iphones. An ipod will let you read it while you listen to music, and I'm pretty sure some toasters will be able to display it for you while cooking your breakfast. Point is, here is a cracking book by one of our best writers, all for $2.99.
Posted by Jay Stringer at 3:00 AM

Wow, an Al Guthrie story with the main character a cop - didn't see that coming.

As if I need to buy another book. As if I'd even need a reason not too being such a book whore. But this sounds good, and I haven't read anything by Allan yet.

I'll have to wait for the print edition. I don't have an eReader. (yet)

Hey Ron, you can go to Smashwords and read it on your computer - not a great way to read a book, but maybe okay for a novella.

Meant to buy this yesterday. Now I've done it. Thanks for the reminder.