review (sort of) by
John McFetridge


Go buy this book. I bought it on Amazon. 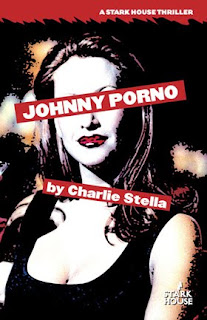 I don't need to write yet another glowing review, there are already dozens of them all over, from Publishers Weekly to Amazon customers. They all say basically the same thing, Charlie Stella is in Elmore Leonard and George V. Higgins territory, and that's true, so I don't need to say it again. Except he has his own voice, and it's great.

My favourite character might be Nan. Sure, she's a bitch, sleeping with her first ex-husband, planning to rob her second ex-husband and staying with her current husband long enough so she gets half his money in the divorce, but I like her. John Albano (Johnny Porno, though, of course, he hates the nickname) is also a great character, a working guy (who lost his union construction job for punching out a foreman) who needs money for child support and is on the edge of the mob, not wanting to get involved but not catching a break anywhere else. I believed this character completely.

And even though this is a great crime novel with terrific mobsters and cops my favourite scenes are the ones between the men and women. And there are plenty of those scenes. They're all daggers to the heart, of course, but so sharp and so real I can't help but smile a little as I feel the pain (thankful tat it's not me but knowing those moments well).

So, on the one hand it's about big social and political ideas; how organized crime benefits from a prohibition, how pornography started to become mainstream, how divorce affects children, what family really means and so on, but it's also a street-smart story of working people trying to make it day by day.

I've said here a few times that I like what's happening with the small presses these days and this book is a perfect example.

Okay, go buy the book, read it, come back and we'll talk about our favourite parts and our favourite characters. That scene with Johnny and Melinda, their first "date" in the diner where her friend is working - that is just a fantastic scene isn't it? I mean I read it and then right away I read it again.
Posted by John McFetridge at 12:11 AM

Nice. I like recommends and crime set in the 70s.

Character drama as well - have you seen the Vincent Cassell film MESRINE: KILLER INSTINCT, yet?

Was alotta fun using Parker in a bookstore heist.

The two of you are speaking the same language with different accents.

And may soon be sharing the same football team ... madonna mia.

Thanks for the kind words one and all.