How Many Hammers Are Enough?

I’ve come a long way, though, because I didn’t say that out loud. But it did make me realize that either we think the idea of a central theme is too obvious to discuss, or it’s something only writers worry about.

Most of us have felt a little imposter syndrome and can relate. Most of us have probably felt at some point that we aren't really the person some peope think we are (I'm not a loser, no matter what my mother-in-law thinks).

Mad Men tkes that to an extreme. Don Draper has a secret past. The image he presents to the world isn’t really him – the advertising industry is the prefect place to investigate that as it presents an image of products to the world. Every character in the show deals with this kind of self-doubt and the feeling that they have to present an image to the world that they may not feel is really them. In one episode a guy who has a breakdown and leaves the company says, “If I don’t go into that office tomorrow, who am I?” In fact, there’s a line like that in pretty much every episode – I just watched, “The Gypsy and the Hobo” from season three and it ends with Don and Betty taking the kids out trick or treating on Halloween and ends with a man at his door saying, “A gypsy and a hobo,” and then looking at Don and Betty and saying, “And who are you supposed to be?”

Season three ended with Don and Betty getting divorced and Don starting a new agency – out on his own, not knowing who he is, again. Creating himself all over, again.

The premiere for season four opened with the line, ”Who is Don Draper?” And then the episode turned on the fact he didn’t give the answer the reporter wanted, or could work with. Every episode we find out a little more about the characters, and they find out more about themselves.

And then the real fun starts – what are they going to do with that new information? Will they try and bury it deep within themselves? That’ll make for even more fun when it inevitably explodes to the surface later. Or, will it explode into something right now?

This is why I like Mad Men, it’s a “big idea” show that doesn’t let its big idea get in the way. And least not for me. Some people have said it’s too, “On the nose,” that it’s hitting us over the head with a hammer, with a bag of hammers.

And that’s the tough question for me when I write, how many hammers are enough?

It makes me wonder if I’ve worked hard enough to get these kinds of things into my own writing – the big ideas to make it worthwhile to read but not so much that it gets in the way.

Sometimes I feel if I'm working with these kinds of big ideas and I just get into ‘the zone,’ then a lot of it will be instinct and connections will be made (Matthew Weiner claims he writes Mad Men by instinct). Or maybe that’s what happens when I get obsessed with something. Or maybe I just see connections where there aren’t really any (is that the definition of insanity? Well, writer, insane person, it’s a fine line).

But I do think it’s important to start with a big idea, with “something to say,” I guess. Even something simple, something that’s been said a lot before. The Imposter Syndrome has been talked about for a long time, there have been movies and TV shows and books with characters who have secret pasts and show how coping with that manifests itself in all kinds of ways (you could probably also make a claim that Tony Soprano, in the last show Matthew Weiner wrote for, suffered from a form of the imposter syndrome, feeling that he was born into a lifestyle that wasn’t the right one for him but he lived it anyway).

Of course, sometimes a cigar is just a cigar, right? And sometimes writing is a lot simpler than that.

Which brings me to my own writing.

A couple years ago our own Bryon Quertermous edited Demolition Magazine online and he was nice enough to publish one of my short stories, Grow House. Now, Smashwords has made it so easy even I could figure out how to give it away as an e-book. Just click here and choose your format. 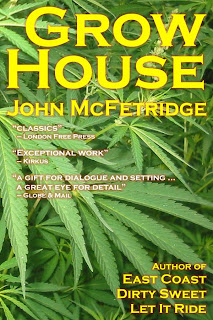 The “big idea” in Grow House (such that it is) is stated on the first page:

Steve Barrett had been back from Afghanistan two weeks when he got back to stealing cars, this one a brand new BMW X5, leather interior, V8. What he did was, he stood around the parking lot of the Vaughn Mills Mall in north Toronto until some woman pulled in driving it and he followed her inside. Then he gave a couple of teenagers fifty bucks to steal her purse and while she was giving the mall security guard shit for half an hour, Steve drove the car to a garage on Dufferin owned by a biker named Danny Mac who gave him ten grand cash.

It was the same kind of independent thinking the army sent him home for showing. What the fuck did they expect him to do in Canada?

So, it’s about “independent thinking.” All the characers have some plan or scheme that doesn’t go well.

Not exactly a big idea like the imposter syndrome, but I hope you like it anyway.
Posted by John McFetridge at 12:45 AM

Rarely are engaging stories what they appear at first blush. Advertising may seem like glamorous job, but like any multi-cog system the gears are pretty mundane. From copy editors to paste up to runners you have multitude of parts working together, none of them sexy on their own. Working together, the production, the interaction, that's the sexy, that's the story. The story is always people.

The setting is not the story.

I need to get caught up on MAD MEN, it's been a while. I didn't catch last season. Maybe I'll do that this weekend.

Thanks for the short.

Hey cool post. I'm guessing you were pitching to the fuckheads in T.O.?

I feel for ya.

I think that's prolly what Mr. Weiner does to, re: writing on instinct. He just listens to what Don Draper is whinging about, then follows that - populating Don's world with supporting characters that also struggle with the same theme as him: who am I?

Again, good post. I hope you think of me when ur setting up ur writers room.

Ron, when you get caught up on Mad Men, I'd like to know what you think about Rubicon.

I'd love to set up a writers' room someday. If it ever happens I'd like to talk to you.

Do you follow Jim Henshaw's blog The Legion of Decency?

He's always trying to get better productions out of Canadian TV.

Oops. That's me up there Hold Me Matt. I changed my handle.

Yeah, I follow Jim's blog - he's had some of the most honest things to say about The Bridge of any that I've read.

And the truth hurts ;) But it needs to be said.