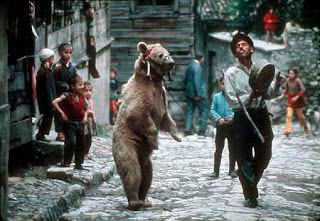 (This is my second and last post for DSD. Just wanted to add that it's been a blast, and I may be looking for ways to incapacitate Stringer for longer next time. I also wanted to say how proud I am of myself for writing a whole post about Harrogate and not mentioning Russel's fancy man. Aw, hell.)
Spent last Saturday down in Harrogate for the (deep breath) Theakstons Old Peculier Crime Writing Festival 2010. It was originally supposed to be a fleeting visit - basically the panel and then offski - but we ended up staying a little longer thanks to some fine company and another panel that caught my attention. Otherwise, I have to admit, I have something of a love/hate relationship with events. See, like the vast majority of other people what have written books an’ that, I have a day job and, like a vast majority of people what have day jobs an’ that, relish the idea of spending my free time as I wish. Now “as I wish” normally means “spending time with my wife”. It can also mean “getting some writing done”.
What it very rarely means is “being a writer”.
For me, “being a writer” is the least comfortable part of this whole business, because the simple fact of the matter is I don’t really consider myself that way - not in an arena any wider than our spare bedroom, anyway. I don’t make my living from writing, I don’t hang out with creative types that often, and nobody at my day job knows about this secondary “career”. It’s an existence that’s worked out pretty well so far, except for those occasions that demand a public appearance. Then I spend most of my time waiting for the tap on the shoulder and a request that I not make a scene as I’m escorted from the premises. I suppose this is some throwback to my early events, typified by empty rooms and piles of books that need to be signed so they can’t be sent back to the publisher. Little old ladies who come for the free wine and stay for the moral superiority. Stock signings that require identification before they’ll believe you are who you say you are. Convention signings without books. Convention signings with books that nobody wants. Holes in convention conversation where people look around for someone who’ll benefit their career more than you, the general awkwardness of being at a school reunion and getting stuck with the lad who used to eat stuff for money. And then the horrible realisation that the lad pities you.
I could go on, but you get the picture. The idea of travelling across the country only to feel like shit gets old really quickly, especially when you’re doing it on your own time. It’s taken me five books and a word from my missus to call it a day and ditch this ridiculous obligation to show up for everything I’m invited to. I dare say I’ve missed out some sterling opportunities to sell books, but then one of the few benefits of having a day job is that bills still get paid regardless of how much I sell. And while it doesn’t change some of the minor irritations about even the best events - and I’d definitely call Harrogate one of the best - it certainly puts those irritations in perspective and makes the whole experience a lot more enjoyable.
So there we see it, under Ray’s Advice For New Writers (Abridged), the same refrain: Do What You’re Comfortable With. Because for all the marketing gurus telling me I should be out there with the sell-sell-sell and network-network-network, I reckon the key factor in any event should be enjoyability, otherwise you’re (most likely) paying for the privilege of wasting your spare time in misery in front of a crowd of people who’ve never heard of you and, because of your lacklustre performance, probably won’t do much to change that fact. So no more readings - quite apart from the fact that I don’t like watching authors read from their books, the turnout for one of my solo shows would be embarrassing. No more stock signing unless it’s an in-and-out - sitting at a table in the middle of a bookshop getting stared at is even more embarrassing.
And much more time to write, which is infinitely preferable to being a writer.
Posted by Ray Banks at 3:00 AM

I hear you, Ray. But I'm glad you came - our panel was way better for it. You're a natural up there. You were born to panel.

Oh, I'm glad I went too. Absolutely. I'd forgotten how much fun a good panel can be.

Let's be clear about this. I made eleven dollars and seventy-five cents in one afternoon by eating stuff. No, it's not Janet Evanovich money, but it's still pretty good for a writer. And after the extra roll of toilet paper and having to rent a plunger from that guy at the breakfast diner across the street, I very nearly earned out.
Oh, and thanks for stopping by and filling in for Stringer.
Just, um, you know, leave the key when you leave.

Damn, you just got here. Missing you already.

I still say my favorite part of B'Con Chicago was sitting in a bar at happy hour with Ray banks and his wife for 3 hours just shooting the shit.

Banks, as long as you attend the next event I'm at, we're good!

Great couple of weeks. Damn, now I have to raise my game when I get back. If NYC doesn't melt me into a puddle.