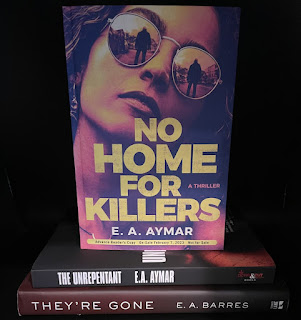 NO HOME FOR KILLERS
NO HOME FOR KILLERS
E. A. Aymar
Available February 1
“Blends Shakespearian tragedy with street savvy for an engrossing and entertaining novel like none other you’ll read…a benchmark in noir fiction.”
– James Grady, legendary creator of Condor and author of This Train

E. A. Aymar releases another thriller, NO HOME FOR KILLERS, and once again proves he has talent and heart. He has the remarkable ability to craft fast paced, intense reads highlighting his pitch-perfect dialog and complicated, compelling characters. As well, his storytelling does not turn away from the ugly and the profane, indeed Aymar handles dark subject matter with sensitivity and sincerity. His use of such subjects is purposeful, often underlining Aymar’s bigger picture, the story of violence and the control it has on so many lives. Ed has a lot to say.

NO HOME FOR KILLERS introduces us to the Peña family. Markus Peña, jazz musician, social activist and brother to Melinda and Emily, is found murdered in the early part of our story. Former social worker Melinda, traumatized after years of trying to save the fragile and weak, and Emily, a justice seeking undercover vigilante, come together to find out who committed this crime. As his sisters work to discover who killed him and why, they uncover many ugly truths about their brother and revisit dark family secrets and pain all while trying to outwit and outrun brutal criminals.

Previously Aymar delivered the smart and kick-ass female led THEY’RE GONE, a book acclaimed by Publishers Weekly, Kirkus and named one of the best books of 2020 collections by the South Florida Sentinel. 2019 saw THE UNREPENTANT, the tale of desperate eighteen-year-old Charlotte as she runs from an abusive home only to end up kidnapped and forced into an even darker life, set atop the finalist list for several awards including Foreward Indies, Readers Favorites, Next Gin Indie and the Anthony. THE UNREPENTANT also graced the Amazon bestseller list. And his Dead Series, I’LL SLEEP WHEN YOU’RE DEAD AND YOU’RE AS GOOD AS DEAD, amassed rave reviews from crime and thriller readers.

Ed doesn’t just write, he continues to sharpen his craft and finds the time to help new writers, as well. His column, “Decisions and Revisions,” appears monthly in the Washington Independent Review of Books. He is a former member of the national board of the International Thriller Writers and, for years, was the managing editor of The Thrill Begins, an online resource for debut and aspiring writers. He is also an active member of Crime Writers of Color, the Mystery Writers of America and Sisters in Crime. Plus, he runs the Noir at the Bar series for Washington, D.C., and has hosted and spoken at a variety of crime fiction, writing, and publishing events nationwide. He manages the popular and well-regarded monthly newsletter called Crime (Fiction) Works featuring upcoming top crime fiction novels, interviews, and monthly prizes for subscribers. Click HERE to sign up!

Ed loves writing. It’s clear. And with the passion and talent he puts into every project you know you're going to be THRILLED. 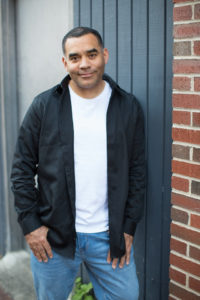 Posted by Marietta Miles at 9:57 AM