Fright Night: Origins by Tom Holland and A Jack Ulrich 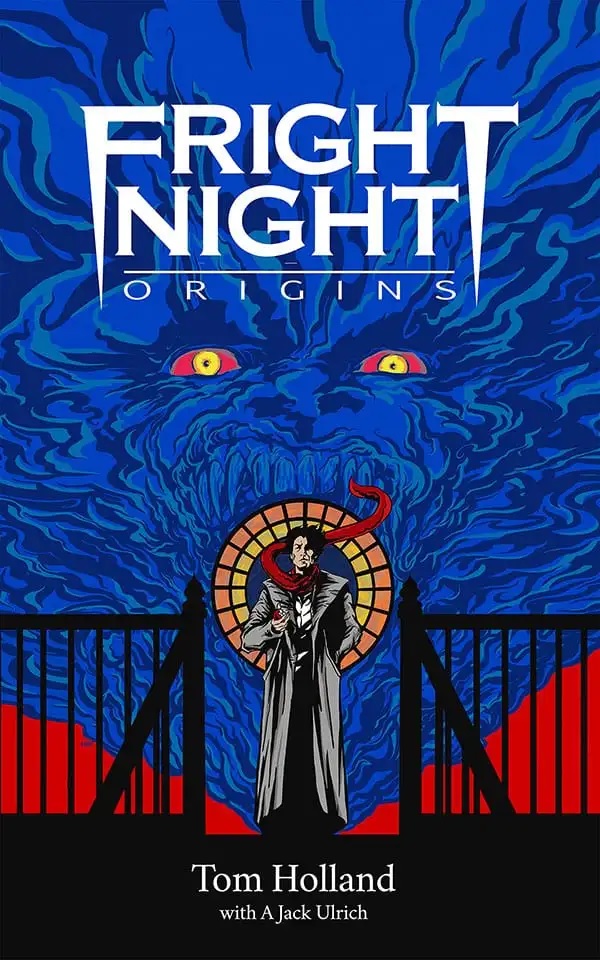 The classic 80's movie gets a makeover once again, this time in a novel co-written by the original film's writer/director Tom Holland.

If you're at the very low end of Gen X or the high end of Millennial, there's a chance you loved the movie Fright Night. Because there's a good chance you saw it, and to see it was to love it. There's less chance you've seen all the other movies. Fright Night Part Two is unfairly maligned. In my view it's a classic 80's vampire movie. The oddball crew of villains, the subverting of the male hero-saves-the-seduced-girlfriend trope, and some fantastic horror visuals. Seriously, the rollerblading vampire coming out of the mist? Nightmare fuel if you were young when you first saw it. I'm also a huge fan of the remake. They made some very smart choices and went in different directions to the original, and I believe if it was called anything other than Fright Night it would be hailed as a great vampire movie. And then there's also the sequel/remake of the remake...in which all of the same things happen to people of the same names, but in a different country with a gender-flipped villain. And it's also a fairly solid flick, up until the end.

All of that is to say...when I heard Tom Holland was getting the rights back and planning to turn it into a trilogy of books, I was interested.

And then...I read the book.

Spoiler straight here: This is not going to be a good review. As a rule I wouldn't do this. I'm a writer, and I don't like shitting on writers. But also I figure Tom Holland is a big enough name that he can take a bad review, and the issues here might help indie authors or people just starting out on their journey.

So, first, what works?

The novel is a fairly faithful re-tread of the original movie. So if you like the movie, the story here is going to be something you already buy in to. We get some interesting expansion on the world and the characters. A view inside their heads, and more backstory for Jerry Dandridge and Billy Cole. We also get a subplot of police investigating the murders which is a thread never picked up on in any of the movies. And we also get a setup for the rest of the trilogy, seeing ways in which this story can expand to a larger mythology. All good, right?

Firstly a word on Jerry's backstory. Neither the original movie nor the remake really gave us anything. And yet both managed to provide hints that felt like something. In the first film Chris Sarandon's Big Bad kept munching on apples and you got a sense either that he was from a species related to fruit bats or -if you really wanted to do some headcanon- a biblical feel. In the remake they made the smart choice of giving us one line of backstory, explaining that Jerry was from a species that originated in the Mediterranean and likes to burrow into the ground. We were left to let our imaginations do the rest. In the novel we are given everything. Jerry's real name. His country of origin. We see the moment he became a vampire. And the most disappointing thing about it is how...familiar...it all feels. Essentially if you've seen Bram Stoker's Dracula, or read any vampire stories in the past thirty years, you already know exactly how this origin story goes. Simply swap out Vlad the Impaler for....an enemy of Vlad the Impaler. In a franchise that has such a fun history of subverting tropes and giving fresh ideas, this choice just feels uninspired.

But one excess trope in a book isn't enough to give it a bad review.

It's on the technical level that Fright Night: Origins really starts to annoy.

Firstly it's double-spaced after a full stop. Okay, not the end of the world. Not anything like industry standard for many years now...but not a buzz killer by itself. The novel reads very much like someone copied a screenplay into a word document, did a first draft at expanding with extra prose, and then pressed publish without running it past an editor. We jump from head to head within paragraphs. We are given a backstory on characters the moment they are introduced but then given exactly the same backstory either a page later or the very next time we see the character.

Spelling and grammar mistakes happen. I'm dyslexic, I will always forgive those. And hell, I've self-published a few books in which readers have sent me spelling corrections. In the modern publishing ecosystem of ebooks, cheap prices, and updateable files, these things have become more acceptable.

But when you're charging the prices currently listed for Fright Night: Origins you owe your readers at LEAST one pass through an editor and at bare minimum an understanding of the basic mechanics of prose.