This week, Beau goes through some things. 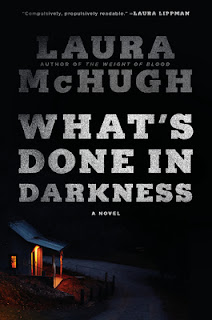 Seventeen-year-old Sarabeth has become increasingly rebellious since her parents found God and moved their family to a remote Arkansas farmstead where she's forced to wear long dresses, follow strict rules, and grow her hair down to her waist. She's all but given up on escaping the farm when a masked man appears one stifling summer morning and snatches her out of the cornfield.
A week after her abduction, she's found alongside a highway in a bloodstained dress--alive--but her family treats her like she's tainted, and there's little hope of finding her captor, who kept Sarabeth blindfolded in the dark the entire time, never uttering a word. One good thing arises from the horrific ordeal: a chance to leave the Ozarks and start a new life.
Five years later, Sarabeth is struggling to keep her past buried when investigator Nick Farrow calls. Convinced that her case is connected to the strikingly similar disappearance of another young girl, Farrow wants Sarabeth's help, and he'll do whatever it takes to get it, even if that means dragging her back to the last place she wants to go--the hills and hollers of home, to face her estranged family and all her deepest fears.
In this riveting new novel from Laura McHugh, blood ties and buried secrets draw a young woman back into the nightmare of her past to save a missing girl, unaware of what awaits her in the darkness.
What's Done in Darkness
Posted by Steve Weddle at 8:00 AM