Can I Get a WITNESS?

Scott's note: This week Richie Narvaez guest blogs here.  Richie has a story in the new collection Witnesses for the Dead, and he's here to tell us the background behind this most compelling story, one I read and enjoyed quite a bit, both for the excellence of the story itself and for the fascinating history I learned about from it involving the island of Puerto Rico.

Can I Get a WITNESS?

My story, "The Gardener of Roses", in the newly released anthology Witnesses for the Dead (Soho Crime, edited by Gary Phillips and Gar Anthony Haywood) starts with a news flash:

“FBI agents shot and killed the dangerous terrorist Edilberto Santos de la Mar today after he opened fire on them in front of his home in Hormigueros.”

And then we enter the POV of the protagonist:

“Except that wasn’t how it happened.”

Indeed, that was not how it happened. My story is based on the U.S. government’s assassination of Filiberto Ojeda Ríos, an activist fighting for the independence of Puerto Rico. The FBI laid siege to his property in Hormigueros. Ríos fought against their M4 carbines with his pistol. He was shot by a sniper and then left to bleed to death. A 237-page report by the U.S. Department of Justice Office of the Inspector General claimed that Ríos posed an imminent threat to the agents, but the report was dismissed by many Puerto Ricans as a cover-up. His death sparked protests all over the island and he became a folk hero.

When Gary and Gar asked me to contribute to this anthology, I said yes right away because I teach G and G in class! They’re stars to me. But also the subject matter was close to my heart. Evil happens in the world, thriving in secret and in shadow. When there is a witness, and the witness is brave enough to come forward, that witness must be protected and supported.

For this story, I invented a witness as a way to enter the story, and I changed names and the time frame to give me more leeway with the plot: a Puerto Rican student journalist witnesses an assassination and has to find a way off the island before the FBI gets her. (In real life, Ríos’s wife, Elma Beatriz Rosado, survived to give an account of the siege. The report contradicted her testimony.)

What I hope is that through my story, and this blog post, I can draw attention to the struggle of Puerto Rican freedom fighters like Filiberto Ojeda Ríos (who was, by the way, known for his rose gardening). Many people do not realize how much Puerto Rico has been trying to pry off the yoke of its colonial status. The U.S. treats the island like a poor relation maintained by handouts, and that is a wrong that must be brought to light.

All royalites from the sales of the anthology will be donated to the Alliance for Safe Traffic Stops, which provides compliance solutions in the form of training, education, awareness, and strategic partnerships between law enforcement and the community. 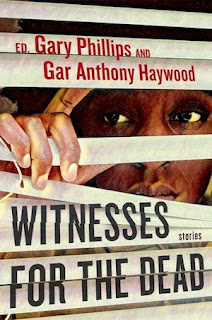 You can find the book at your local bookstores and online here: