Twelve seasons. Still in reruns. Still comfort food TV. And all because of Angela Lansbury. Lansbury died at age 96 last Tuesday, many years removed but forever connected to her role as writer/sleuth Jessica Fletcher.

Murder, She Wrote ran from 1984 to 1996 and starred no one but Lansbury. Sure there was the irascible sheriff and the goodhearted town doctor, but they were merely recurring guest stars. It was Lansbury who owned the screen, taking what could’ve been a stock role and turning it into something special.

That a highly rated show belonged to a middle-aged female character who was unabashedly smart while still allowed to be kind and humorous—well, that would be rare in this day and age. It was flippin’ amazing in 1984. The character wasn’t forced to be either a femme fatale or a dowdy spinster. She sometimes got flirted with by appropriately aged men and wore sensible pumps while showing a little leg, if the occasion warranted it. She made her own living and traveled the world. She didn't have to pack any weapon other than a heavy handbag.

She, in the ultimate fantasy for women everywhere, got to be all these things and successful, too.

So is it any wonder that the show lasted a dozen years? And that people, especially women, speak of it—and Lansbury—with such fondness. Not, I would argue, because she felt like a favorite aunt but because she created a feminist role model. Which made her one in real life, too. 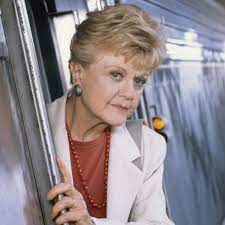 "Jessica Fletcher was probably about as close, not to me, but to the sort of woman that I might have been, had I not been an actress." --Lansbury, in a 2010New York Times video interview done with the understanding it would not be published until her death.

I absolutely agree. Jessica's independence is a powerful attraction to this day. And thank you so much for the picture of the most recent Murder, She wrote books.