You stick around crime fiction long enough, you come across these characters, these singular expressions of humanity that stick around, always on a relentless quest for something they can never have. Harry Bosch is one of the most famous. Jack Reacher is another. Spenser, of course. Miss Marple. Sherlock Holmes. They all have their charms, which spur their longevity. They appear across books and short stories, that final goal always just out of reach. And then there is Bishop Rider.

A one man (except when he has teammates, including one who eventually betrays him) death squad, Bishop Rider has hunted down pedophiles and anyone who relishes in sexual violence across almost 100 short stories. And then he died.

But even after he was dead on the page, Bishop's creator, Beau Johnson, knew there were stories left to tell. Parts of Bishop's life that still could be explored. So he wrote and gathered those final stories in Johnson's final Bishop Rider collection: Old Man Rider:

It’s all come down to this. The past, the present, and the conclusion of man who’s chosen to end so many colliding for the final time.

From an unimaginable start within the pages of A Better Kind of Hate to a bitter, bloody end throughout All of Them To Burn, Bishop Rider remains what he’s always been. What a certain type of predator forced him to become. His life and struggle not only a journey of choice driven by necessity, but one decades in the making.

There will be carnage. There will be blood. But through it all, a sliver of hope. And perhaps, if he’s lucky, a chance at brighter days.

Time to go to work.

Hot damn. And the cover, which Beau was kind enough to "officially" let me reveal below, is also stunning: 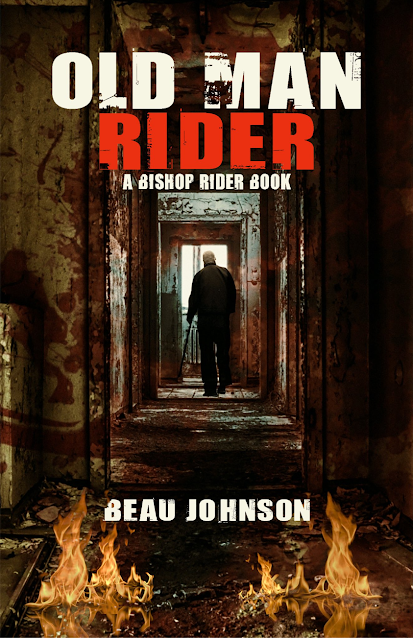 Beau and I spoke recently, about Old Man Rider, his first memories of Bishop, and how it feels to hang it all up. Read it, and when you're done, don't forget to preorder Old Man Rider right away. I can promise, you won't want to miss it.

Okay: a few questions. Let’s go back to the beginning. Do you remember the first time Bishop Rider showed up in your head? How long did it take you to realize he’d have the kind of longevity he’s had?

Let's see, the youngest is almost sixteen, he was almost two when I got back to writing, so carry the one...fourteen! It's been roughly fourteen years since Bishop entered my head. It took me about four or five stories to realize I had something with legs, which was awesome in itself, but as for his longevity, yeah, it took me a bit longer to realize that aspect.

If you had to name your best Bishop Rider story, which one would you pick?

Ha! Man, there's so many now.  I really don't think I could pick just one, but since you asked, of the ninety-six that make up Rider's life, I guess I'll go with A Better Kind of Hate. It's short, it's punchy, it's Rider to a T.  And if I'm not mistaken, I believe it's the first time I had two different versions of Rider in the same story.

Bishop, kind of famously, is dead. But the stories kept coming. When he died, did you know you were going to go back and fill in more stories from before, or was that your first attempt at leaving him behind?

Well, there's two stories there. Because I write Rider's story out of sequence there's always some wiggle room to revisit, hit another perspective, or make up whole parts of his life in general.  Most of his stories have a built in sequel/prequel element to them too, if it's an angle that interests me enough.  It doesn't always play out this way, but it happens enough that I can't deny it. But anyway, back to killing the man..  Yes, that was the plan.  Right after I saw that Infinity War trailer with Downey's Stark saying 'part of the journey is the end', it got me thinking about the end of Rider---that it at some point would occur.  The question that followed was would it either be in a blaze of glory or would he get to do what he feels he has to for the remainder of his days.  Well, I chose the latter, giving him forty years of slaughter to play with, knowing I might have a story or two down the line as there were some plots threads I'd left open. However, as I was doing edits for ALL OF THEM TO BURN (my 3rd book and the one Rider dies in) something happened, and this thing, I've mentioned it before: writing begets writing begets writing. So really, choosing to kill Rider as I did gave birth to both BRAND NEW DARK and OLD MAN RIDER, which combine to close out Rider's life. Some of this I foresaw, sure, but not all of it was planned.  Nope, not all.

You’ve said that this is your last book. That, now that Bishop is done, you are too. How did it feel to write the last line of the last story? Was there a grieving period? Also, how sure are you this is it? Is there any chance of Beau coming back, maybe with a new character?

I'll never say never, but yeah, I think that's it for this Canadian. And don't get me wrong, I'll always write, and from time to time I'll probably drop a story or two on the internets, but as for publishing books, yeah, I'm tapped. As for the last line and how it felt, well, I had that particular line in my head for a couple years now, so I knew where I was heading, which had me pretty much prepared.  Still a little sad, sure, but just between you and me, Paul, I might have given Bishop a little hope there at the end.  The world being the state it's in on an almost daily fucking basis, I felt it was the least I could do. But please, that stays just between us. I have a reputation to keep!Anyway, thanks for having me Paul. Thank you for your time. Great questions.