A High School Reunion and a Murder: Girl Most Likely by Max Allan Collins 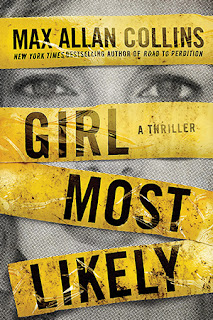 Last week, I mentioned a new way to consume a story, via a Kindle ebook and its corresponding audiobook. The book in question was Girl Most Likely by Max Allan Collins. Well, I’ve finished the novel and here is the promised review.

The lead character is Krista Larson, a twenty-eight-year-old who serves as the police chief for Galena, Illinois, a small, Midwestern tourist town. This makes her simultaneously the youngest police chief in the country and the youngest female chief. As we’re told throughout the novel, her department consists only of a dozen people, herself included.

Her father, Keith, was also a cop, but one from a larger town across the river. They live together now in the wake of her mom’s passing. They have a good relationship, nothing like the oil-and-water relationships you see on TV or in other books.

Speaking of TV, Collins intentionally set out to write “an American variation of the [Kurt] Wallander novels, and such Nordic TV mini-series as The Bridge, the Killing, and (again) Wallander.” Being a fan of those programs myself, that was pretty much all it took for me to download the ebook and audiobook and start reading.

There’s a certain style of mystery—mostly thrillers, I guess—where there’s running on page one or a murder on page one and that sets the entire tale in motion. That’s here in this book, too, but via a fun writerly quirk: all the times the killer in on stage, Collins writes those scenes in second person, that is, from the killer’s point of view. It serves more the one purses. The obvious one is that you get a peek inside the killer’s mind, what drives the killer to kill. The other obvious thing is that Collins hides the identity of the killer. By the time a reader reaches the end of the novel and know who did, it’s fun to return to those chapters and see how the veteran writer spooled out the clues.

Other than the opening chapter, the bulk of the novel sets the stage via its characters and surrounding environment. It’s a day-to-day life of Krista and her friends as they prepare to attend their ten year high school reunion. We get nice portraits of the folks who never left small town life as well as those who return from bigger cities. As the title of the book indicates, there is one character—Astrid Lund—who is the girl most likely to succeed, and boy has she. Astrid (a nice nod to the Nordic) has blossomed into a stunner who works in TV broadcast news up in Chicago. She broke up more than one relationship back in high school and her presence at the reunion threatens those same people. Most everyone reacts to her in one way or another. She’s like the sun: her gravity either pushes or pulls all her classmates.

What I found particularly fun is how Collins weaves the characters in and out of the story in such a way that you almost wonder if you are merely reading a traditional drama rather than a murder mystery. You kind of have an idea of who is going to be killed, but you still wonder when it'll happen, but when it does, it's visceral. Three people end up dead in this story, so this small town police chief ends up having a triple murder investigation. She draws on her father’s experience as a homicide detective while keeping the investigation local and not calling in the state police.

As a writer, describing a character is always a challenge. How much do you give? How to you give it? Do you do it every time a character walks on stage? Collins does it nearly every time, but he usually dispatches the description in a sentence or two. Interestingly, he goes a step further and details their voice, usually in the form of a musical notation: his baritone, her soprano. Being a musician like Collins, I dug that and, frankly, it never even occurred to me to do that.

Like the BBC shows that inspired Collins to write this story, this is a full-on police procedural. Krista and her dad ask lots of questions and follow leads. You definitely have to be in a mood for this kind of story, and it’s where I have an issue with the sub-title: A thriller. I don’t consider this a thriller at all. Sure, there is the ending, but when I think thriller, I think lots of running and shooting and more running and reading so fast that you quickly start to turn the pages or increase the narration speed. Girl Most Likely moves forward in a determined manner where you know you’re being given some red herrings and try and decipher the clues before the characters.

I enjoyed Girl Most Likely quite a bit. It was exactly the type of story I wanted and it easily met my expectations. In fact, I liked it so much that I already downloaded both the ebook and audiobook of Girl Can’t Help It, the second novel featuring Krista Larson. And, since I enjoy reading “seasonally,” I was pleased to note Girl Can’t Help It takes place around Labor Day. I’ll give you zero guesses when I start the book.
Posted by Scott D. Parker at 1:00 AM

Thanks for this great review. I will link it at my weekly blog. I requested "Thriller" not be used on the second novel, but I think "thriller" is such a nebulous term these days I'm not sure it wasn't appropriate (enough), considering the chapters from the killer's POV and the ultimate harrowing chase. I was pleased to see you didn't have either of the two usual complaints I get about the book, (a) too much clothing description and (b) no post-climax wrap-up chapter. As to the first, I don't care to have my characters running around naked (and clothing is key to how people present themselves at a class reunion), and (b) when the story is over, it's over. Anyway, much appreciated.