Scenes from a Writer's Mind

Among the many films I thought of yesterday on hearing the news that David Warner died was the 1977 film Providence, directed by Alain Resnais.  I mention it here not only because I liked the film very much, but also because it's one of the best movies ever made about a writer and the creative workings of a writer's mind. 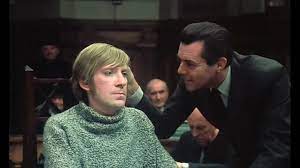 The writer is an aging and frequently drunk man named Clive (John Gielgud) who lives in a large and somewhat Gothic house in Providence, Rhode Island.  He is working on his new novel and a somewhat odd one it certainly is.  It involves a mercy killing, a trial, a dark forest, a macabre autopsy, and perhaps even a werewolf.  The characters in this story are based on Clive's family, specifically his illegitimate son Kevin (Warner), his son Claude (Dirk Bogarde), and Claude's wife (Ellen Burstyn).  Clearly, there is a lot of vitriol among these three and between each of the three individually and Clive.  Or is there?  How much of what we are seeing of these people/characters matches how they actually are and how much is Clive adding to and distorting their personalities to suit his creative needs?  Imagination, time, and memory all play a part in this complex weave, and the author Clive, as he creates, twists around, and recreates mental scenes involving these three people, has little but caustic commentary about them.  That commentary is quite funny, and much of what he composes in his mind is somewhat ridiculous...but, of course, isn't that how a writer's mind works when it is in that stage of free-flowing reverie? 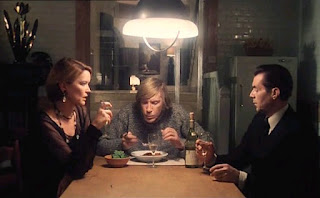 In the second part of the film, which takes place the day after Clive's drunken imaginings, we see the actual family members he's been thinking of, and the view of them now is quite different.  But does what we see of them in this section, in the cold light of day, undo everything we learned about them before, when we saw them through Clive's mind? 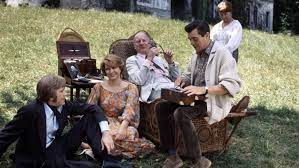 I didn't see Providence in the theaters when it opened, but I saw it maybe a year later in the late seventies when it was a staple, in regular rotation, on HBO.  And since then, from what I can tell, it has been difficult to find.  As of right now, it doesn't appear to be streaming anywhere, but there is a pretty good print of it you can watch on YouTube.  It's a film that got both acclaimed and lambasted by critics when it came out, which means nothing more than it's not to everyone's taste.  A couple of things are certain: it is not a film that is supposed to be naturalistic and the acting by all the principals reflects that.  That's especially true in the film's first part, but then again, isn't what we're seeing then how the people are behaving in the old drunken writer's imagination?

Music by the great composer Miklos Rosza, a nod or two in its Gothic imagery to the specter of Providence himself, H.P. Lovecraft, and ultimately a moving look at a dying writer's fantasies and memories, his determination even as he fades to keep on making up stories.  It's just a superb movie, one that can keep revealing itself after one or two viewings, and it's a true writer's movie.  And in David Warner's career, it's yet another example of the actor's versatility and skill.

Posted by scott adlerberg at 7:37 AM