Thriller writer James L'Etoile stops by today with a few training tips for writers. The cute dog photos are just a coincidence. - Claire

Claire, thanks for letting me guest post today on Do Some Damage. With DEAD DROP fresh out on the streets, I’m in that sweet spot somewhere in between exhaustion from finishing all the work to get a book published and anxiety that no one will read it. I barely remember the last few months of revisions. Then there’s the publicity and marketing and the worry if I’ve done too much and people are sick of seeing my stuff, or what if I’ve haven’t done enough and no one knows about the book?

There’s only so much you can control. A simple concept, right? But, it’s something the Corgis reminded me about during one of our walks. I use the time with the dogs to do a bit of training with them (they both have obedience and therapy dog titles) while I mull over characters, plot points, and scenes I’m writing. During one of these walks, it struck me how much dog training and writing have in common. I know, you’re thinking I’ve gone to the dogs… 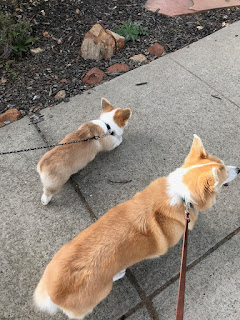 If I listen to what Emma and Bryn the Corgis tell me, they firmly believe they are responsible for DEAD DROP because they have been training me.

They remind me of a few basic commands and rules used in dog training:

Rule: Stay on Leash. On walks in the community, the Corgis stay on leash. It’s not only courteous to the neighbors and other dogs, but it also makes sure the Corgis pay attention and stay on task. They tell me I need a leash while writing to keep me from distractions and wandering off from the keyboard. Which leads to command 1:

Sit-Stay.  Once I’m at the keyboard, they tell me I need to park there and don’t get up until I’m released. There will be emails, social media, phone calls, and all sorts of interruptions, but while I’m in a “Sit-Stay” I’m supposed to focus on one thing—writing.

Heel: Generally speaking, when you give the dogs a heel command, they are to follow your lead. This also applies to writing. I have to pay attention and “Heel” while I’m writing, which means follow the damned outline. 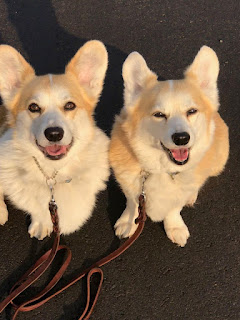 Look: Sometimes a dog will get excited and lose focus on the task at hand. The “Look” command gets their attention, and they are supposed stop whatever it is they’re doing and make eye contact with you. I can get off-task from time to time with scrolling on Instagram or procrastinating on just about anything other than writing. “Look” should get me re-focused on the job at hand, namely putting the words down on the screen.

Roll Over: I’ll admit this is a hard skill for my Corgis to manage. But the idea is stop, drop, and roll. Sometimes you just need to roll around in the stinky stuff to forget what else is going on. For a writer, a “Roll Over” could mean put that review/rejection/scene that’s just not working behind you and get back at it.

Rally: While not a command, both Emma and Bryn have Rally titles, where they follow a course with me where we perform skills like this: 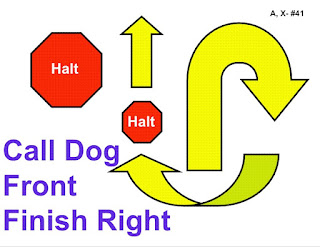 This also looks very much like one of my story outlines.

And finally, the “Clean up your own mess” rule. In the dog walking world, it’s a simple concept. Don’t pee in your neighbor’s yard. I’m talking about the dogs, because when the humans do it, that’s a whole other set of issues. The cops are called and the handcuffs come out … But, where was I, oh, yeah, if your dog answers nature’s call and leaves a deposit, be kind and pick it up. No one wants to see your mess. The same applies to writing. Your mess of a first draft needs to be cleaned up and revised before another human sees it.

I guess, Emma and Bryn have a point. I do use much of what they’ve taught me in my daily writing routine. Now, where are those tasty treats… 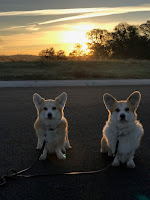 James L’Etoile’s latest thriller, DEAD DROP, hit stores last Tuesday. You can get it at your local independent bookstore or through IndieBound, Amazon, or Barnes & Noble.

Hundreds go missing each year making the dangerous crossing over the border. What if you were one of them?
While investigating the deaths of undocumented migrants in the Arizona desert, Detective Nathan Parker finds a connection to the unsolved murder of his partner by a coyote on a human smuggling run. The new evidence lures Parker over the border in search of the truth, only to trap him in a strange and dangerous land. If he’s to survive, Parker must place his life in the hands of the very people he once pursued.
Border violence, border politics, and who is caught in the middle. The forces behind it might surprise you. 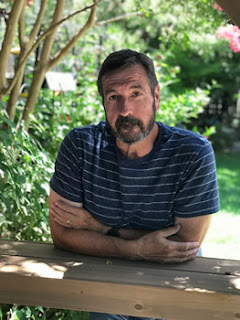 James L’Etoile uses his twenty-nine years behind bars as an influence in his novels, short stories, and screenplays. He is a former associate warden in a maximum-security prison, a hostage negotiator, facility captain, and director of California’s state parole system. He is a nationally recognized expert witness and consultant on prison and jail operations. L'Etoile's crime fiction work has been recognized by the Creative World Awards, Acclaim Film, and the Scriptapalooza Television Script Competition. Major social themes weave through his work, including the world of human trafficking, black market organ transplants, homelessness, domestic terrorism, immigration policy, political corruption, and the pharmaceutical industry.

Emma, Bryn, and I appreciate the guest post on Do Some Damage. Thanks, Claire! And now the pups are telling me they deserve treats …