Escape from a Confined Space, or Die

I went to see the film Black Phone recently, and while watching, I couldn't help but think about how that oldest and most basic of story types, the survivalist tale of a single person trying to escape a confined space before he or she dies, remains effective when well-done. Get away from a basement where a child abducting serial killer has taken you, or become the killer's next victim. That's the essence of the story, adapted from Joe Hill's short story (which I haven't read), and it works as a taut suspense tale.

I'm wondering how far back these stories go.  Poe's "The Pit and the Pendulum" I would assume is an early example, with its narrator trapped in a pitch-dark room that contains both a pit and a lethal pendulum, and then, after he manages to escape his bonds and the pendulum's blade, walls that become burning hot and move inwards towards the narrator.  The plot boils down to a man having to force himself, after a period of panic and terror, to calm down enough to think clearly to figure out if and how he can escape. In "The Pit and the Pendulum", as in some of these stories, the narrator does not escape himself, but finds a way to delay his death in the room long enough for others to rescue him.
"A Descent into the Maelstrom" is another great variation on the trope, since it involves confinement and imminent death in what amounts to a freakish confined space outside, an ocean whirlpool.  In the midst of an overwhelming force, a seemingly hopeless situation, the man trapped in the whirlpool uses his powers of observation to discover a way to slow his descent toward annihilation, and in so doing buys time until, after several hours, the whirlpool subsides and he's rescued by fishermen. 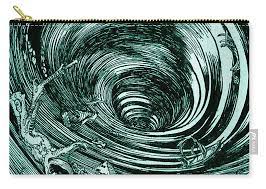 As is usual with Poe, both these stories serve as prototypes for countless stories to come.  A person confined by some means in some sort of space will likely die.  The fear, anger, and despair that come with the recognition of the predicament take over the character for a stretch. But at some point, a determination to escape becomes part of the thinking, and at that point, the story becomes one that foregrounds ratiocination. Under great pressure, the trapped figure realizes that only by using reason and intellect will they have a chance to survive.
In its main thrust, I suppose, the confined person story is related to the classic mystery story.  Are there any other genres that elevate the sheer use of reasoning to such a high degree?  But the trapped person story is the inverse of the ratiocinative mystery.  In the mystery, the detective uses logical reasoning to make sense of something puzzling and unresolved.  The main bad things that happened in the story happened to someone other than the detective, so at some level at least, even though the detective character faces dangers, that character has a certain distance from the people most affected by the dire events.  The goal, of course, is to discover truth, stakes that are high enough, but the detective could in theory (and sometimes does) fail to reveal the entire truth (or even any truth) and still live afterwards. In the trapped person story, it's use reason to think up something that works for you or you will actually perish.  The stakes are the gravest imaginable.  There is no detachment obviously, no room for error, for the person in confinement.  But even in stories where luck plays a part in helping the confined person survive, the victim's chances primarily hinge on an ability to apply orderly logical thinking in the way a detective on a complicated case would.  Against all odds, when everything seems beyond hope and after bouts of delirium, you might remember, knowledge and intellect winning out, that blood is a very slippery substance, and that if you cut your own handcuffed wrist with a piece of the water glass within reaching distance, if you can then bear the pain of peeling back the slashed skin on your wrist, you'll be able to free that wrist of the handcuff and get away...as happens, so memorably, in Stephen King's Gerald's Game, one of my favorite escape or die stories of the past several years.
In Black Phone, there is indeed a mysterious black phone that allows the  killer's previous victims to communicate with the trapped boy, Finney.  It gives Finney advice on how to deal with his predicament and exploit weaknesses in the captor's basement dungeon.  So perhaps that's a bit of an uncanny element, but the phone calls effectively serve as an impetus for the trial and error that Finney employs in his escape attempts.  You could say the phone calls dramatize what is going on in Finney's mind as he reasons with himself, fights his fears, and learns to stand up for himself -- all of which enable him to prolong the time he remains alive and improve the chances that in the end, he will get out.  And as happens "The Pit and the Pendulum", or that CSI episode from years ago, "Grave Danger", in which one of the team, Nick Stokes, is buried alive in the middle of the desert, the longer the person confined can keep themselves alive, the better the chances that someone outside or those working specifically to find you will be to assist in your deliverance.
Such a simple story template, but a timeless one that keeps on working.
Posted by scott adlerberg at 1:00 AM