I've been doing some reading on the old Hollywood director William Wellman in preparation for the first of the film talks I'll be hosting this year for the Reel Talks series I'm part of every year in New York City.  That talk will be about Wellman's westerns, in particular the great 1943 film The Ox-Bow Incident.  But on casually reading up about his career and his 1939 movie called The Light That Failed, adapted from a Rudyard Kipling novel, I came across a peculiar murder story connected to this film, a story I'd never heard of before.  It's a murder story that sounds like something out of an old Columbo episode.  You can just see Columbo on a case like this, investigating in the movie theater where the crime occurred, watching the film to study the exact moment when, in the theater and as the film played, the killing took place.

But let me explain:

On May 29, 1946, in Bristol England, during a showing of Wellman's film at the Bristol Odean, the manager of the theater was shot in his office there.  About 2,000 people were watching the movie at the time, but nobody in attendance did a thing in reaction to the gunshots -- there were two -- and continued to watch the movie as though nothing had happened.  The reason for their apparent nonchalance about the gunshots: nobody heard them because they had been timed to coincide with gunshots fired onscreen.  The film started at 6:25pm that evening, and the gunshots in the movie occur early, shots that blind the story's main character.  It was just then, according to the story, that the real-life murderer struck. The theater manager was Robert Parrington Jackson, father of a four-year-old son.  The theater's cafe supervisor walked into Parrington Jackson's office between 6:40pm and 6:45 pm and found him lying on the floor, bleeding from a head wound and moaning.  Alerted by the cafe supervisor, detectives from a nearby station rushed over to the theater on foot, and though they began right away to investigate, with two uniformed officers guarding the office, the screening continued without interruption.  I don't think Alamo cinemas of today, with their stated devotion to creating an undisturbed viewing experience for their patrons, would go so far in film viewing dedication.  Reports from the time do say, however, that a message flashed up on the screen asking whether a doctor was in the house. 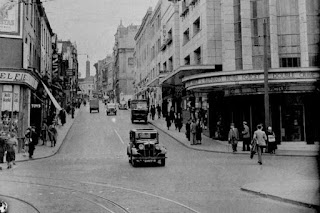 That's the Columbo part, though unlike in the tv series, there's no person in the story who clearly, from the get-go, is the culprit.

There are theories as to who killed Parrington Jackson, of course.  One at the time said he'd been shot by a man who thought the theater manager had been flirting with his girlfriend.  Another said that Parrington Jackson had gotten an usherette pregnant and that the usherette's boyfriend did it.  Year later, in 1989, a small-time Welsh crook on his deathbed confessed to the crime, telling his son, who relayed his story to the police.  The claim here was that the crook, with an accomplice, had gone to the theater to rob its office safe, but that the pair of thieves had panicked and shot Parrington Jackson when he walked in on them. In fact, just before he was shot, Parrington Jackson had put the night's take away in the safe and it was a substantial amount.  But the keys to the safe were found in his pocket and the money he'd locked away was untouched.  Whoever shot him, Parrington Jackson died a short time afterward at the nearby hospital.

Police kept poking around and they interviewed a number of suspects, but their inquiries led nowhere.  They found the murder weapon a few months later, in a water-tank left over from World War II and then used by firefighters, but no new leads came from this either.  Eventually, the police shut down their investigation, and despite the death bed confession just mentioned, they consider the case still unsolved.  They did, not too long ago, reopen the investigation as part of a review looking at a number of unsolved cases dating back decades. They have not given up looking into who killed Robert Parrington Jackson.  But so far, the killing in the Bristol movie theater, where the gunshots, either on purpose or inadvertently, were timed to the exact moment gunshots were fired in the film showing in that theater, remains the coldest of cold cases. 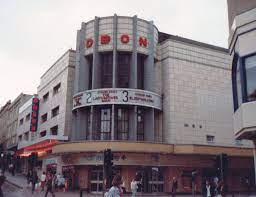 Posted by scott adlerberg at 7:56 AM