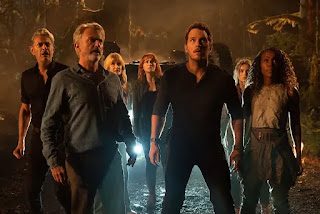 I’m not sure what movie some folks watched but it sure wasn’t the one I saw.

When it comes to movies, I make it point not to read any reviews ahead of seeing a movie I want to see. If the trailer hasn’t grabbed my attention and compelled me to watch—or the pedigree of the actors, writers, and director—then I don’t seek out the Rotten Tomato score to sway me. This is not the same with books in which I will happily read and take into consideration the opinions of dozens of fellow writers when they recommend books.

But once I’ve seen a movie, I am curious to know the general consensus and see if it lines up with my experience. When I saw the 2.5 hours of Jurassic World: Dominion (AKA Jurassic World 3 AKA Jurassic Park 6), I was enthralled, entertained, and emitted more than a few utterances of “Yeah!” and “Cool!” It ended the 6-movie franchise quite well, introducing the original Park actors with the new World actors in a way that felt organic. The music was nicely used throughout, including the elegant main theme from John Williams—both the orchestral as well as the softer piano version. There were dino-on-dino fights, a kick-ass motorcycle/dinosaur chase through a European city, and a dino/airplane chase. There were dinos in the water, dinos in caves, and dinos in snow. All things we’ve not seen before.

Well, I’m pretty sure we haven’t. I’ve pretty much got the first movie memorized. The Lost World and Jurassic Park III, a little. Jurassic World I remember decently and I all but forgot World 2: Fallen Kingdom.

But I remember the closing show of Fallen Kingdom well, accompanied by Jeff Goldblum’s voiceover. Dinosaurs now live among humans and we’re going to have to learn to co-exist as best as possible. And that’s how Dominion starts. It shows us a world like that. Granted, it’s not one I’d prefer to live in—don’t need the possibility of my plane flight being overtaken by a pterodactyl—but it is one original author Michael Crichton envisioned and that Goldblum’s Ian Malcolm keeps talking about in every movie he’s in. So in that respect, Dominion gets it correct.

So imagine my surprise when I hop on over to Rotten Tomatoes on Monday night—after eagerly relating all the fun and cool stuff in the movie to my wife who didn’t go—that the critical consensus was so poor. Again, what movie did these folks watch?

Okay, the plot. There are two threads. The World Plot has Owen and Claire trying to protect Maisie from the rest of the world because she’s a clone. Blue the velociraptor lives nearby and has unexpectedly produced a young raptor called Beta. (It shouldn’t be unexpected because “Life always finds a way.”) Bad guys kidnap both younglings and Owen and Claire follow.

The Park Plot involves our three original cast members and boils down to Laura Dern’s Ellie Sadler researching why formerly extinct massive locusts are eating some crops but not others. If they’re not stopped, there will be a global famine, yet the locusts don’t seem to be eating crops grown from seeds provided by Biosyn, the new bad-guy company a la InGen from the Park movies. She makes the assumption—with an assist from Malcolm—that Biosyn is behind both the seeds and the locusts. She enlists the help of Alan Grant (Sam Neill) and they set off in search of proof at Biosyn’s giant lab/breeding ground/dinosaur habitat in Europe.

Which is exactly where the kidnappers are taking Maisie and Beta. Naturally, the World characters and the Park characters will meet—the selling point of the film—and they’ll battle enemies both dino and human. Along the way, there are wonderful set pieces that are the definition of a summer blockbuster. In fact, as Owen is racing through the streets on his motorcycle, trained raptors on his tail, you see the aforementioned plane start to warm up. I leaned over to my son and said, “I bet he jumps into the open plane in midair.” Viola! That’s exactly what happened.

Yes, that entire sequence felt like an espionage film (Bond, Bourne, Mission Impossible) but who cares? It was thrilling. There were lots of other thrilling moments as our heroes fight to stay alive, but not without some humor along the way.

But there are also some great character moments. Goldblum is having a field day as Malcolm, just chewing scenery left and right and I loved every second of it. The quiet moments are also good, like when it’s just Ellie and Alan seeing each other for the first time in decades, subtly lamenting lost time. Yes, their story line got a little bumbly as they tried to escape from the locust lair but it was minor.

I also liked how certain scenes were set up so that you *think* you know what’s going to happen but then your expectations are subverted. Case in point: Goldblum’s Malcolm is stuck holding a flaming piece of a spear-like metal pole and there’s a dino looking at him. In Park 1, he doesn’t know to throw the light source and freeze. Well, I said to my son, I bet he’s learned now. Nope. Not what happens. But it’s way cooler.

Scott Campbell, as the bad guy, plays Lewis Dodgson oddly. He is all bad at one moment and then weirdly like an absent-minded professor the next. I liked that they used him as a character although in the movie, it isn’t explicitly stated that he was the character in the original Jurassic Park who pays Wayne Knight’s Dennis Nedry to steal embryos in the Barbasol shaving cream can. But said can is a trinket in Dodgson’s office as he tries to escape. And I won’t even tell you what happens to him, but if you’ve seen Park 1, you have an idea.

Speaking of that, I like the little subtle Easter eggs like when Ellie takes off her sunglasses in a manner almost identically to Alan from Park 1. Nice touch.

The nostalgic part of me would have liked one last shot of all the Park characters together. Sadly we don’t get that, but we do get some resolution for everyone. And character growth. And bad guys getting what’s coming to them. And dinosaurs. Lots of dinosaurs.

Again, I’m just not understanding why the dislike for the film. The audience score on Rotten Tomatoes is 79% so clearly it’s resonating with folks. It resonated with me quite well and I thoroughly enjoyed the film.