It's entirely unpredictable how a writer will wind up on your radar as a writer you want to read.  Case in point for me: the Italian writer Alberto Moravia.  Yesterday, while at work, I put him near the top of my list as someone I want to read soon.

It's not entirely true that I just put Moravia on my radar yesterday.  He's been on my radar for some time, mainly because I've seen a few film adaptations of his novels.  These include The Conformist, from 1970, Bernardo Bertolucci's great film with Jean-Louis Trintignant as the title character, a man in Fascist Italy who has an intense need to conform to whatever the predominant political group is during his time, and Jean-Luc Godard's 1963 Contempt, one of my all-time favorite films and among (that middle section) the saddest films ever made.  I also liked a film called Ennui (or Boredom), from 1998, an adaptation of a Moravia book called La Noia (1960), about -- the film -- an older and somewhat jaded philosophy professor who becomes involved with an easygoing younger woman who was the lover of a now-deceased painter.  All three of these films, among other things, contain a great deal of psychological nuance in the characters, something I love. And yesterday, while at work, in the throes of what you might call midday workday ennui, I took a break from my duties and started scrolling the Internet and somehow came across, on Amazon, the page for the New York Review of Books Classics edition of Moravia's Contempt. 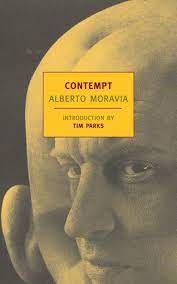 I started reading the introduction to the Kindle version, written by novelist and translator Tim Parks, and read this passage about Moravia's writing, which I found fascinating:

In his novels, "There is the hyper-conscious protagonist whose lucid reflections revolve remorselessly around feelings and events that will remain forever obscure.  There is a profound melancholy that will never quite be placed but is such as to make every event, every memory, pregnant with possibly unwelcome explanation.  A heavy cloud of menace looms over the most trivial of encounters: what appalling truths are perhaps about to be revealed, what terrible mistakes will be made?  However domestic and apparently innocuous the scene, no sooner has Moravia's cool rational voice begun to describe it than we are filled with an irrational apprehension."

Parks goes on to say that a typical Moravia central character is a "disturbingly lucid individual" who "seeks to identify the source of his unhappiness", who "reaches certain conclusions, decides on a certain course of action.  Then an accelerating series of events, in the course of which both the characters around him and the protagonist himself are seen to act in the most unpredictable, though somehow inevitable and pre-determined, of ways, makes a mockery of all his reflection, all his yearning for comprehension and control...The real as we experience it, [Moravia] insists, does have this surreal, oneiric, often farcical quality."

After reading this, I went to Wikipedia and looked up Moravia, to find that "his writing was marked by its factual, cold, precise style" and was "regarded for being extremely stark and unadorned, characterized by elementary common words in an elaborate syntax."

I ended my Moravia pause there, closed my browser, and got back to regular work at my desk, but for the rest of the day, I was thinking about what I read and how I have to get to reading this writer soon because I'm sure I can learn a lot from him that I can apply to my own writing.  I've long found that temperamentally I tend towards a somewhat cold, factual and, hopefully, precise way of writing, and I absolutely try to use unadorned language.  And that blend, as Tim Parks describes it, of having a lucid, analytical type character who attempts to chart a rational course through life, only to find that these attempts fail due to life's vagaries and, yes, often farcical quality, not to mention the character's own blind spots and unacknowledged irrationality, is exactly a blend I love playing with, that strikes a chord with me.  There is no trip like the trip through the mind and emotions of a person as they try to navigate through life and love and sex and everything else.  And when that trip is taken through a lucid mind that keeps abutting difficulty, some of that difficulty created by the lucid mind's propensity towards overanalysis, you have fiction, to my mind, that can be so compelling -- at once melancholy and comic.  It's a type of writing I aspire to, and so, I'm glad I took that short break yesterday at work and stumbled upon the Moravia page because, as I said, it made me think that it's a high time I finally took up one of his books to see how a master does certain things I've been spinning around in my mind for years.

Posted by scott adlerberg at 7:38 AM