"I blundered into my dream job:" A chat with Chris Holm

By Steve Weddle
CHILD ZERO, the new Chris Holm book we've all been waiting for, published this week. Launch day seems to have gone well, as the book went into its second printing on day one. 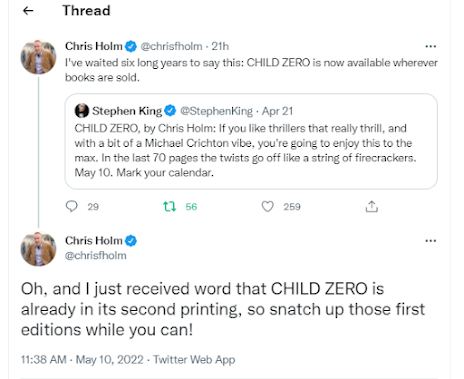 Fortunately, I was able to chat with Chris Holm during a quieter spell and was surprised to learn about his connection to Ryan Gosling. But first, a few words about the book ->

It began four years ago with a worldwide uptick of bacterial infections: meningitis in Frankfurt, cholera in Johannesburg, tuberculosis in New Delhi. Although the outbreaks spread aggressively and proved impervious to our drugs of last resort, public health officials initially dismissed them as unrelated.

They were wrong. Antibiotic resistance soon roiled across the globe. Diseases long thought beaten came surging back. The death toll skyrocketed. Then New York City was ravaged by the most heinous act of bioterror the world had ever seen, perpetrated by a new brand of extremist bent on pushing humanity to extinction.

Detective Jacob Gibson, who lost his wife in the 8/17 attack, is home caring for his sick daughter when his partner summons him to a sprawling shantytown in Central Park, the apparent site of a mass murder. Jake is startled to discover that, despite a life of abject squalor, the victims died in perfect health—and his only hope of finding answers is a twelve-year-old boy on the run from some very dangerous men.

Steve Weddle: This book has been getting starred reviews all over the place. What’s it like to be an overnight success?

Chris Holm: As of this writing, it’s only gotten one starred review, so your choice to pluralize feels like a provocation. Still, everybody who’s read CHILD ZERO seems to like it, which is nice. It’s gratifying to be rewarded for something into which I put so little effort. I mean, I tell people this book took me six years to write, but I spent the majority of that time replaying Tony Hawk’s Pro Skater in my pajamas.

SW: Much has been made in the publicity for this one about the collapse of the antibiotic era and the threat of infections. But I don’t want to talk about all that science stuff, because at the heart of this book is, well, the heart of the book – the threat to Jacob Gibson’s family, which feels very real and very personal. What can you tell us about Jacob and his daughter?

CH: Jacob Gibson is a homicide detective in a New York City still reeling from a bioterror attack three years prior that killed nearly one hundred thousand people—his wife, Olivia, included. Had it not been for their infant daughter, Zoe, her death likely would’ve broken Jake.

At the book’s outset, Zoe—now four—comes home from daycare with an infection. These days, that’s a common enough occurrence, and hardly cause for concern. In a world without functioning antibiotics, it can easily prove deadly, and failing to report it to the Department of Biological Security might well cost Jake his job—a risk he’s willing to take to prevent Zoe from being locked away in a dodgy, state-run sanitarium.

SW: OK, I lied. I do want to talk about the science. I’ve read thrillers in which the non-fictiony part overwhelms the story and the characters, stopping any momentum to explain art restoration or religious history of whatever window dressing the author is using for the thriller. But you lay the groundwork here seamlessly, with straightforward talk about antibiotics and infections, about viruses and bacteria. What’s your secret for smoothly delivering all that science stuff?

CH: That’s kind of you to say. To my mind, incorporating some admittedly heady molecular biology without boring the crap out of my audience was the biggest challenge of the book, so I began by laying down a few ground rules.

First, I wanted to keep info-dumps to a minimum, and couch them in scenes that illustrate the real-world implications of the science—or, in other words, no talking heads in lecture halls.

Second, I did my best to use plain English to describe the science—which, for someone who spent two decades of his life in laboratories, isn’t as easy as it sounds—and ran it past nonscientists (my wife, my agent, my editor) to see if it made sense.

Third, I kept paring those sections down until there was nothing left for me to cut without sacrificing their scientific accuracy.

And fourth, I knew I’d need a heaping helping of sugar to help the medicine go down, so I packed the story with breakneck action from start to finish.

SW: Your first Collector novel came out about a decade back and was the first in a trilogy, Seven years back, the first of your two Michael Hendricks novels came out. Any interest in revisiting these stories, either for print or for the screen?

Truth is, there are several ways this question could be interpreted, but the answer above applies to all of ’em. Would I like to write more Sam Thornton or Michael Hendricks books? Yup. Would I be happy if someone adapted them for the screen? Most definitely. Would I be willing to adapt them for the screen myself? Sure, although I suspect there’d be one hell of a learning curve.

While we’re on the subject, here’s a scoop: though I haven’t talked about it publicly, THE KILLING KIND was optioned ages ago, and is currently in preproduction. Adam Siegel, Ken Kao, and Ryan Gosling (yes, that Ryan Gosling) are producing. Ben Foster is expected to star.

SW: Speaking of your earlier novels, while Child Zero feels like the perfect novel for right now in terms of the zeitgeist, is it also the perfect novel right now for you? Do you feel as if you could only have written this novel at this point in your career? Are there lessons you needed to learn before you got to this point?

CH: I hope it’s the perfect novel for the moment, but the fact is, I never intended for it to come out during a pandemic. I’m as traumatized as anybody by the events of the past few years. That said, the book’s not so much a pandemic story as it is a breakneck thriller set against the backdrop of a pandemic. Time will tell if that’s a distinction without a difference.

As for whether I could’ve written it before now… beats me, but if I had, it wouldn’t be half as good. I’m a stronger writer now than when I started out, and CHILD ZERO still required every trick, technique, and ounce of skill at my disposal.

SW: This may seem like a small thing, but many authors are super concerned about their own brands and how to position themselves, how to stand out in a crowded marketplace and so forth, how to establish themselves. I know many writers who think about pen names for different types of books, who think about using initials instead of a first name, and other considerations. You went from Chris F. Holm to Chris Holm when you moved from Angry Robots to Mulholland. Why the change?

CH: My wife and I joke that the “F” stood for “Fantasy,” since that’s the genre I was working in back then. Alas, the truth is more mundane. By the time I began establishing an online presence, all the Chris Holm URLs and handles were long gone, so I used my middle initial—which, if you’re curious, is short for Frederick.

Between series, I switched agents, and my new one hated the whole middle initial thing. To hear him tell it, Chris Holm sounds like a guy you’d grab a beer with, while Chris F. Holm does not. I didn’t have strong feelings either way, but my books sell a whole lot better now, so maybe he was onto something.

Every now and again, I toy with the idea of putting some stuff out under a pen name, but I dunno. It’s taken a long-ass time for me to build a reputation in this business. Starting over doesn’t sound like loads of fun.

SW: Besides agreeing to this interview, what's the biggest mistake you've made as a writer? Or, what do you wish you'd known then that you know now?

CH: I dunno if I should answer this. I mean, I blundered into my dream job, and—on the off chance this is some kind of monkey’s paw scenario—I’d hate to jinx it.

I will say this, though. “A bad agent is worse than no agent at all” is a common refrain among writers for good reason. I understand the instinct to leap at your first offer of representation—after all, it’s what I did—but you’ve also gotta listen to your gut. If red flags abound during the courtship period, they sure as hell ain’t gonna vanish when you’re married.

SW: As a scientist-turned-novelist, you've clearly done your research and know your stuff. Is there some cool science-y thing you wanted to use, but had to cut from this book?

For those who aren’t familiar with the term, it’s just a fancy way of referring to the ecosystem of microorganisms that live in, on, and around each of us. Because your microbiota is influenced by your diet, body chemistry, and environment, it's as unique as a fingerprint—and, as such, it’ll likely be of tremendous value to the next generation of forensic scientists.

Imagine using cotton swabs and PCR to trace a dumped body to its primary murder scene, or determine whether, when, and for how long a victim and suspect interacted. If I could've figured out a way to work that in, I would've done it in a heartbeat.

Nerdy sidebar: many lay publications use “microbiota” and “microbiome” interchangeably. Technically, “microbiota” refers to microorganisms in a particular environment, while “microbiome” refers to the combined genetic material of microorganisms in a particular environment. Rather than bog CHILD ZERO down by digging into that, I just went with the correct—albeit slightly less popular—term. Apparently, I had no similar compunctions about bogging down this interview.

SW: This is a tight story you've told, though it involves many people. Any character you'd like to spin off into their own book?

CH: I adore hijabi NYPD detective Amira Hassan, and think a novel told from her perspective could be amazing. Problem is, I’m not the person to write it, because I lack the lived experience to do her story justice. Then again, if CHILD ZERO blows up huge, I’d be psyched to team up with somebody who could.

I’ve also toyed with the idea of a short story collection set in this world, because I cut tons of characters, subplots, and set pieces to keep CHILD ZERO lean. The trick would be to make them worth reading, rather than inessential bonus material, like deleted scenes on DVDs. 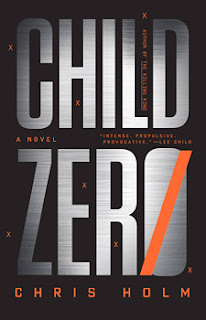 Get yours
Posted by Steve Weddle at 9:20 AM