Farewell to the Crime Commissary

In its seventy-nine years of existence, the Italian restaurant Forlini's, in Manhattan's Chinatown, a few steps away from the border with Little Italy, was probably the site of more crime-related discussions than just about any restaurant in existence.  It opened in 1943 and just closed last week, on March 31st, without much advance word as far as I could tell.  That was a pity because if I'd known it was closing, I would have gone one last time during its final days. It's a ten-minute walk from where I work in lower Manhattan, and even if it had been alone, I would have gone over for a final chicken parmigiana with spaghetti on the side, a glass of chianti or pinot grigio, depending on my mood, with that. 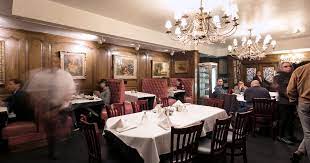 Forlini's was down the street from the Manhattan courts and Manhattan jail. Over the decades it became a favorite lunch spot of countless lawyers, judges, jurors, court reporters, and the like.  I discovered it through my father, a criminal lawyer and then judge whose professional life was in that lower Manhattan area for about sixty years.  One can only imagine the number of crimes and criminal cases discussed in Forlini's since it opened, the colorful characters who've eaten there, the bloody tales told.  In recent years, before the pandemic hit, the place with its old-school style bar even became a weekend hang-out for local hipsters, something I thought a good thing since it meant the restaurant had a new clientele, a source of new business.  In 2018, Vogue actually hosted its pre-Met gala party there. 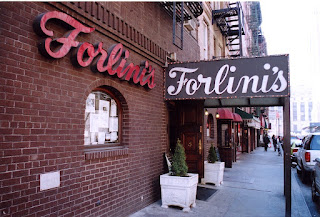 For the last 20 years or so, I would have lunch there with my father once every couple of months.  With me living in Brooklyn but working nearby and him living in the Bronx but coming down to the Manhattan Criminal Court as an administrative judge through his late seventies and then eighties, it was a perfect meeting point. The waiters there obviously knew the guy.  I remember when the first edition of my first novel, Spiders and Flies, came out, and also eating there that afternoon was long time Manhattan DA Robert Morgenthau (in his mid-eighties himself by then; talk about a place having a loyal and longstanding clientele), and my father gave Morgenthau a copy of the book I'd brought down to give to him.  The Manhattan District Attorney an early reader of mine? I doubt it.  But anyway, that was surprising and fun, just as it was a kick to eat in a booth where the plaque on the wall dedicated that booth to one Edwin Torres, the NY criminal court judge and author of excellent crime novels.  If ever there was a place where the old phrase, "If these walls could talk", applies, it was Forlini's.
Forlini's was not a casualty of the pandemic, by the way.  Seems the owners closed the restaurant and sold the property by choice.  Forlini's was a family-run, multi-generational establishment, and the current owners, "Big" Joe, Derek, and "Little" Joe, basically just said, "Well, it's time."
Addio!
Posted by scott adlerberg at 7:46 AM