"The Low White Plain", my entry in Frank Zafiro's longrunning A GRIFTER'S SONG series, will be coming from Down and Out Books on June 1st, and, today, I get to share the cover, description, and the first blurbs.

In the coming weeks, I'll be on here talking about a few things related to the book, but the first thing you need to know is what the hell this thing is even about, so here's the back cover copy:

Terrified and on the run after a disastrous con in Dallas, grifters Sam and Rachel find themselves trapped by a blizzard in Nebraska. Low on cash and nerve, they find a local job that seems easy enough: orchestrate the fake kidnapping of a down-and-out academic, then split the ransom with the "victim."

But underneath all that open space, malice and hate breed quickly. Sam and Rachel soon discover everyone is lying, and that this simple job is a lot more complicated - and dangerous - than either of them expected.

Trapped by circumstance and need, the grifters find themselves hunted by occultist Neo-Nazis, extravagantly armed private security, a crazed art dealer with cartel connections, and some of the most powerful institutions in the state, all while another blizzard bears down.

Caught between family, faith, money, drugs and power, Sam and Rachel can only rely on their skills, and each other, or see their own blood spread atop the constantly falling snow.

In short, things are not going well for Sam and Rachel, and they're about to get a lot, lot, worse... But I like to think my character's bad times are actually a good time for my readers, and, thankfully, that seems to be the response!

Here's what the excellent James D.F. Hannah had to say about the book:

Set against the bleakest snowstorm this side of the Apocalypse, "The Low White Plain" bubbles with white-hot energy and tension that threatens to slit a throat with every turned page. Come for the neo-Nazis, religious fanatics, and gun nuts, but stay for Paul J. Garth's masterful exploration of two desperate criminals on the run. This is what they're talking about when they talk about "noir," and Garth knows its pulsing heartbeat—even as characters bleed out across the barren landscape.

James D.F. Hannah, Shamus-winning author of BEHIND THE WALL OF SLEEP and SHE TALKS TO ANGELS

Nick Kolakowski (whose seriously good Payback is Forever is out now, which I really encourage you to read) had some really nice things to say as well:

With "The Low White Plain", Paul J. Garth has crafted a lean, mean, bloody machine. It zips as fast as a bullet on a winter's day and delivers all the satisfactions of a con gone wrong.

- Nick Kolakowski, author of "Love & Bullets" and "Payback Is Forever."

And my collaborator (Yeah, we announced a little something over on Twitter), Dennis Tafoya says:

In "The Low White Plain", Paul J Garth delivers breakneck action and a taut, razor-sharp plot that pits a couple of savvy con artists against a vicious Nazi cult, murderous hired guns and an old mark out to collect a blood debt. Another excellent addition to the Grifter's Song saga.

Well goddamn, I think that sounds like a bloody good time, don't you?

But what's it going to look like, you're asking. Well, let's get to that right now.

Presenting, for the first time anywhere, the cover to "The Low White Plain": 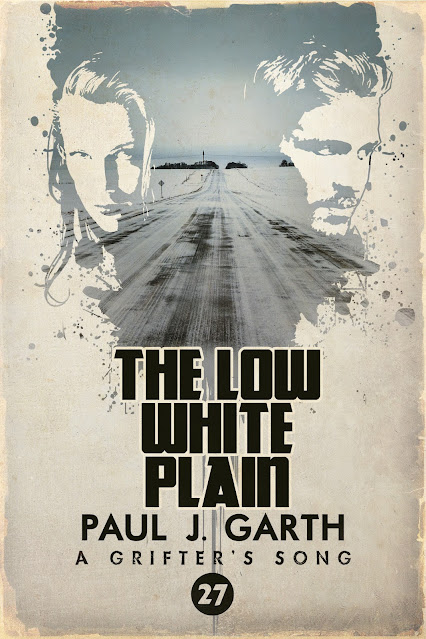 I'm thrilled with this cover, to be honest. The color tones, the key picture. All of it.
A lot of this book is about anxiety. How something within us drives us to try to control itself, while insisting that our lack of ability to control it is making everything worse. The other thing I was really writing about in this is Nebraska itself. How the land here, the soil, are running their own con on all those who would be hapless enough to stand atop it. This cover captures both those things (in part because we took direct inspiration from the most geographically specific and anxiety ridden album of all time, Springsteen's Nebraska).
I'll be back next week with something not related to "The Low White Plain" but then, after that, it's probably going to be the main thing I post about for a bit. But for now, thank you for checking out the cover and the blurbs. I really hope you're interested, or even excited, to read it.
"The Low White Plain" will be available on Kindle June 1st, with paperbacks dropping in early August.
Posted by Paul J. Garth at 8:00 AM